A graphic image of the planned landing site of the Rashid Rover.

The UAE is scheduled to launch its first moon mission in November 2022 aboard a SpaceX Falcon 9 rocket from Cape Canaveral in Florida.

The mission by Mohammed Bin Rashid Space Centre plans to send a rover named Rashid to the Moon in aboard ispace’s Hakuto-R lander.

The rover will land in Lacus Somniorum, the “Lake of Dreams”, close to the lunar equator.

Japan-based ispace inc that will take the rover and has been tasked for its landing said, “According to the current plan, ispace plans to launch its M1, part of the HAKUTO-R programme, as early as November 2022, on a SpaceX Falcon 9 rocket from Cape Canaveral, Fla. Upon its deployment from the rocket, the M1 lander will then carry multiple commercial and government payloads including two rovers to the surface of the Moon.”

Rashid Rover will be equipped with the latest technologies and innovative devices, and it is distinguished by its ability to resist the lunar surface temperature, which drops as minus as 173 degrees Celsius. 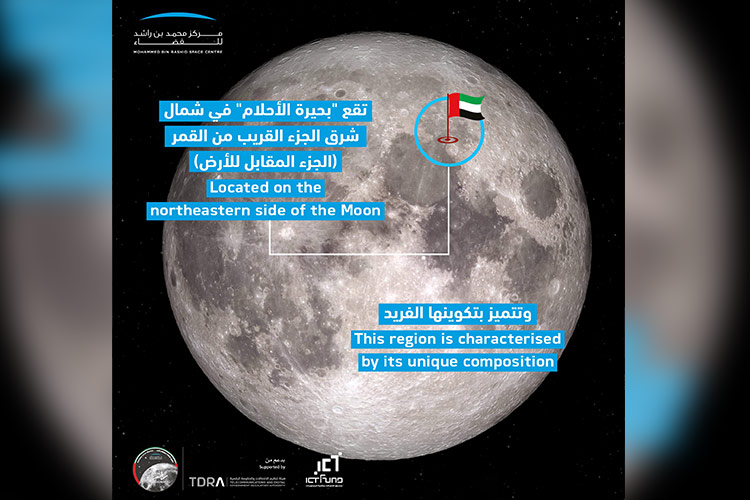 A graphic image of the planned landing site of the Rashid Rover.

The team revealed that the explorer, which will roam all over the surface of the moon, traveling between new sites that have not been studied before, over an extendable 14 Earth days, will capture thousands of images and data, using devices and technologies for the first time.

It will then send these images and data to the ground station of Mohammed Bin Rashid Space Centre.

The mission embodies the aspirations of the UAE in this field, by collecting images and information that allows the country to conduct comprehensive and integrated studies of how to build human settlement on the moon, prepare for future missions to study the red planet, and provide the scientific community with answers about the solar system, and other planets.

Rashid Rover will provide about 10 gigabytes of recorded material, scientific data, and new images, to the global scientific community. It aims to study the Moon’s plasma and to provide answers about the Moon dust, the lunar surface, mobility on the Moon’s surface and how different surfaces interact with lunar particles.

The technical team responsible for the mission will work hard to overcome potential challenges and difficulties, which include the difficulty of landing on the surface of the moon, which may affect the success of the scientific and research process.