Gabriella Uriegas, a soccer teammate of Tess Mata who died in the shooting, cries while holding her mother as they visit a makeshift memorial in Texas on Thursday. AFP

The UAE has strongly condemned the shooting that occurred in a school in the US state of Texas, resulting in a number of deaths and injuries of innocent students and teachers.

The Ministry of Foreign Affairs and International Cooperation (MoFAIC) affirmed the UAE’s strong condemnation of these criminal acts and its permanent rejection of all forms of violence and terrorism.

The Ministry expressed its sincere condolences to the US Government and people and to the families of the victims of this heinous crime, wishing a speedy recovery to all the injured.

Husband of teacher slain in Texas massacre dies due to grief 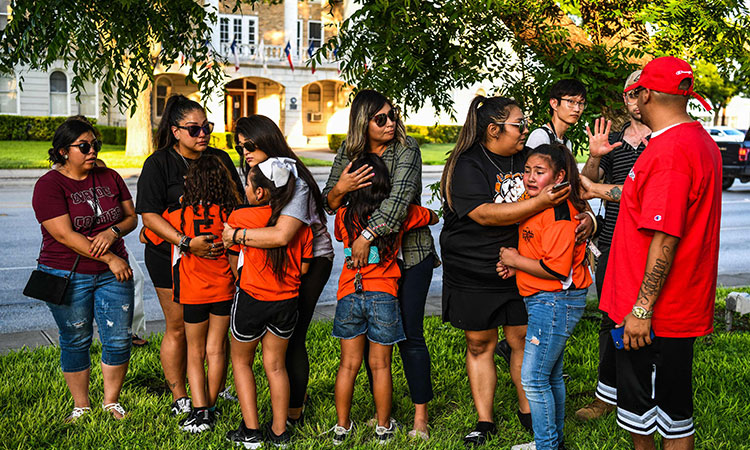 Soccer teammates of Tess Mata, who died in the shooting, cry, supported by their mothers, as they visit a makeshift memorial. AFP

The 18-year-old gunman who slaughtered 19 children and two teachers at a Texas elementary school barricaded himself inside a single classroom and “began shooting anyone that was in his way,” authorities said on Wednesday in detailing the latest mass killing to rock the US.

Law enforcement officers eventually broke into the classroom and killed the gunman, who used an AR-style rifle. Police and others responding to Tuesday’s attack also went around breaking windows at the school to enable students and teachers to escape, Lt. Christopher Olivarez of the Texas Department of Public Safety said on NBC’s “Today” show.

Olivarez told CNN that all the victims were in the same fourth-grade classroom at Robb Elementary.

The killer “barricaded himself by locking the door and just started shooting children and teachers that were inside that classroom,” he said. “It just shows you the complete evil of the shooter.”