Ukrainian President Volodymyr Zelensky accused the West of cowardice Sunday while another top official said Russia was trying to split the nation in two, like North and South Korea.

Zelensky made an exasperated plea for fighter jets and tanks to help defend his country from Russia’s invading troops. Russia now says its main focus is on taking control of the eastern Donbas region, an apparent pullback from its earlier, more expansive goals, but one which is raising fears of a divided Ukraine.

Speaking after US President Joe Biden said in a lacerating speech that Russian President Vladimir Putin could not stay in power — words the White House immediately sought to downplay — Zelensky lashed out at the West’s “ping-pong about who and how should hand over jets” and other weapons while Russian missile attacks kill and trap civilians. 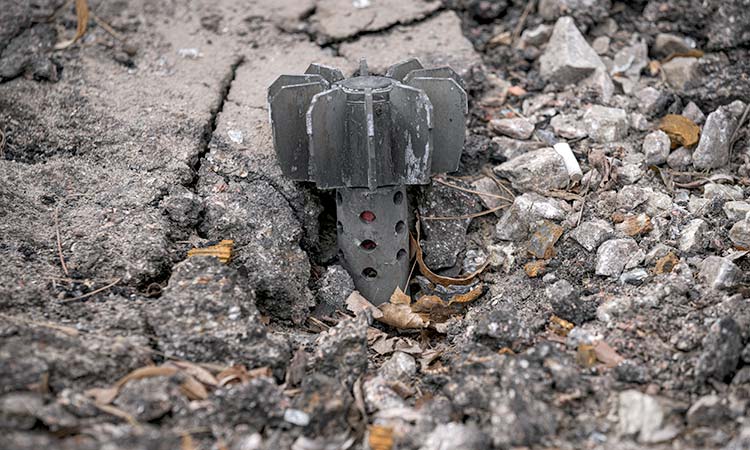 A part of a mortar shell sticks out of the asphalt in Stoyanka, Ukraine, on Sunday. AP

“I’ve talked to the defenders of Mariupol today. I’m in constant contact with them. Their determination, heroism and firmness are astonishing,” Zelensky said in a video address, referring to the besieged southern city that has suffered some of the war’s greatest deprivations and horrors. “If only those who have been thinking for 31 days on how to hand over dozens of jets and tanks had 1% of their courage.”

He told the reporters that the issue of neutrality — and agreeing to stay out of NATO — should be put to Ukrainian voters in a referendum after Russian troops withdraw. He said a vote could take place within a few months of the troops leaving. 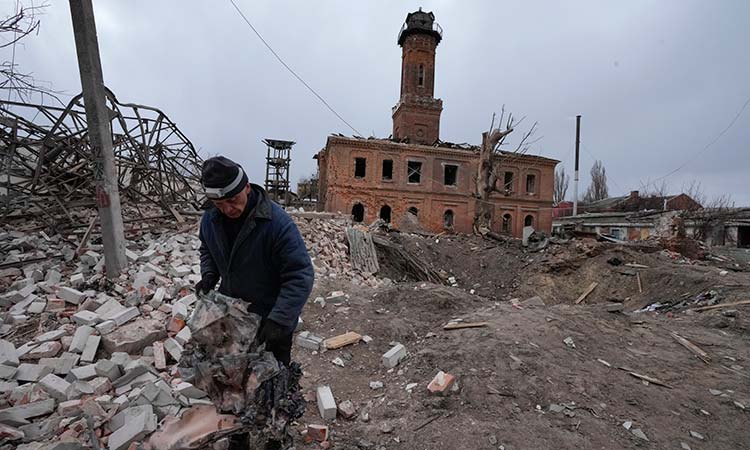 A man holds fragments of a rocket launched by the Russian forces at night in Kharkiv, Ukraine. AP

Russia quickly banned the interview from being published. Roskomnadzor, which regulates communications for Moscow, issued the ban, saying there could be action taken against the Russian media outlets that took part, which included “those that are foreign media outlets acting as foreign agents.”

Russia-based outlets appeared to comply with the ban although the interview was published abroad.

Zelensky responded by saying Moscow was afraid of a relatively short conversation with journalists. “It would be funny if it weren’t so tragic,” he said, according to the Ukrainian news agency RBK Ukraina.

At the Academy Awards ceremony in Los Angeles, attendees expressed support for Ukraine by falling silent for 30 seconds. Some arrived wearing blue-and-gold ribbons, the colors of the Ukrainian flag. Actor Sean Penn had unsuccessfully campaigned for Zelensky — a former actor — to speak at the ceremony. 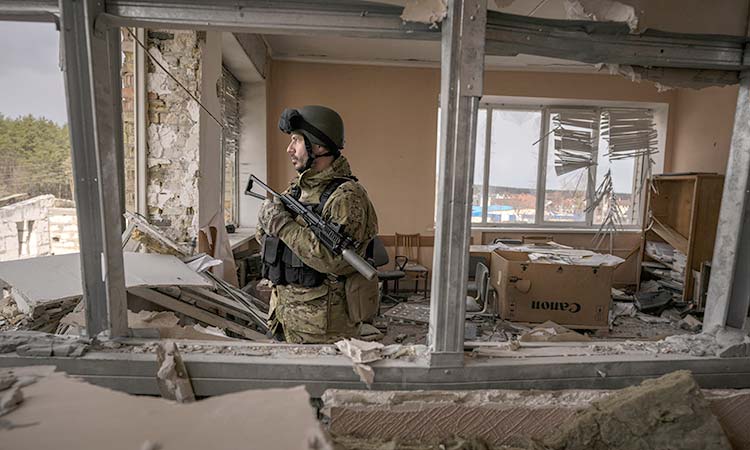 A Ukrainian serviceman stands in a heavily damaged building in Stoyanka, Ukraine, on Sunday. AP

Russia’s invasion of Ukraine has stalled in many areas. Its aim to quickly encircle the capital, Kyiv, and force its surrender has faltered against staunch Ukrainian resistance — bolstered by weapons from the US and other Western allies.

Moscow claims its focus is on wresting the entire eastern Donbas region, which has been partially controlled by Russia-backed separatists since 2014. A high-ranking Russian military official on Friday said that troops were being redirected to the east from other parts of the country.