Rescuers work at a site of an industrial building damaged by a Russian military strike in Bakhmut, Donetsk. Reuters

The advance of Russian forces raised fears that cities in the region would undergo the same horrors inflicted on the people of the port city Mariupol in the weeks before it fell.

The fighting Friday focused on two key cities: Sievierodonetsk and nearby Lysychansk. They are the last areas under Ukrainian control in Luhansk, one of two provinces that make up the Donbas and where Russia-backed separatists have already controlled some territory for eight years. Authorities say 1,500 people in Sievierodonetsk have already died since the war’s start three months ago. Russia-backed rebels also said they’d taken the railway hub of Lyman. 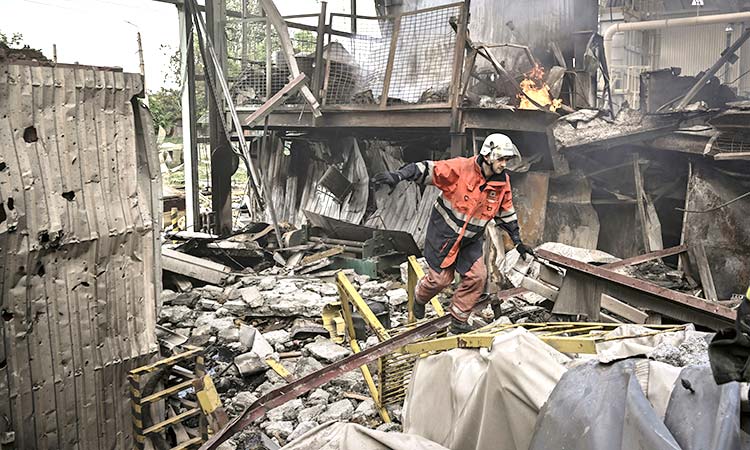 A fireman participates in extinguishing a fire at a Gypsum Manufactory plant after shelling in Bakhmut, Donbas. AFP

The governor of Luhansk warned that Ukrainian soldiers may have to retreat from Sievierodonetsk to avoid being surrounded. But he predicted an ultimate Ukrainian victory. “The Russians will not be able to capture Luhansk region in the coming days, as analysts predict,” Serhiy Haidai wrote on Telegram on Friday. “We will have enough forces and means to defend ourselves.’’

Ukrainian President Volodymyr Zelesnsky also struck a defiant tone. In his nightly video address Friday, he said: “If the occupiers think that Lyman or Sievierodonetsk will be theirs, they are wrong. Donbas will be Ukrainian.’’

For now, Sievierodonetsk Mayor Oleksandr Striuk told the media that “the city is being systematically destroyed – 90% of the buildings in the city are damaged.” 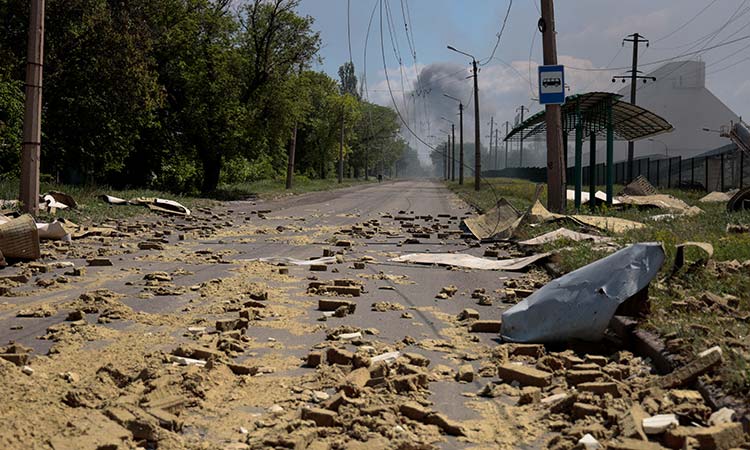 Debris is seen in a street after a Russian military strike in the town of Bakhmut, in Donetsk region. Reuters

Striuk described conditions in Sievierodonetsk reminiscent of the battle for Mariupol, located in the Donbas’ other province, Donetsk. Now in ruins, the port city was constantly barraged by Russian forces in a nearly three-month siege that ended last week when Russia claimed its capture. More than 20,000 of its civilians are feared dead.

Before the war, Sievierodonetsk was home to around 100,000 people. About 12,000 to 13,000 remain in the city, Striuk said, huddled in shelters and largely cut off from the rest of Ukraine. At least 1,500 people have died there because of the war, now in its 93rd day. The figure includes people killed by shelling or in fires caused by Russian missile strikes, as well as those who died from shrapnel wounds, untreated diseases, a lack of medicine or being trapped under rubble, the mayor said. 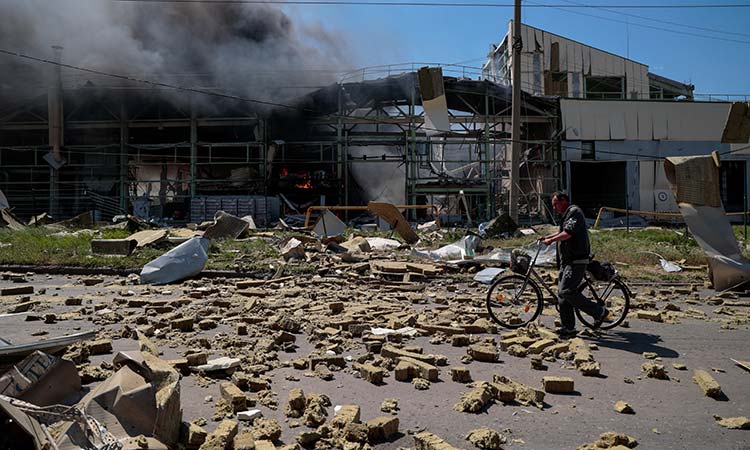 A local resident walks past an industrial building damaged by a Russian military strike in Donetsk. Reuters

In the city’s northeastern quarter, Russian reconnaissance and sabotage groups tried to capture the Mir Hotel and the area around it, Striuk said.

Hints of Russia’s strategy for the Donbas can be found in Mariupol, where Moscow is consolidating its control through measures including state-controlled broadcast programming and overhauled school curricula, according to an analysis from the Institute for the Study of War, a Washington think tank.