Ukrainian forces have launched a counteroffensive near the Russian-held town of Izium in eastern Ukraine, a regional governor said on Saturday, in what could prove a serious setback for Moscow’s plans to capture the entire Donbas region.

Russian forces have focused much of their firepower on the Donbas in a “second phase” of their invasion that was announced on April 19, after they failed to reach the capital Kyiv from the north in the early weeks of the war.

But Ukraine has been retaking territory in its northeast, driving the Russians away from the second-largest Ukrainian city of Kharkiv. Keeping up pressure on Izium and Russian supply lines will make it harder for Moscow to encircle battle-hardened Ukrainian troops on the eastern front in the Donbas.

Russia’s defence ministry said its forces hit a series of military sites, including in the Donbas, killing at least 100 Ukrainian “nationalists.” 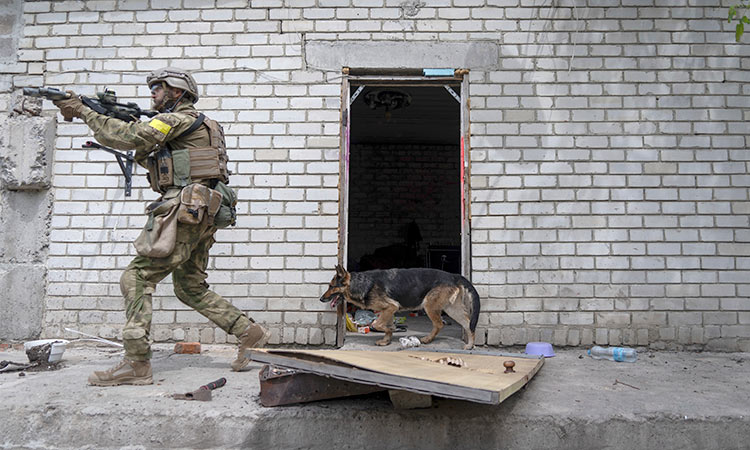 A Ukrainian serviceman patrols in a recently retaken village on the outskirts of Kharkiv on Saturday. AP

Reuters could not independently verify the report. Ukrainian President Volodymyr Zelensky said the situation in Donbas remained very difficult, adding that Russian forces were still trying to salvage some kind of victory there.

“They are not stopping their efforts,” he said.

Later Saturday, Ukraine’s Kalush Orchestra won the popular Eurovision Song Contest in Italy, a sign of how European public sentiment has swung in Kyiv’s favour since Russian forces launched an all-out assault against the country in February.

Ukraine were in fourth place based on jury voting but viewer support catapulted the country into first place.

“Our courage impresses the world, our music conquers Europe! Next year Ukraine will host the Eurovision song contest,” Zelenskiy said in an online message. 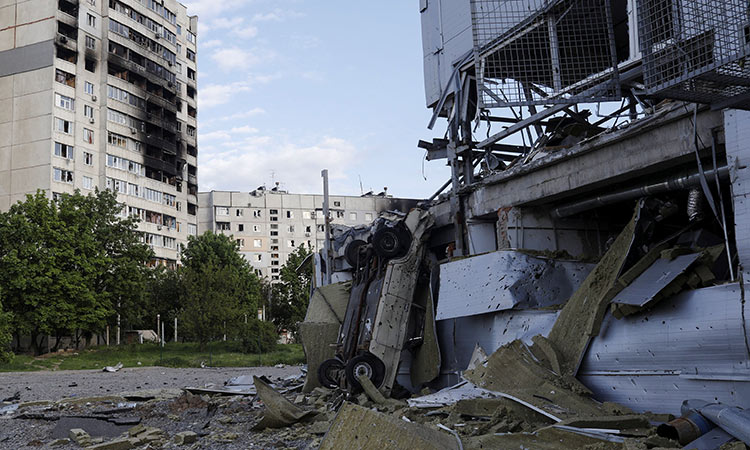 Eurovision’s winners traditionally get to host the event the following year.

In another token of international solidarity, US Republican senators paid an unannounced visit to Kyiv. The Republican delegation discussed further strengthening sanctions on Russia, Zelensky said.

As well as losing large numbers of men and much military equipment, Russia has been hit by economic sanctions. The Group of Seven leading Western economies pledged in a statement on Saturday to “further increase economic and political pressure on Russia” and to supply more weapons to Ukraine.

“Our armed forces have switched to a counteroffensive there. The enemy is retreating on some fronts and this is the result of the character of our armed forces,” he said.