Ukrainian President Volodymyr Zelensky attends a meeting on the current situation in the region. AFP

President Volodymyr Zelensky will urge world powers to step up their support for Ukraine when he addresses the G7 summit on Monday, as Kyiv reels from the first Russian strikes on the capital in weeks.

US President Joe Biden and his counterparts from the Group of Seven wealthy democracies, meeting in the Bavarian Alps, have stressed their unity in the face of Russia’s aggression — even as the global fallout worsens.

Zelensky is set to join the leaders of the United States, Germany, Britain, France, Italy, Japan and Canada via video link at 10:00 am (0800 GMT).

In his daily address late Sunday, Zelensky renewed his calls for more weapons and air defence systems to be delivered to Ukraine and for fresh sanctions against Russia by G7 nations. 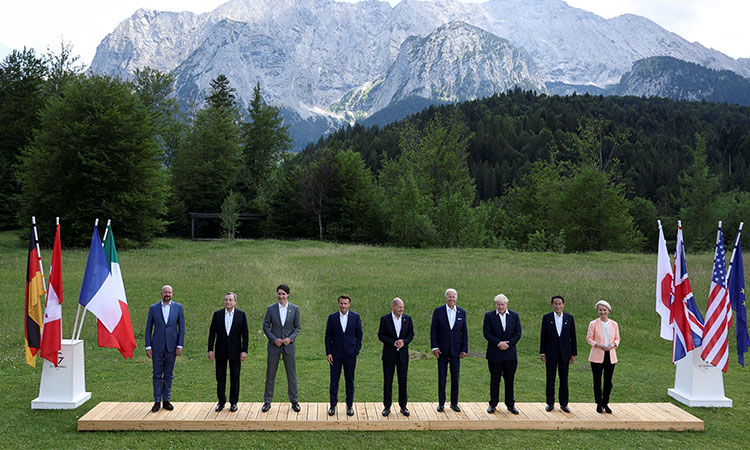 G7 leaders line up for a family photo at Schloss Elmau castle, during the summit near Garmisch-Partenkirchen. Reuters

“We need a powerful air defence — modern, fully effective. Which can ensure complete protection against these missiles. We talk about this every day with our partners. There are already some agreements. And partners need to move faster if they are really partners, not observers,” he said.

“Delays in the transfer of weapons to our state, any restrictions are actually an invitation for Russia to strike again and again.”

Zelensky’s appeal came after Russia struck a residential building in Kyiv, Ukraine said, leaving one person dead and wounding four others including a seven-year-old girl.

Biden condemned the strikes, the first on the Ukrainian capital in almost three weeks, as “barbarism”.

German Chancellor and G7 host Olaf Scholz said the attack showed again “that it is right to stand together and support Ukrainians”. 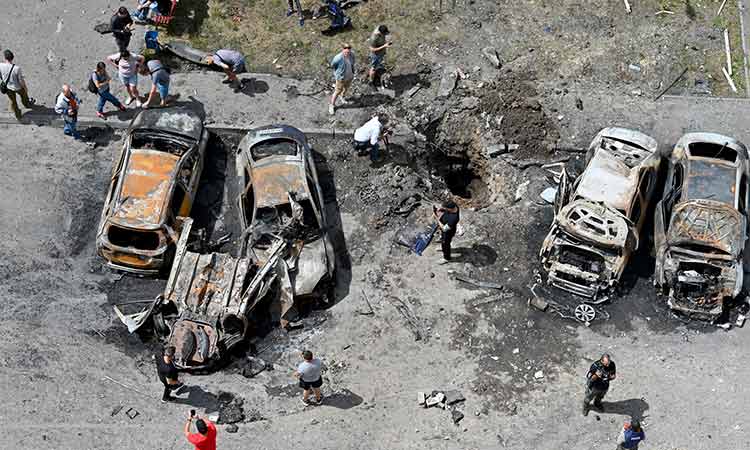 Bystanders gather around the wreckage of vehicles and a crater after Russian missiles struck Kharkiv. AFP

Russia denied it had hit a civilian target, however, saying its forces had struck the Artyom weapons factory in the neighbourhood.

The G7 summit, held at the picturesque Elmau Castle, runs until Tuesday. It will be followed by a meeting of NATO countries in Spain, which Zelensky is also expected to dial into.

G7 members kicked off their gathering on Sunday by announcing a ban on imports of Russian gold, the latest in a series of sanctions aimed at crippling President Vladimir Putin’s war effort. 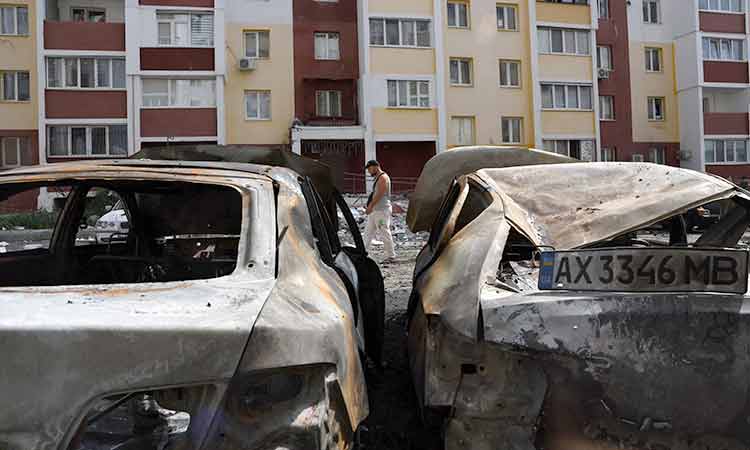 A man walks past burned-out cars near a crater left in the aftermath of overnight shelling in Kharkiv, Ukraine. Reuters

British Prime Minister Boris Johnson warned his fellow G7 leaders not to give in to “fatigue” and said Ukraine would need long-term help.

The conflict has already triggered a food and energy crisis that has sent inflation soaring and fanned recession fears, including among Kyiv’s Western allies.

Downing Street said Johnson on Monday would call for “urgent action” to get Ukraine’s vital cereal exports moving again, which have been held up by Russia’s blockade of key ports.

With millions of tonnes of grain trapped in silos, concerns are growing that countries in northern Africa and the Middle East that are highly reliant on Ukrainian exports could face famine.

Non-G7 countries Argentina, Indonesia, India, Senegal and South Africa have been invited to join the G7 summit from Monday. 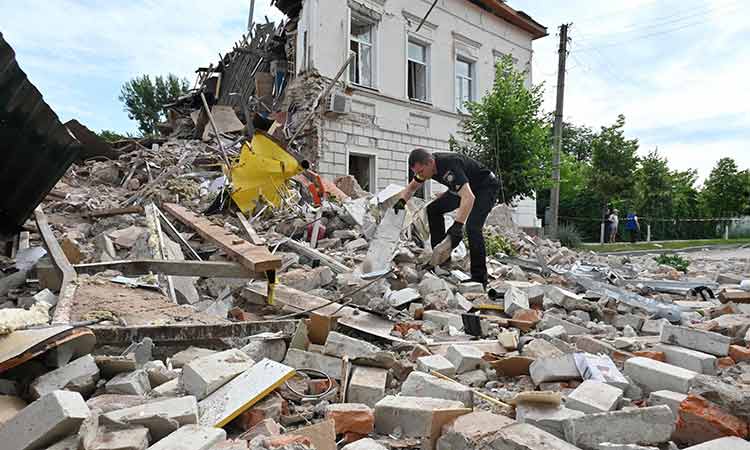 A policeman searches through the wreckage of a building after the explosion of a Russian rocket in Kharkiv. AFP

Indonesian President Joko Widodo, who will host a G20 summit in November, has said he plans to use the trip to also visit Ukraine and Russia in the coming days to ask Putin and Zelensky to open a dialogue for peace.

Indonesia, like most major emerging economies, has tried to maintain a neutral position, and Widodo has not bowed to Western pressure to exclude Putin from the November meeting.