A man walks past a fire after a shelling, as Russia’s attack on Ukraine continues, in Kharkiv. File / Reuters

Russian forces tried to ford a river from the ruined eastern factory city of Sievierodonetsk but Ukrainian troops were still holding out there as Russia’s assault on its neighbour reached its 100th day on Friday.

Ukraine’s defence minister said his soldiers were already training in Europe to operate new, advanced missile systems pledged this week by the United States and Britain, which Kyiv hopes will help swing the battle in its favour.

Ukrainian forces have recaptured around 20% of the territory they lost in the city of Sievierodonetsk during fighting with Russia, the head of the eastern region of Luhansk said on Friday.

“Whereas before the situation was difficult, the percentage (held by Russia) was somewhere around 70%, now we have already pushed them back by approximately 20%,” Serhiy Gaidai told national television.

A war that Western countries believe Russia planned to win within hours has ground on for more than three months, with Moscow having been driven back from the capital launching a huge new assault in the east at a cost of thousands of lives and disruption to the global economy. 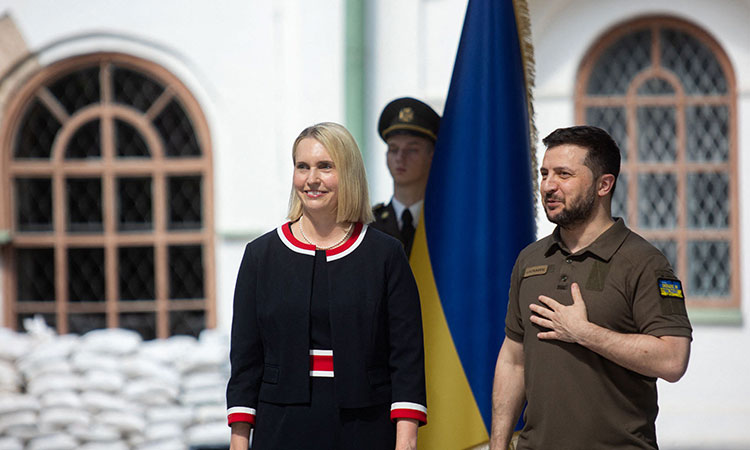 Reuters reached Sievierodonetsk on Thursday and was able to verify that Ukrainians still held part of the city. Troops drove towards a plume of black smoke at high speed over roads littered with wrecked armoured vehicles. One soldier sat in the back seat, his face streaked with blood from injuries. At another location in the city, Ukrainian troops, including foreign volunteers, unloaded weapons from a truck.

“We’re gonna push the Russians back. It will take a day, a month, or a year it does not fucking matter. We are on the right side of history,” said Zurab Kakalidze, a Georgian who described himself as “just a 22-year-old kid.”

French President Emmanuel Macron on Friday said his Russian counterpart Vladimir Putin had committed a “historic and fundamental error” by invading Ukraine and was now “isolated.” “I think, and I told him, that he made a historic and fundamental error for his people, for himself and for history,” he said in an interview with French regional media.

“I think he has isolated himself,” Macron said. “Isolating oneself is one thing, but being able to get out of it is a difficult path.” The French president repeated that Russia should not be “humiliated… so that the day the fighting stops we can pave a way out through diplomatic means.” Macron also said he did not “rule out” a visit to Kyiv.

Two Reuters journalists were injured and a driver killed after their vehicle came under fire as they tried to reach Sievierodonetsk from an area controlled by Russian-backed separatists.

The past weeks have seen Russia pour forces into the battle for the city known for its large chemicals factory, and which Russia must capture to achieve its stated aim of holding all of Luhansk province. Both sides have been taking punishing losses there in a street-by-street battle that could set the trajectory for a long war of attrition.

“I regret to say that the Russian army succeeded in making its way deep into the city… they control most of the city,” regional governor Serhiy Gaidai said in televised comments overnight.

He said about a fifth of the city was now a contested “grey zone.” Ukrainian fighters were holding out in one area and were still able to clear Russians out of some streets, he said.

“So I would tell sceptics not to write off Sievierodonetsk. It’s too early to do that.”

Russian soldiers advanced towards Lysychansk, across the river from Sievierodonetsk, but were held back and retreated, Ukraine’s military general staff said.

Donetsk will not fall quickly, but needs more weapons to keep the attackers at bay, Kyrylenko said.

Washington said this week it expected Ukrainians would need three weeks of training to use the rockets, whose range of up to 80 km (50 miles) could help negate Russia’s artillery fire-power advantage.

US President Joe Biden told reporters a negotiated settlement in Ukraine would be needed at some point, but that in the meantime the United States would help the Ukrainians defend themselves.

Ukraine’s President Volodymyr Zelenskiy, said in an overnight address that Kyiv was expecting more “good news” on foreign arms, after the latest $700 million US weapons package for Ukraine. “Victory will be ours,” he said later on Friday in a video address from outside his Kyiv office to mark 100 days of the war.

UAE economy expected to grow by over 5 percent this year: UBS