A view of the city of Mariupol, Ukraine on Tuesday. AFP

Ukrainian President Volodymyr Zelensky said Kyiv’s military has made small gains in the east, pushing Russian forces out of four villages near Kharkiv, as his country’s foreign minister suggested Ukraine could go beyond just forcing Russia back to areas it held before the invasion began 11 weeks ago.

Foreign Minister Dmytro Kuleba voiced what appeared to be increasing confidence — and expanded goals — amid Russia’s stalled offensive in the east, telling the Financial Times that Ukraine initially believed victory would be the withdrawal of Russian troops to positions they occupied before the Feb. 24 invasion. But that’s no longer the case.

Russian ambassador doused in red by anti-war protesters in Poland

“Now if we are strong enough on the military front, and we win the battle for Donbas, which will be crucial for the following dynamics of the war, of course the victory for us in this war will be the liberation of the rest of our territories,” Kuleba said. 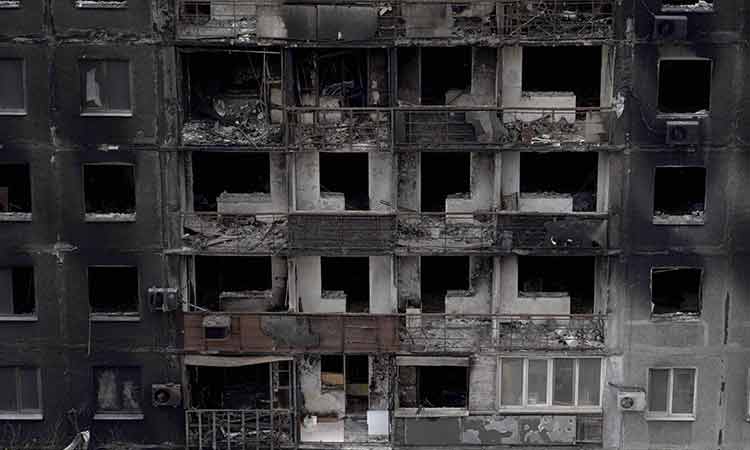 Russian forces have made advances in the Donbas and control more of it than they did before the war began. But Kuleba’s statement — which seemed to reflect political ambitions more than battlefield realities — highlighted how Ukraine has stymied a larger, better-armed Russian military, surprising many who had anticipated a much quicker end to the conflict.

One of the most dramatic examples of Ukraine’s ability to prevent easy victories is in Mariupol, where Ukrainian fighters holed up at a steel plant have denied Russia full control of the city. The regiment defending the plant said Russian warplanes continued bombarding it, striking 34 times in 24 hours.

In recent days, the United Nations and the Red Cross organized a rescue of what some officials said were the last civilians trapped at the plant. But two officials said Tuesday that about 100 were believed to still be in the complex’s underground tunnels. Donetsk regional Gov. Pavlo Kyrylenko said those who remain are people “that the Russians have not selected” for evacuation. 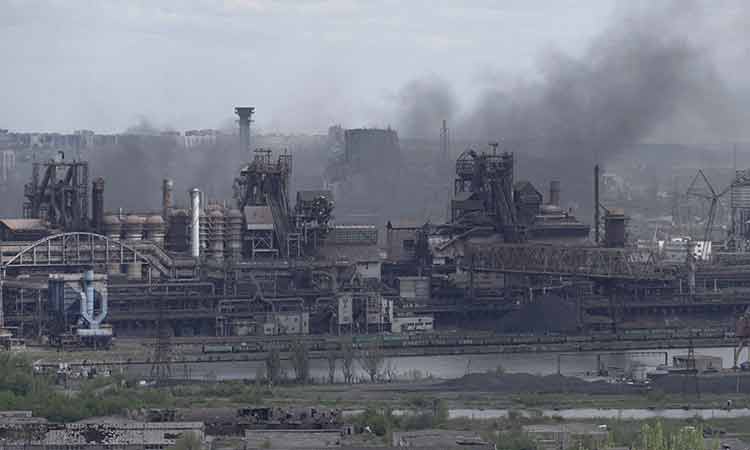 A view of the Azovstal steel plant in the city of Mariupol on Tuesday. AFP

Kyrylenko and Petro Andryushchenko, an adviser to Mariupol’s mayor, did not say how they knew civilians were still in the complex – a warren of tunnels and bunkers spread over 11 square kilometres (4 square miles). Others said their statements were impossible to confirm.

Fighters with the Azov regiment released photos of their wounded comrades inside the plant, including some with amputated limbs. They said the wounded were living in unsanitary conditions “with open wounds bandaged with non-sterile remnants of bandages, without the necessary medication and even food.”

In its statement on Telegram, the regiment appealed to the UN and Red Cross to evacuate the wounded servicemen to Ukrainian-controlled territories.

The photos could not be independently verified. 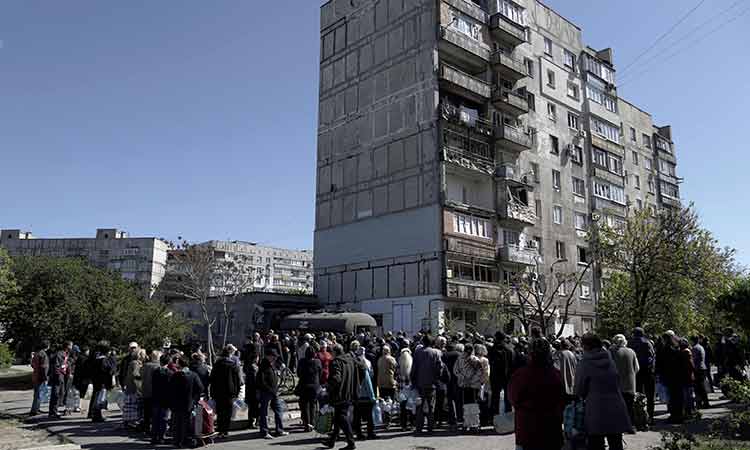 Residents queue to get water in the city of Mariupol on Tuesday. AFP

Ukraine said on Tuesday that Russian forces fired seven missiles at Odesa a day earlier, hitting a shopping centre and a warehouse in the country’s largest port. One person was killed and five wounded, the military said.

Images showed a burning building and debris — including a tennis shoe — in a heap of destruction in the city on the Black Sea. Mayor Gennady Trukhanov later visited the warehouse and said it “had nothing in common with military infrastructure or military objects.”

See how this Indonesian security guard survives a lightning strike