A dockyard worker watches as barley grain is mechanically poured into a ship in Nikolaev, Ukraine. File/Reuters

UN chief Antonio Guterres is expected to publicly disclose on Wednesday that he is in talks with Russia, Ukraine, Turkey, the United States and the European Union aimed at restoring Ukraine grain shipments and reviving fertilizer exports from Russia and Belarus, UN officials said.

The war in Ukraine has fueled soaring global prices for grains, cooking oils, fuel and fertilizer, and Guterres has warned it will worsen food, energy and economic crises in poor countries.

Ukraine, a major agricultural producer, used to export most of its goods through seaports but since Russia’s Feb. 24 invasion it has been forced to export by train via its western border or via its small Danube river ports.

After visiting Moscow and Kyiv late last month, Guterres pledged to help bring back to world markets the agriculture production of Ukraine and the food and fertilizer production of Russia and Belarus despite the war. 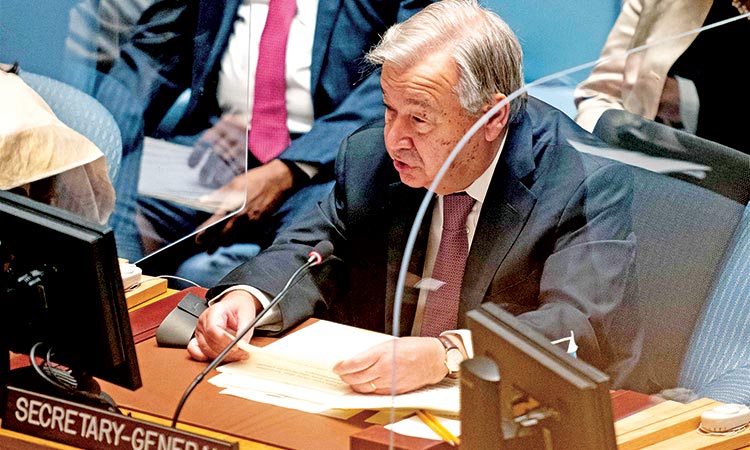 Guterres is expected to discuss his efforts at a “Global Food Security Call to Action” ministerial meeting hosted by US Secretary of State Antony Blinken at the United Nations in New York later on Wednesday. Blinken will also chair a Security Council meeting on conflict and food security on Thursday.

“Their blockade of ports not allowing food and wheat to leave Ukraine, their efforts to keep farmers from planting their farms, their attacks on food silos – all of this has contributed to an already dire situation,” Thomas-Greenfield told a UNICEF event on Tuesday.

Russia and Ukraine together account for nearly a third of global wheat supplies. Ukraine is also a major exporter of corn, barley, sunflower oil and rapeseed oil, while Russia and Belarus — which has backed Moscow in its war in Ukraine — account for more than 40% of global exports of crop nutrient potash.

Guterres has said 36 countries count on Russia and Ukraine for more than half of their wheat imports, including some of the poorest and most vulnerable in the world, including Lebanon, Syria, Yemen, Somalia and Democratic Republic of Congo.