A photograph shows a downed bridge which connects with Severodonetsk city in Donbas region. File/AFP

The Russian military said it used long-range missiles on Wednesday to destroy a depot in the western Lviv region of Ukraine where ammunition for NATO-supplied weapons was stored, and the governor of a key eastern city acknowledged Russian forces are advancing in heavy fighting.

The battle for Sievierodonetsk in Ukraine’s eastern Donbas area has become the focus of Russia’s offensive in recent weeks.

Russia-backed separatists accused Ukrainian forces of sabotaging an evacuation of civilians from the city’s besieged Azot chemical plant, where about 500 civilians and an unknown number of Ukrainian fighters are believed to be sheltering from missile attacks. It wasn’t possible to verify that claim.

Germany is providing Ukraine with three multiple launch rocket systems of the kind that Kyiv has said it urgently needs to defend itself against Russia’s invasion. Defence Minister Christine Lambrecht said Wednesday that Germany will transfer three M270 medium-range artillery rocket systems along with ammunition. 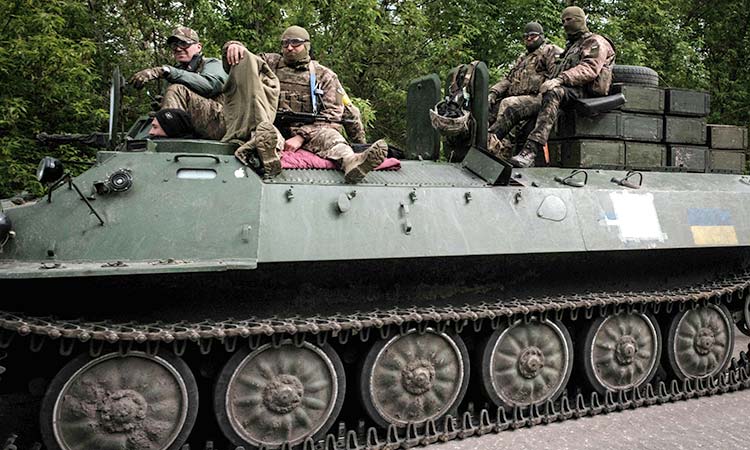 President Joe Biden said Wednesday the US will send an additional $1 billion in military aid, the largest single tranche of weapons and equipment since the war began. The aid will include anti-ship missile launchers, howitzers and more rounds for the High Mobility Artillery Rocket Systems – all key weapons systems that Ukrainian leaders have urgently requested.

Germany said the transfer, which echoes similar moves by Britain and the United States, will be accompanied by training and will have “a swift and significant battlefield impact.”

Russian officials had announced a humanitarian corridor from the Azot plant a day earlier, but said they would take civilians to areas controlled by Russian, not Ukrainian, forces.

The Ukrainian governor of Luhansk, Serhiy Haidai, told the media that “heavy fighting in Sievierodonetsk continues today as well.” The Luhansk and Donetsk regions make up the Donbas. 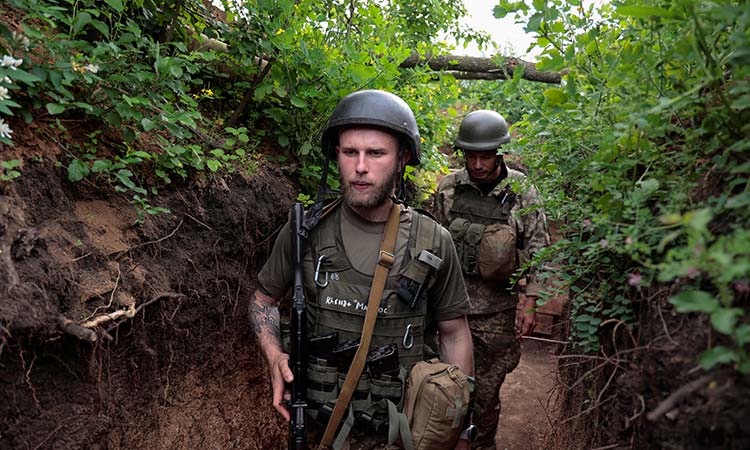 Ukrainian servicemen walk in a trench at a position near a frontline in Donetsk Region, Ukraine. File/Reuters

The situation in the city is getting worse, Haidai said, because Russian forces have more manpower and weapons. “But our military is holding back the enemy from three sides at once,” he added.

In the Lviv region near the border with NATO member Poland, Russian forces used high-precision Kalibr missiles to destroy the depot near the town of Zolochiv, Russian Defense Ministry spokesman Igor Konashenkov said. Konashenkov said shells for M777 howitzers, a type supplied by the United States, were stored there. He said four howitzers were destroyed elsewhere and that Russian airstrikes also destroyed Ukrainian “aviation equipment” at a military aerodrome in the southern Mykolaiv region.

Ukrainian officials did not immediately comment on the Zolochiv strike.