President Joe Biden has arrived in Israel for the first visit to the Middle East of his presidency. It’s a whirlwind four-day trip in which he will hold talks with Israeli, Palestinian, and Saudi Arabian officials.

Biden is spending two days in Jerusalem for talks with Israeli leaders before meeting Palestinian President Mahmoud Abbas on Friday in the West Bank. He then heads to Saudi Arabia.

Israel’s caretaker prime minister, Yair Lapid, who greeted Biden at the airport, has said talks “will focus first and foremost on the issue of Iran.” 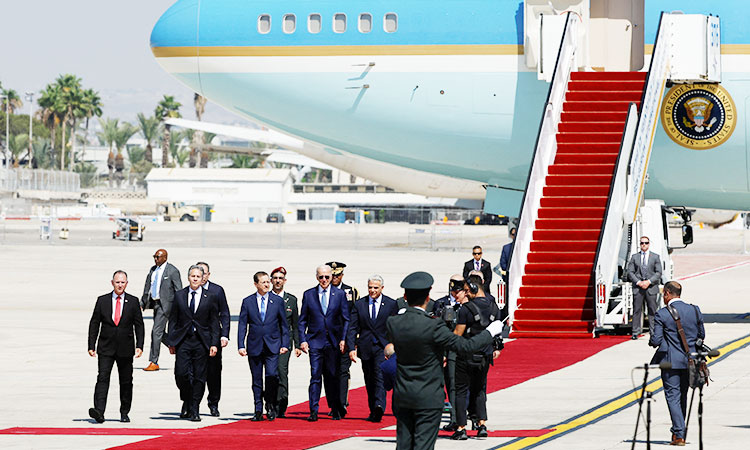 Iran’s President Ebrahim Raisi warned that if Biden’s goal on the trip was to bolster Israel’s security, he was destined to fail. “If the visits of the American officials to the countries of the region are to strengthen the position of the Zionist regime… their efforts will not create security for the Zionists in any way,” Raisi said, referring to Israel.

Moments after Biden landed, Israel’s military was to show him its new Iron Beam system, an anti-drone laser it claims is crucial to countering Iran’s fleet of unmanned aerial vehicles.

Israeli police fanned out across central Jerusalem on Wednesday, with major roads closed as Air Force One touched down.

Israel has raised 1,000 flags across Jerusalem to welcome the US leader, who has not reversed former president Donald Trump’s controversial decision to recognise the city as the capital of Israel.

Palestinians claim Israeli-annexed east Jerusalem as their capital and, ahead of the visit, accused Biden of failing to make good on his pledge to restore the US as an honest broker in the conflict.

“We only hear empty words and no results,” said Jibril Rajoub, a leader of the secular Fatah movement of President Mahmoud Abbas.

Biden will meet Abbas in the occupied West Bank city of Bethlehem on Friday, but there is no expectation of bold announcements towards a fresh peace process, meaning the visit could end up deepening Palestinian frustration.

Biden is scheduled to have a short meeting on Thursday with Israel’s former prime minister Benjamin Netanyahu, who will try to reclaim power in the upcoming polls.