Sheikh Hamdan and Matter Al Tayer pose for a photograph during the opening ceremony of the road.

Speaking on the occasion of the opening, Sheikh Hamdan said: “Dubai continues to advance the implementation of infrastructure development plans aimed at enhancing human welfare and catalysing sustainable economic growth.

It is also part of our broader strategy to transform Dubai into the world’s best place to live, work and visit as well as strengthen our readiness to meet future needs in one of the fastest growing cities worldwide.”

Sheikh Hamdan further said that the government has always placed the highest priority on constantly improving Dubai’s road infrastructure, since it plays an important role in raising the emirate’s competitiveness in addition to creating an attractive business and investment environment and providing a high quality of life for the community.

Hamdan noted that by expediting the pace of its infrastructure development, Dubai has put itself at the forefront of global economic recovery and created a strong foundation for sustained development in the next phase of the emirate’s growth. 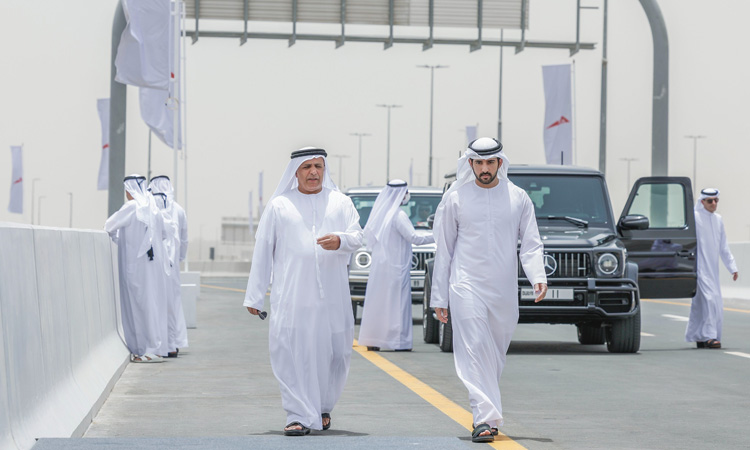 The scope of the Dubai-Al Ain Road Improvement Project spans 17 km from the intersection of Emirates Road to the intersection of Ras Al Khor Road along the Dubai-Al Ain Road. Construction works included widening the road from three to six lanes in each direction, and constructing six main interchanges along with bridges and ramps stretching 11.5 km.

Upon arrival at the project site, Sheikh Hamdan was received by Mattar Al Tayer, Director-General, Chairman of the Board of Executive Directors of the Roads and Transport Authority (RTA).

Sheikh Hamdan was briefed by Al Tayer about the project, which will ease traffic flow and improve links with the Sheikh Mohammed Bin Zayed Road, Sheikh Zayed Bin Hamdan Al Nahyan Road, and Emirates Road, besides serving the current and future development projects on both sides of the Dubai-Al Ain Road.

Benefits to the community

The project will benefit a population of 1.5 million living or working in the neighbourhood on both sides of the road. It also serves 25 universities and colleges where a total of 27,500 students are enrolled. The improvements will double the intake of the road from 12,000 to 24,000 vehicles per hour in both directions.

It will also slash the travel time on the Dubai-Al Ain Road from the intersection of Ras Al Khor Road to the intersection of the Emirates Road by 50% from 16 minutes to eight minutes during peak time. Furthermore, it will solve traffic snarls that used to extend about two kilometres.

Projects Underway Hamdan was also briefed on two projects under construction. The first is the Al Manama Street Improvement Project where the existing roundabouts will be transformed into signalised junctions. Construction for the project is expected to be completed in September.

Four ramps Outlining the project’s highlights, Al Tayer said, “The improvement of the Dubai-Al Ain Project included the construction of four two-lane ramps at the junction of Sheikh Mohammed Bin Zayed Road extending 2,600 metres to ensure free and smooth traffic movement in all directions at the junction.

The previous bridge on Sheikh Mohamed Bin Zayed Road had been improved to allow for the widening of the Dubai-Al Ain Road from three to six lanes in each direction in addition to the construction of service roads on both sides of the road.

The total capacity of bridges at the junction will jump to 36,000 vehicles per hour in all directions, which will ensure smooth traffic flow on the Sheikh Mohammed bin Zayed Road from Al Qusais in the direction of Al Ain.”

Works included widening the road from three to six lanes in each direction and constructing service roads on both sides to enhance traffic safety levels.

These junctions facilitate smooth traffic flow and serve the residential communities on both sides of the road such as the Academic City, Dubai Silicon Oasis, Dubailand Residential Complex, Liwan, and the Dubai Design District. The bridges at the six junctions stretch 6,600 metres in length and their ramps span 4,900 metres in total.

Works also included improving the existing ramp to serve inbound traffic movement from the Dubailand Residential Complex heading westwards to the Dubai-Al Ain Road in the direction of Dubai.

Additionally, works included the construction of a new 528-metre ramp to serve inbound traffic from Dubai heading northwards to the Academic City and the Dubai Silicon Oasis. Service roads have been constructed on both sides of the road along with turns to serve other traffic movements and development projects.