A screengrab of the ceremony at a local hotel in Lahore on Wednesday.

After the Punjab Assembly (PA) was on Wednesday sealed off with barbed wires and the building’s main gate was locked, leader of the opposition in PA Hamza Shahbaz Sharif was “elected as the chief minister” of the province with 199 votes during a “symbolic” session at a hotel in Lahore on Wednesday, local media reported.

The legality of the session and Hamza’s subsequent “victory” was unclear as the session was held outside the Punjab Assembly and attended only by opposition lawmakers, while neither Speaker Parvez Elahi nor Deputy Speaker Sardar Dost Muhammad Mazari presided over it.

Furthermore, no notifications regarding the change of session’s venue or Hamza’s “victory” were issued by the Punjab Assembly secretariat.

The provincial lawmakers extended their support by standing up during the voting, declaring Hamza the chief minister of the country’s largest province.

Hamza went to the “symbolic visitor’s gallery” to thank Maryam Nawaz for her support. Maryam also took to Twitter to congratulate her cousin on the victory.

The symbolic session was presided over by Shazia Abid, who was among the panel of chairmen announced by Pervaiz Elahi on April 3.

In videos shared on social media platforms, teary-eyed Maryam can be seen hugging Hamza while congratulating him. 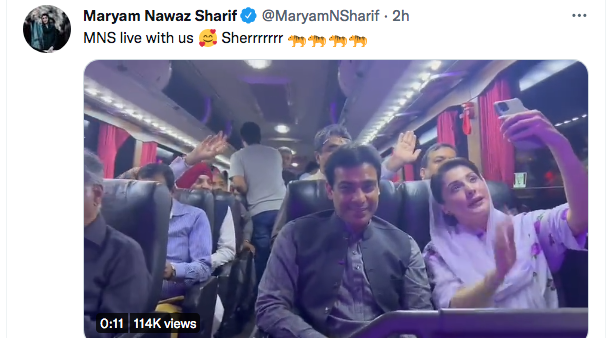 The development comes hours after the provincial assembly received two no-trust motions in a single day, one against Elahi by the joint opposition and the other by the PTI against its own Deputy Speaker Sardar Dost Muhammad Mazari.

However, the opposition’s motion was not accepted by the assembly secretariat. The PML-N’s no-confidence resolution against Elahi alleged that he violated assembly rules and influenced PA matters despite having no jurisdiction as he was currently contesting for Punjab chief.

“To stand with Hamza who clearly has the majority, I will be going to Punjab Assembly ijlaas at 7 Insha’Allah,” Maryam wrote on her official Twitter handle.