A member of the Queen’s Guard receives water to drink during the hot weather. (C) A firefighter tries to extinguish a wildfire in Spain; (R) People bathe in a sea, during a heatwave in London on Wednesday. AFP / Reuters

Spain’s Prime Minister Pedro Sanchez said “more than 500 people died” during a 10-day heatwave as Europe counts the cost of a record period of extreme temperatures.

Emergency services battled wildfires across swathes of southern Europe amid mass evacuations on Wednesday, as warnings sounded in London after Britain’s hottest day that the fight against climate change needed to be stepped up.

At least 13 people have died in Britain while swimming during a spell of record-breaking hot weather that sparked wildfires, damaged train tracks and triggered warnings that efforts to tackle climate change needed to be stepped up.

“Thirteen people lost their lives after “getting into difficulty in rivers, reservoirs and lakes while swimming in recent days — seven of them teenage boys,” British minister Kit Malthouse told parliament on Wednesday. 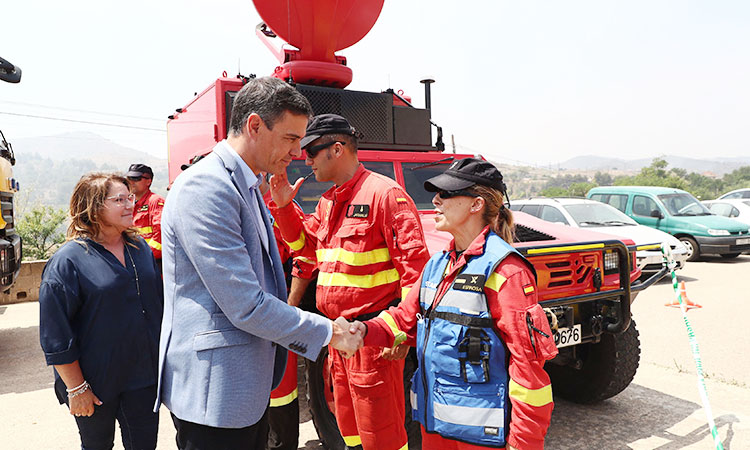 Pedro Sanchez greets firefighters during a visit of the areas affected by wildfires, in Ateca, near Zaragoza. AFP

At least 41 properties were destroyed in London and more than a dozen elsewhere in Britain, Malthouse said. 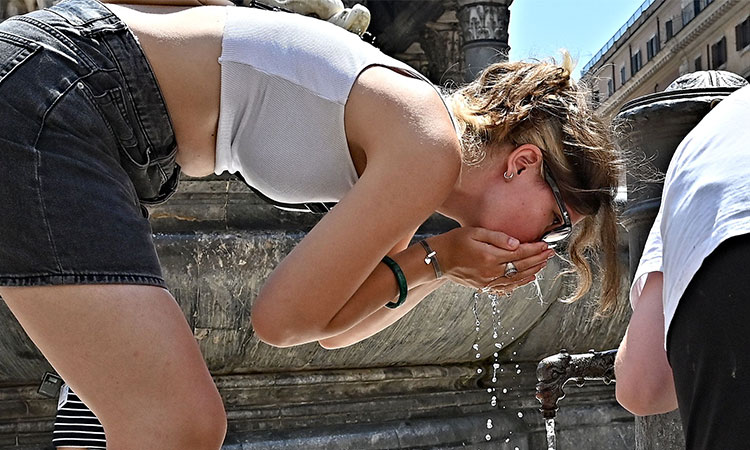 Tourists cool off and drink water from a fountain in front of the Pantheon in Rome. AFP

Climate change protesters said the scorching weather should be a wake-up call for the continent.

“This has nothing to do with ideologies, but with a reality, with a climatic emergency that the planet is living through,” said Sanchez. 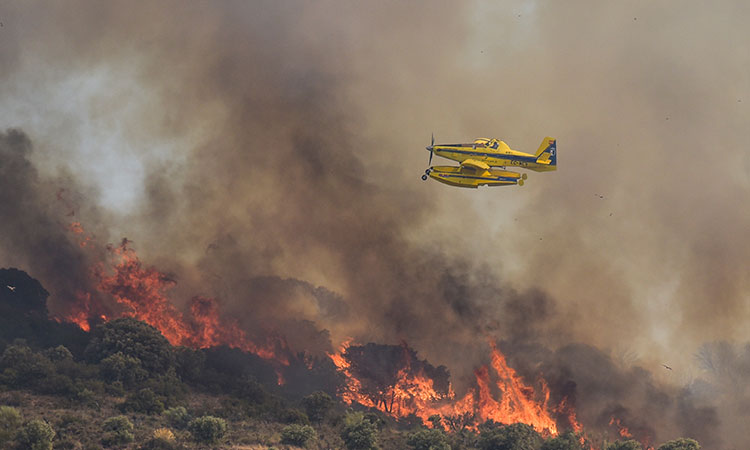 A firefighting plane flies over a forest fire in the Chiloeches area in the Guadalajara Province in Spain. AP

Meanwhile, Greek firefighters gained the upper hand in a battle against a wildfire raging for a second day in mountainside suburbs north of Athens that had forced hundreds of people to flee, an official said.

“For the most part the fire is in decline,” fire department spokesman Yiannis Artopios told reporters. 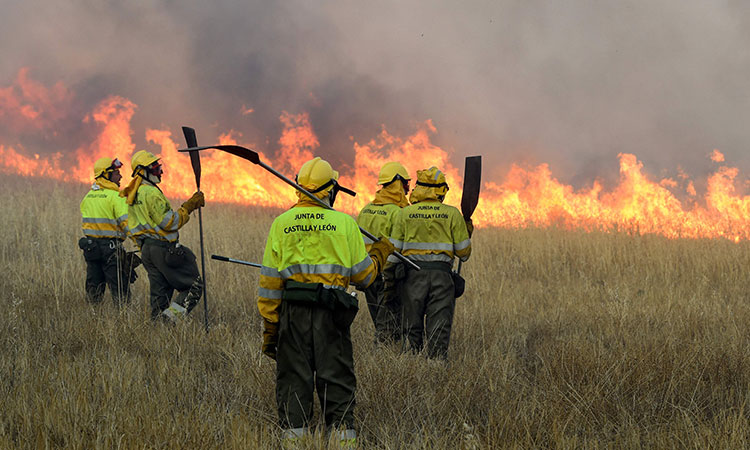 Firefighters stand guard as they look at fire in the village of Tabara, near Zamora, northwest Spain. AFP

“The fire was scorching our backs, we left in the nick of time. Had we stayed another 30 seconds it would have burned us,” a Pallini resident who lost his car and shed to the flames told ERT television. “The civil protection authority was late in alerting us,” he said.

In France, firefighters brought twin blazes near the southwestern city of Bordeaux under control. 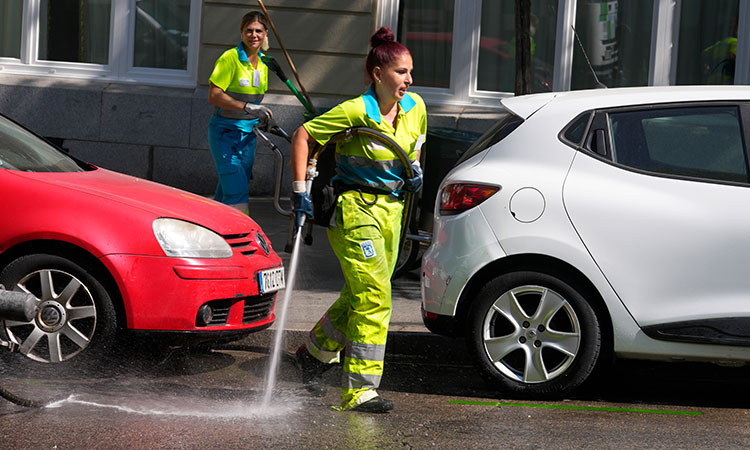 A worker sprays water in the street while a road sweeper walks behind her during hot weather in Madrid. AP

Temperatures of more than 40˚C over previous days have spelled misery for millions and shattered heat records.

Cooler air swept in on Wednesday, bringing relief to people from Portugal to Britain, but thousands of firefighters continued to tackle blazes that have broken out in multiple countries after months of drought-like conditions. 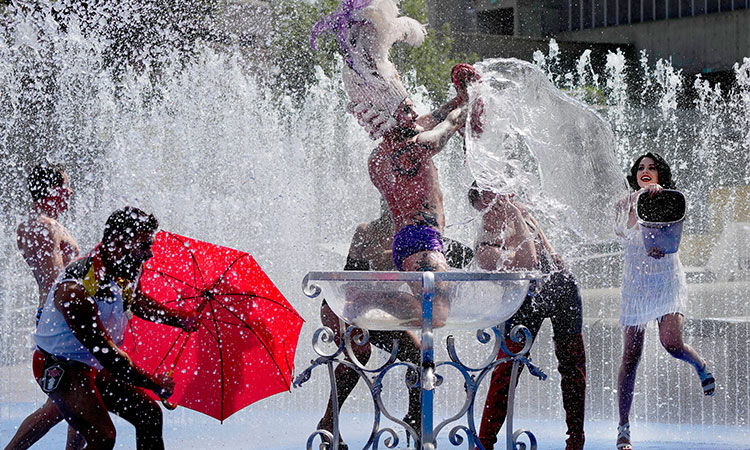 The heatwave saw a new all-time record for Britain where the national weather service clocked 40.3˚C in eastern England, surpassing the previous high set in 2019.

“Yesterday was the busiest day for the fire service in London since the Second World War,” the city’s mayor Sadiq Khan told Sky News on Wednesday, urging the public to remain vigilant despite temperatures now falling. 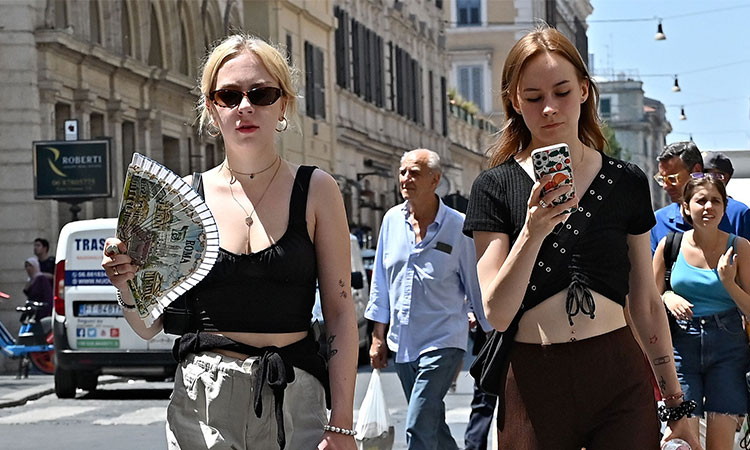 A girl refreshes herself with a fan, in central Rome. AFP

Hundreds of firefighters were also deployed in western Slovenia to battle a blaze that forced the evacuation of several villages, emergency services said.

Climate demonstrators triggered a lengthy tailback on Britain’s busiest motorway encircling London on Wednesday as they sought to highlight the need for greater action to reduce greenhouse gases responsible for global heating. 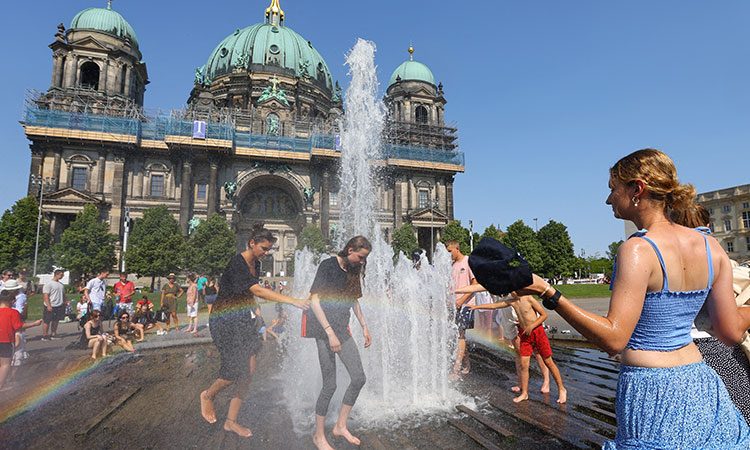 “This is the moment when climate inaction is truly revealed in all its murderous glory for everyone to see: as an elite-driven death project that will extinguish all life if we let it,” the activist group said in a statement.