‘I am so happy. I have received the visa. I will travel now and meet (my brother),’ Sika Khan said in a video message.

The Pakistan High Commission in India has issued a visa to an Indian senior citizen, allowing him to meet his brother and other family members in Pakistan, with whom he was separated 74 years ago due to Partition in 1947, Dawn reported.

“Pakistan High Commission issues visa to Sika Khan to visit his brother, Mohammed Siddique, and other family members in Pakistan,” the embassy announced on Twitter.

The two brothers, separated in 1947, were recently reunited after 74 years at the Kartarpur Sahib Corridor.

A video of the siblings meeting each other at the Kartarpur Corridor had gone viral on social media, making people on both sides of the border shed happy tears. 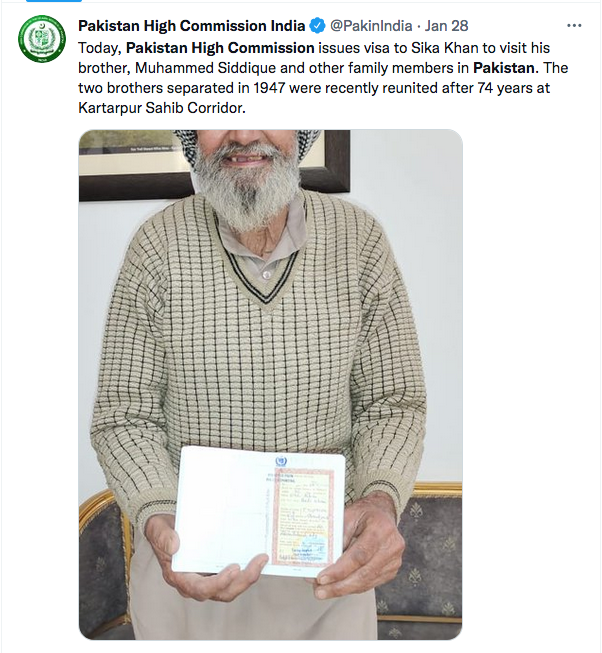 “The story of the two brothers is a powerful illustration of how the historic opening of the visa-free Kartarpur Sahib Corridor in November 2019 by Pakistan is bringing people closer to each other,” the Pakistan High Commission said.

Sika Khan also met Charge d’Affaires Aftab (CDA) Aftab Hasan Khan and interacted with Mission’s officers. He appreciated his interaction and thanked the CDA for the co-operation extended to him.

“I am so happy. I have received the visa. I will travel now and meet (my brother),” Sika Khan said in a video message recorded at the embassy.”

Sika Khan lost his brother Muhammed Siddique during the partition in 1947, when part of Punjab went to Pakistan. Sika Khan remained in India’s Punjab but his brother went to Faisalabad in Punjab province.

Dawn had earlier reported that Siddique, a resident of Phugaran village on the outskirts of Faisalabad district, said he had contacted a Sikh social worker from Canada two years ago. He said the social worker had helped reunite the two brothers. According to the report, Siddique is 80 while Khan is 78 years old.

According to Siddique, his brother and sister had gone to his grandparents’ house with his mother in 1947. “A civil war was raging on and my father and other family members decided to migrate immediately to save lives and we came to Pakistan,” he said.

In a separate development, the Indian government has refused to allow Pakistan International Airlines (PIA) to operate a special flight for Hindu pilgrims travelling between Karachi and Jaipur.

The PIA had sought permission from the Indian Civil Aviation Authority for authorisation to fly Hindu pilgrims from Karachi to Jaipur on Jan.29.

The special PIA flight was arranged on the request of the Pakistan Hindu Council (PHC) for visit to religious sites and the flight had to carry 160 pilgrims from Karachi to Lahore on Saturday morning and then to Jaipur.

“The flight had to land at Jaipur airport at 12:00 noon on Saturday,” they said and added that however, the PIA was not given permission to plan the flight.

Earlier, despite a complete standstill in trade and travel between India and Pakistan, a new proposal by the Pakistan Hindu Council to allow Hindu, Muslim and Sikh pilgrims to travel by air had been forwarded by the government in Islamabad.