Israel hit the Gaza Strip before dawn on Saturday in what it said was a retaliatory strike for rocket fire from the Palestinian territory controlled by Hamas.

The exchange of fire came hours after US President Joe Biden visited Israel and the occupied West Bank.

Wafa said Israeli missiles were fired at two locations, one “near a tourist resort” where nearby houses were severely damaged.

Balls of fire lit up the night sky over Gaza City after the strikes, which at one location left a hole in the earth beneath dislodged paving stones in front of a low-rise building. A man later swept up shattered glass in front of what appeared to be an office.

Before flying to Saudi Arabia on Friday, Biden visited West Bank where he reiterated his administration’s commitment to a two-state solution to end the Israeli-Palestinian conflict. 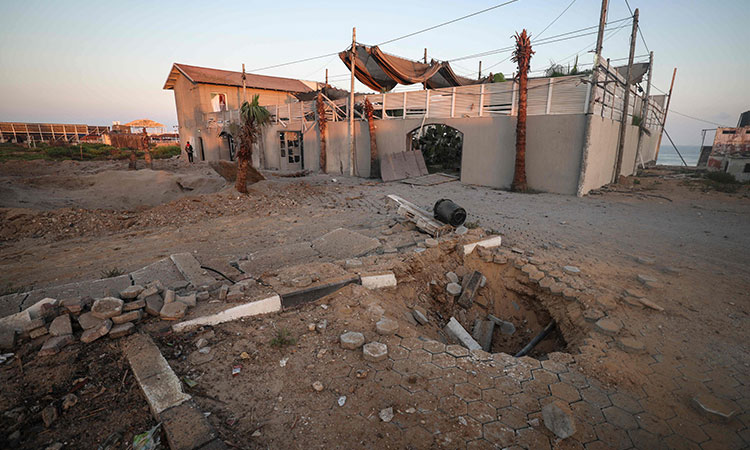 A general view of the aftermath of an Israeli air strike in Gaza City. AFP

There “must be a political horizon that the Palestinian people can actually see,” Biden said. “I know that the goal of the two states seems so far away,” he said in Bethlehem, alongside the Palestinian President Mahmoud Abbas.

President Abbas said “recognising the state of Palestine” is the key to peace. Biden announced an additional $200 million for the United Nations agency serving Palestinian refugees, which saw funding cut by the previous US president Donald Trump.

During a visit earlier on Friday to a hospital in east Jerusalem, Biden pledged a $100 million aid package for medical institutions in the area.

He also announced plans to roll out infrastructure for 4G Internet across the Gaza Strip and the West Bank by the end of next year, fulfilling a longstanding aspiration among Palestinians.