Ukrainian servicemen carry a wounded comrade as they are being evacuated from the besieged Azovstal steel plant in Mariupol on Monday. AP

Ukraine’s military said on Tuesday it was working to evacuate all remaining troops from their last stronghold in the besieged port of Mariupol, ceding control of the city to Russia after months of bombardment.

The evacuation of hundreds of fighters, many wounded, to Russian-held towns, likely marked the end of the longest and bloodiest battle of the Ukraine war and a significant defeat for Ukraine. Mariupol is now in ruins after a Russian siege that Ukraine says killed tens of thousands of people in the city.

With the rest of Mariupol firmly in Russian hands, hundreds of Ukrainian troops and civilians had holed up beneath the city’s Azovstal steelworks. Civilians inside were evacuated in recent weeks, and more than 260 troops, some of them wounded, left the plant for Russian-controlled areas late on Monday.

“The ‘Mariupol’ garrison has fulfilled its combat mission,” the General Staff of Ukraine’s Armed Forces said in a statement.

“The supreme military command ordered the commanders of the units stationed at Azovstal to save the lives of the personnel … Defenders of Mariupol are the heroes of our time,” it added.

Ukrainian Deputy Defence Minister Anna Malyar said 53 injured troops from the steelworks were taken to a hospital in the Russian-controlled town of Novoazovsk, some 32 km (20 miles) to the east, while another 211 people were taken to the town of Olenivka, in an area controlled by Russian-backed separatists.

All of the evacuees will be subject to a potential prisoner exchange with Russia, she added.

About 600 troops were believed to have been inside the steel plant. Ukraine’s military said efforts were under way to evacuate those still inside. 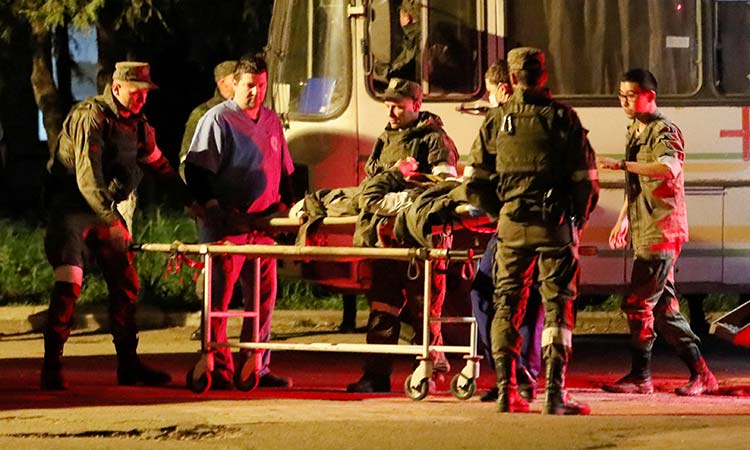 A wounded service member of Ukrainian forces is transported on a stretcher out of a bus in Novoazovsk. Reuters

“We hope that we will be able to save the lives of our guys,” Ukrainian President Volodymyr Zelensky said in an early morning address. “There are severely wounded ones among them. They’re receiving care. Ukraine needs Ukrainian heroes alive.”

Reuters saw five buses carrying troops from Azovstal arrive in Novoazovsk late on Monday. In one, marked with Z like many Russian military vehicles in Ukraine, men were stacked on stretchers on three levels. One man was wheeled out, his head tightly wrapped in thick bandages.

Moscow calls its nearly three-month-old invasion a “special military operation” to rid Ukraine of fascists, an assertion Kyiv and its Western allies say is a baseless pretext for an unprovoked war. 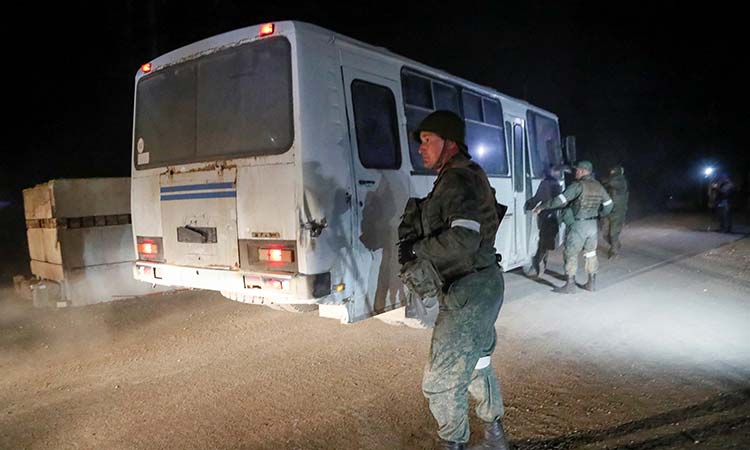 Russia’s invading forces have run into apparent setbacks, with troops forced out of the north and the environs of Kyiv in late March. A Ukrainian counterattack in recent days has driven Russian forces out of the area near Kharkiv, the biggest city in the east.

Ukraine’s general staff said Russian forces were reinforcing and preparing to renew their offensive near Slovyansk and Drobysheve, southeast of the strategic town of Izyum, having suffered losses elsewhere.

Areas around Kyiv and the western city of Lviv, near the Polish border, have continued to come under Russian attack. A series of explosions struck Lviv early on Tuesday, a Reuters witness said. There were no immediate reports of casualties or damage.

On Monday, Ukraine’s defence ministry said troops had advanced all the way to the Russian border, about 40 km north of Kharkiv. 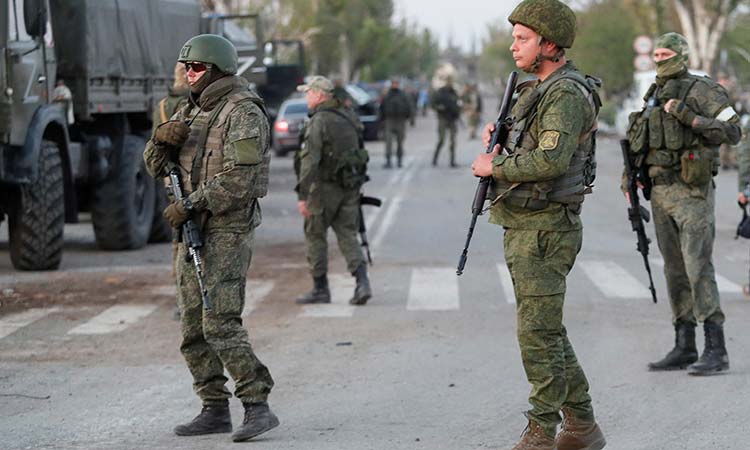 Service members of pro-Russian troops stand guard on a road before the expected evacuation in Mariupol. Reuters

The successes near Kharkiv could let Ukraine attack supply lines for Russia’s main offensive, grinding on further south in the Donbas region, where Moscow has been launching mass assaults for a month.

A village in Russia’s western province of Kursk bordering Ukraine came under Ukrainian fire on Tuesday, regional Governor Roman Starovoit said. Three houses and a school were hit but there were no injuries, he said.