A man with no flying experience landed an aircraft safely at a Florida airport after the pilot was down with medical emergency.

The passenger with no aviation experience took control and decided to land a Cessna 208, with the help of an air traffic controller.

According to the local media, the anonymous passenger was heading to his home, last Tuesday, to see his pregnant wife, on board the Cessna plane on a flight from the Bahamas to Florida, before starting the dramatic incident, which was described as a “miracle.”

“I’ve got a dangerous situation here,” the passenger was heard telling the air traffic controller in Fort Pierce, as he flew over the Florida coast.

The pilot fell consciousness, and I have no idea about flying.”

The air traffic controller replied, “I’ve got the message, where are you currently?”

The passenger answered, “No idea, I can see the Florida coast in front of me.”

The media revealed that the passenger remained incredibly calm, and managed to land the plane at the “Palm Beach” International Airport, with the help of the air traffic controller.

A spokesman for the Federal Aviation Administration “FAA” affirmed that the FAA conducted an investigating into the accident, noting that the pilot suffered from a possible medical problem but gave further details about his health. 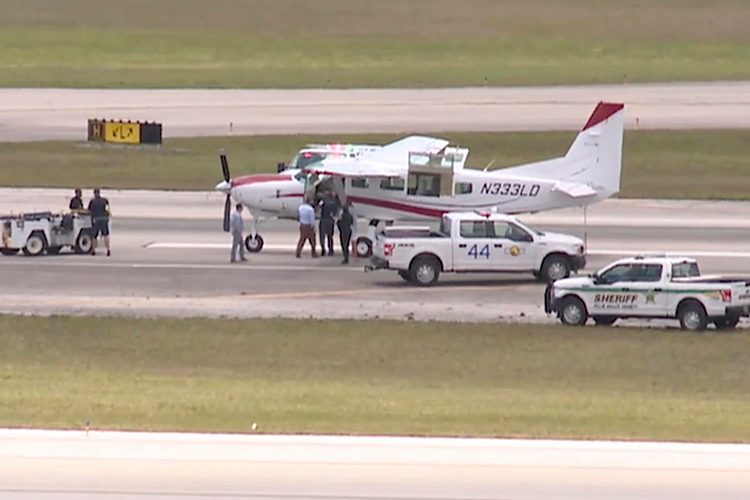 Air traffic controller Robert Morgan, a 20-year veteran, said his experience as a flight instructor helped him guide the passenger, whose name has not been released, as he landed the plane.
“He was very calm, he just said, ‘hey, I just don’t know how to fly, you know, I don’t know how to stop this thing if I do get it on the runway,” Morgan told CNN.

“I felt like I was gonna cry because I had so much adrenaline built up” after the incident, Morgan added, saying the passenger gave him a hug and thanked him for helping him get safely back to his pregnant wife.

The condition of the pilot or the nature of the medical emergency was not immediately released, but Palm Beach Fire Rescue said a patient was transported to a hospital after the plane touched down.