Emergency crews respond to a collapsed Amazon.com warehouse after a Tornado passed through Edwardsville, Illinois, on Saturday. Reuters

Tornadoes ripped through five US states overnight, leaving more than 83 people dead across six US states and causing multiple fatalities at an Amazon warehouse in Illinois that suffered “catastrophic damage” with around 100 people trapped inside.

The western Kentucky town of Mayfield was “ground zero” of the storm — a scene of “massive devastation,” one official said.

The Kentucky governor said he feared dozens more could be dead. Gov. Andy Beshear said about 110 people were in the factory in Mayfield, Kentucky, when the Tornado hit.

“We believe our death toll from this event will exceed 50 Kentuckians and probably end up 70 to 100,” he said at a news conference Saturday. “It’s very hard, really tough, and we’re praying for each and every one of those families.” 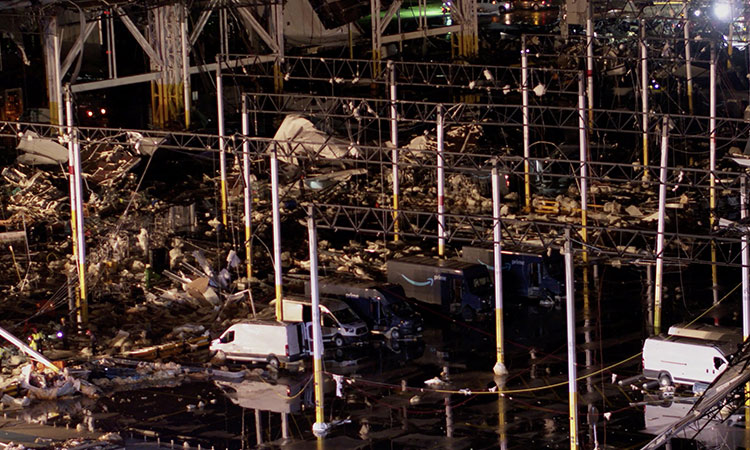 Debris lies around delivery vehicles at a collapsed Amazon.com warehouse in Illinois. Reuters

Pictures and videos shared on social media from the city of Mayfield in Kentucky showed buildings torn apart by the storm, with bent metal, trees and dislodged bricks scattered across the streets and only the remnants of houses left behind with Christmas two weeks away.

In Arkansas, one person was killed and 20 others trapped after a Tornado struck the Monette Manor nursing home, US media reported, with another person killed elsewhere in the state.

Craighead county official Marvin Day told local news channels that rescuers had successfully pulled out those trapped in the building and the structure was “pretty much destroyed.”

In Tennessee, at least two people were killed in storm-related incidents, an emergency management official told media. The Tornadoes tore through the four states — Missouri, Arkansas, Kentucky and Tennessee —with warnings in effect for Illinois. 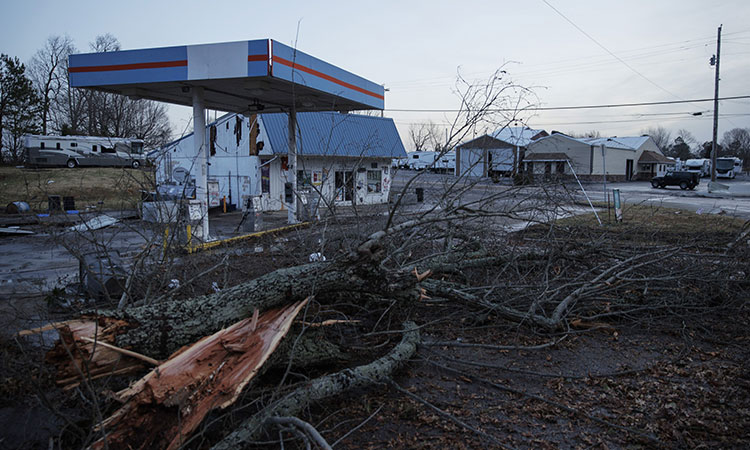 Scientists have warned that climate change is making storms more powerful and increasing their frequency, posing a growing threat to areas where extreme weather events are already common.

Images of the Tornadoes from US news channels showed a black cylinder sweeping across the ground, illuminated by intermittent blasts of lightning. 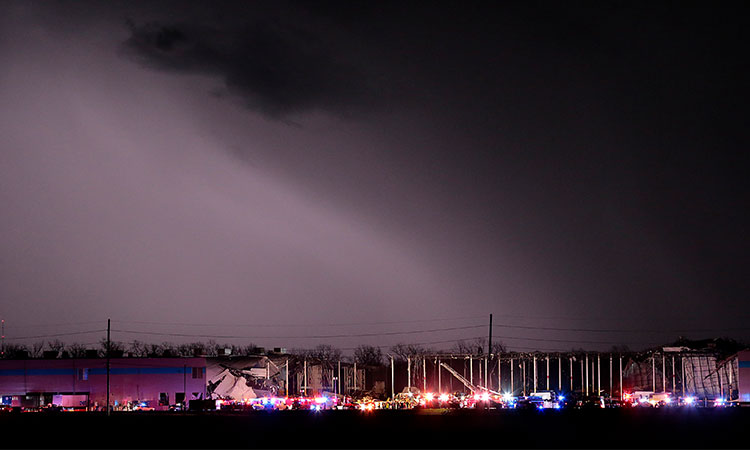 The Amazon distribution centre is partially collapsed after being hit by heavy winds in Edwardsville. AP

A number of counties in Kentucky were left devastated by at least four Tornadoes that touched down. One smashed through a swathe of 200 miles of the state, Governor Andy Beshear said.

“I fear that there are more than 50 dead … probably closer to somewhere between 70 and 100, it’s devastating,” Beshear said, adding that it was the “most severe Tornado event in Kentucky’s history.”

In one incident, the roof of a candle factory collapsed, resulting in “mass casualties” in the city of Mayfield, the governor added.

“Mayfield in Graves County will be ground zero,” Kentucky emergency management director Michael Dossett told CNN on Saturday morning.
“The city took the heart, the hardest hit. There is massive devastation in that city,” he said.

The governor declared a state of emergency before midnight and said scores of search and rescue officials had been deployed to save lives as power outages continued to hit the area.

On the same night a storm ripped through a massive Amazon warehouse in the state of Illinois where around 100 workers were trapped inside, local media reported.

Hundreds of officials were working through the early hours of Saturday to rescue employees at the Amazon warehouse — a third of which was reduced to rubble — who were on the night shift processing orders ahead of the Christmas holidays. 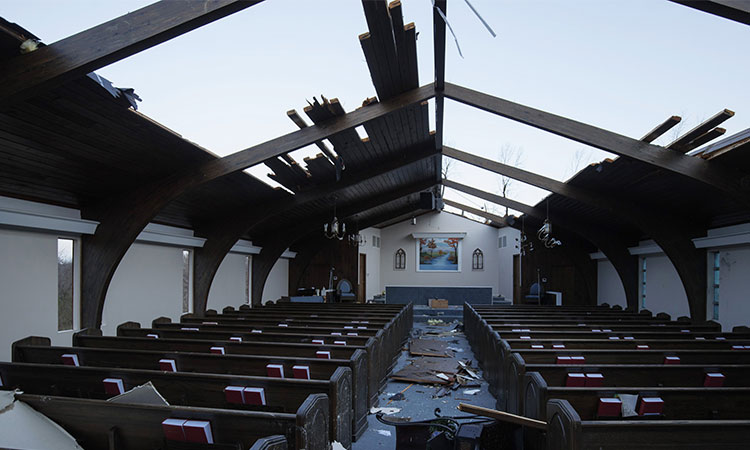 The Collinsville Emergency Management Agency described it as a “mass casualty incident” with “multiple subjects trapped at Amazon Warehouse.” A Tornado warning had been in effect in the area at the time.

Footage shared across US news channels and social media of the Amazon warehouse in the city of Edwardsville showed a large part of the facility’s roof ripped off, while one of the walls had collapsed into the building, with rubble strewn across the site.

Edwardsville police said in a statement there were “confirmed fatalities.” Illinois Governor J.B. Pritzker said: “My prayers are with the people of Edwardsville tonight.”

“Our Illinois State Police and Illinois Emergency Management Agency are both coordinating closely with local officials and I will continue to monitor the situation,” he added.

In a statement, Amazon spokesperson Richard Rocha said “the safety and well-being of our employees and partners is our top priority right now. We’re assessing the situation and will share additional information when it’s available.”

UAE signs MoU with Panama to enhance capabilities of seafarers