Bhagwant Mann and Gurpreet Kaur during their wedding ceremony at his official residence in Haryana on Thursday. Twitter photo

Punjab Chief Minister Bhagwant Mann on Thursday tied the knot with Gurpreet Kaur, a doctor from Haryana, in a low-key small private ceremony as per Sikh rituals at his official residence amidst the presence of Delhi Chief Minister and AAP national convener Arvind Kejriwal.

It is for the first time that a marriage ceremony was solemnised in the Chief Minister’s residence. Mann, 48, divorced his first wife Inderpreet Kaur in 2015.

He has two children from that marriage — daughter Seerat Kaur Mann (21) and son Dilshan Singh Mann (17), who attended Mann’s swearing-in ceremony on March 16.

The chief minister made a surprise wedding announcement a day earlier. It is believed to be an arranged marriage. 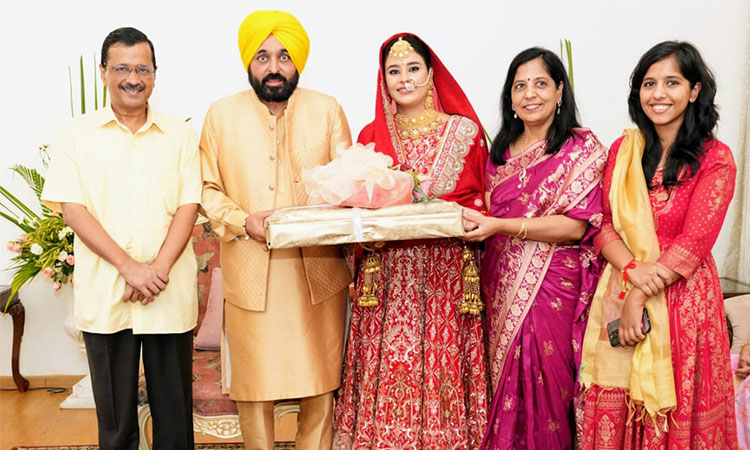 Donning golden attire and a yellow turban with traditional studded ‘kalgi’ atop, groom Mann arrived for the wedding under a Phulkari ‘dupatta’ with AAP Rajya Sabha member Raghav Chadha, Kejriwal and a select few AAP senior leaders walking beside him.

A ribbon-cutting ceremony was also performed with the bride’s women friends blocking the entrance of the marriage venue. 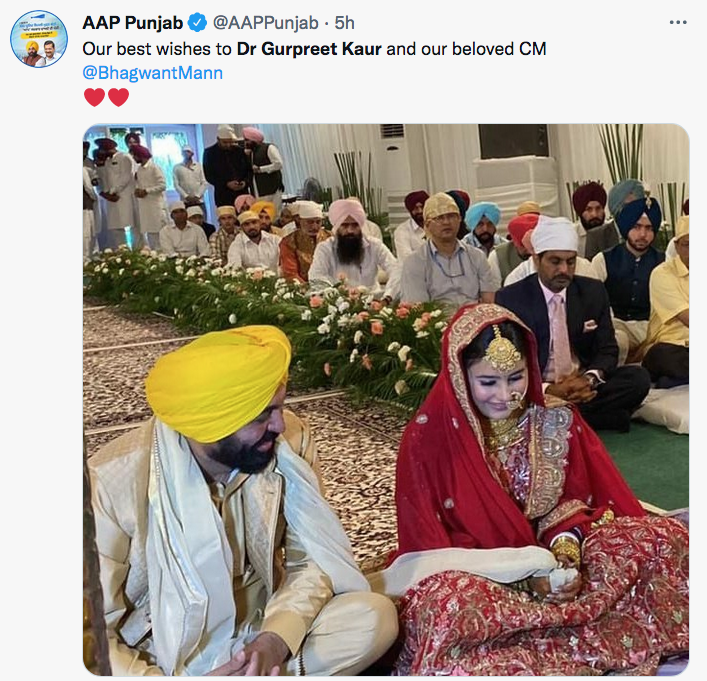 After the conclusion of Anand Karaj ceremony, the couple took blessings of those present at the wedding.

Bride Kaur, 32, an MBBS degree holder from Maharishi Markandeshwar University in Mullana in Ambala district, is the youngest of three sisters.

The elder ones are settled in the US and Australia.

“Din Shagna Da Chadyaa (the auspicious day has come (for her wedding),” Kaur tweeted and also posted her photo. Only close family members, including Mann’s mother, sister and a few relatives and friends attended the wedding. 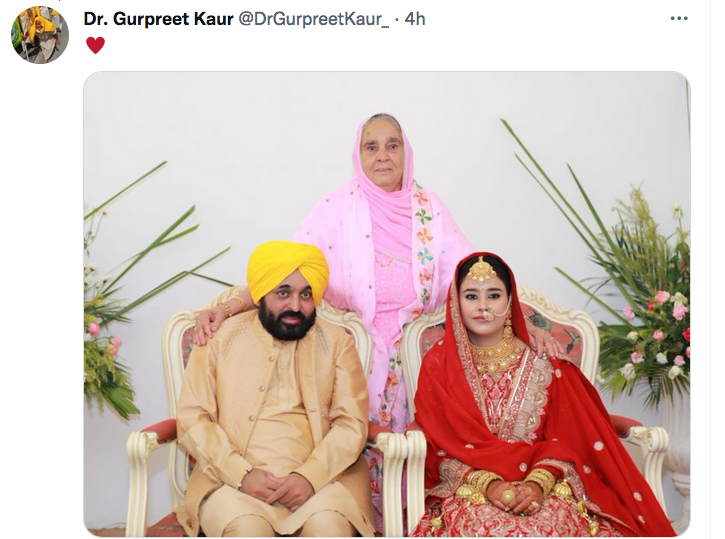 Speaking to the media before attending the wedding, Kejriwal said his younger brother Bhagwant Mann is getting married and embarking on a new journey.

“My younger brother is getting married and embarking on a new journey. My best wishes to him,” Kejriwal told the media at the Chandigarh airport.

An elated Chadha added, “My brother is getting married, I am extremely happy.”

He shared a picture on Twitter with Mann, who was seen in wedding golden attire donning a yellow turban.

Consul General of Canada in Chandigarh, Patrick Hebert, greeted the Chief Minister by tweeting, “Beautiful day for a wedding in #Chandigarh. Congratulations to Chief Minister @BhagwantMann and @DrGurpreetKaur_and best wishes for a happy life!”