A videograb shows people running on the roof of a subway train in New York City.

In a daredevil act, a group of people were caught on camera travelling on top of a subway train in New York City.

The police have launched an investigation into the incident.

The outrageous act was seen when the subway train crossed the Williamsburg Bridge in New York City.

The incident took place aboard a JT train as it headed toward Brooklyn’s Marcy Avenue station from the Lower East Side of Manhattan, according to local media.

The footage is akin to the video game “Subway Surfers” where one has to run on the tracks and roofs of subway train dodging moving obstacles and law enforcement officers.

In the video clip, young members were seen dancing and grooving as the train moved.

The fearless group was also spotted running on the roof of the train.

Several videos of the incident are circulating on social media platforms. 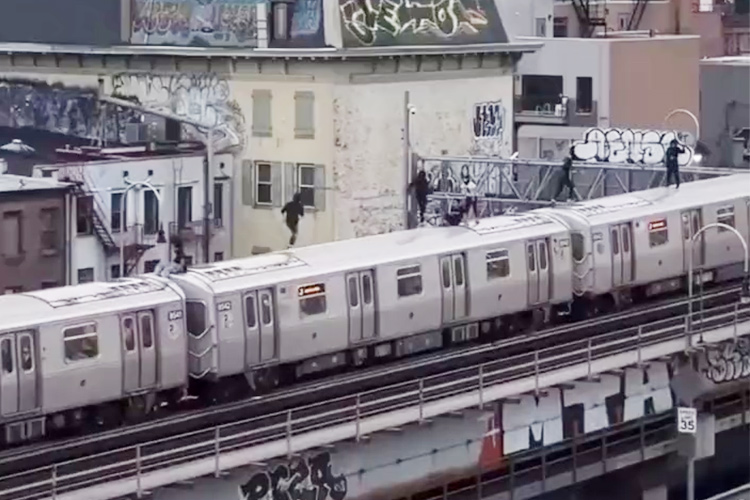 A closeup shows people dancing on the roof of a subway train.

The New York Police said they were aware of the video and said that there were eight people on the roof of the train.

The authorities said they could face charges of trespassing and reckless endangerment.

The police said that we don’t recommend anyone to ride on the roof of the subway.

It is not clear whether the passengers or the train faced any delay with the unruly incident.

It is noteworthy that subway cars can travel at high speeds and reach speeds up to 80 km per hour between stations. Travelling on top of the cars is a risky move.

The New York Police said that the city has seen an increase in crime rates over the past few weeks.

Recently, a man was caught on surveillance camera throwing an elderly woman onto a subway track in the Bronx.

The authorities said that they have identified the suspect as Theodore Ellis, 30, a native of Bronx.

The man is facing charges of assault.