In a story closer to fiction, a Saudi girl, after spending 21 years of her life among women, discovered that she is not a female, but rather a male, and the reason for this was a medical error that occurred during her birth that was only discovered late, according to Saudi media.

The person has been identified as Randa Shabeli, whose story began from the moment she was born in a government hospital in Riyadh, after doctors at the time noticed abnormalities in the genital area, so she was registered as female, according to what was published by the Saudi TV channel “Al-Ekhbariya”.

With this identity, Randa, who is currently requesting to change her name to Raed, lived for 21 years, as a female, before her life was turned upside down after learning that she had been the victim of a medical error, and that she was originally a young man and not a girl.

The late discovery came after Randa noticed that she did not develop any signs of female puberty like her peers, so she went to a hospital for a checkup.

The hospital made the shocking discovering and informed Randa that the male genitalia were inside the abdomen.

Randa told Saudi media, “In the beginning, it was a strange feeling, as if they were lying to me, because it was illogical to me, as if I had gone back to zero in my life.

“A new name, a new identity, no friends, no relatives.” 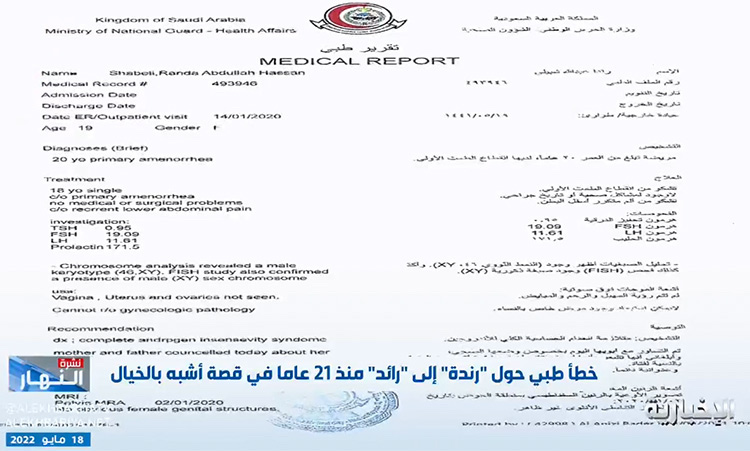 Randa pointed out that she is supposed to undergo surgery to take out the hidden genitals and another cosmetic surgeries, explaining that a doctor recommended her to travel to Britain to perform it, and submitted papers to do so, but concerned authorities rejected the papers.

The girl explained that she had filed a complaint against the hospital that caused the accident, but the outcome of the investigation has not yet been announced, despite the passage of months.

The father of the victim, Abdullah Shubaili, confirmed that since the beginning of the investigation, he has contacted the health affairs for more than 6 months, and so far they have not found the file, nor the doctors responsible for the delivery.

He added, “They say they travelled or died,” wondering, “Is it possible that the hospital does not keep the archive?”