Fishermen pose with the giant Moon fish in Jableh, Syria.

Four fishermen from the city of Jableh in Syria managed to catch a fish that they call the “giant moon fish,” or the “lunar fish,” a type of fish that lives in the oceans and deep seas.

The fisherman Muhammad Zamzam said, “When we went out to fish at dawn today, my brother Ahmed and Omar, and fisherman Abdullah Saad, sailed the boat in pursuit of our livelihood. We go after migratory fish such as sardines, according to the local media.

Zamzam added, “About an hour later, we felt a tremor in the boat as if it had hit a rock. It turned out that the moon fish had hit the boat, after it entered the net and was chasing small fish.”

He continued, “The fish tried a lot to escape from the net and collided again with the boat several times. We held our breath, as if it was a crazy adventure… we are in the middle of the sea in a finger-biting battle between us and the giant fish that weighs more than 1,000 kilogrammes.”

He added, “Because of its large weight, we could not lift it to the boat, so we pulled the net to the port and there we worked on tying the nets to the crane and pulling it out of the water.”

In turn, the head of the Jableh Fishermen’s Association, Khaled Muthbet, explained that the lunar fish lives in deep waters, and sometimes appears near the surface of the water when searching for food or by chasing swarms of small fish.

It was proven that the fish was offered in the auction market in the city of Jableh, where it was sold for 50,000 pounds, attributing the reason behind the low price to the lack of meat in it. 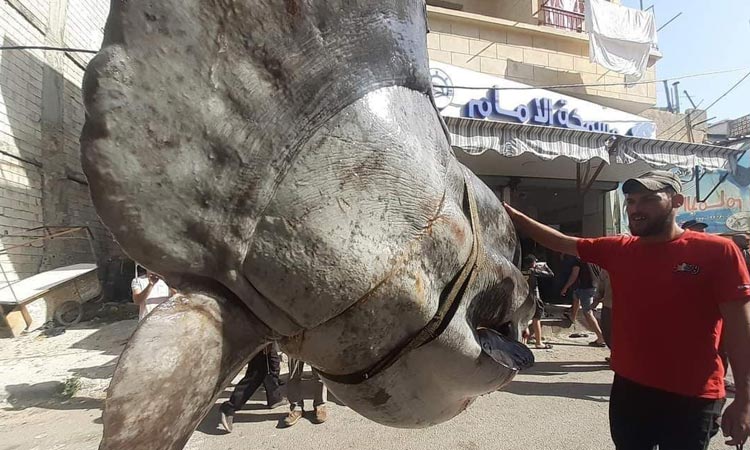 Muthbet pointed out that it is the second time that this type of fish has been caught in the governorate, indicating that last year a fish weighing 600 kilograms was caught by a fisherman in Jableh.

Scientifically, this fish is known as being large in size, taking a circular shape, and its body appears to be compact and deep. It is considered a very dangerous predator.

Moonfish is not eaten because it contains relatively high levels of mercury, but in general you can eat it once if found, as the danger of fish mercury appears only when you eat it more than once a week.

This fish is also considered a warm-blooded fish.

The moonfish feeds mainly on jellyfish and other marine invertebrates, and it is one of the most productive fish as a single female can lay up to 300 million eggs.