Pallbearers carry the coffin one of the victims of the Robb Elementary School mass shooting in Uvalde. Reuters

The grief-wrenched Texas town of Uvalde on Tuesday began burying its dead from the bloodiest US school shooting in a decade, with funerals for a pair of slain 10-year-old girls who were among the 19 students and two teachers killed one week ago.

Separate memorial services, both closed to the media, were held hours apart for Amerie Jo Garza, remembered for her love of swimming and art, and her classmate Maite Yuleana Rodriguez, an honor student who dreamed of becoming a marine biologist.

So insistent was Amerie’s family on privacy that authorities parked a fire truck outside of Sacred Heart Catholic Church to obscure camera shots after the hearse arrived. The girl’s casket was carried inside by six pall bearers in white shirts.

She was buried a short time later during a private graveside ceremony at a nearby cemetery. Services for Maite were held the same evening at a Uvalde funeral home. 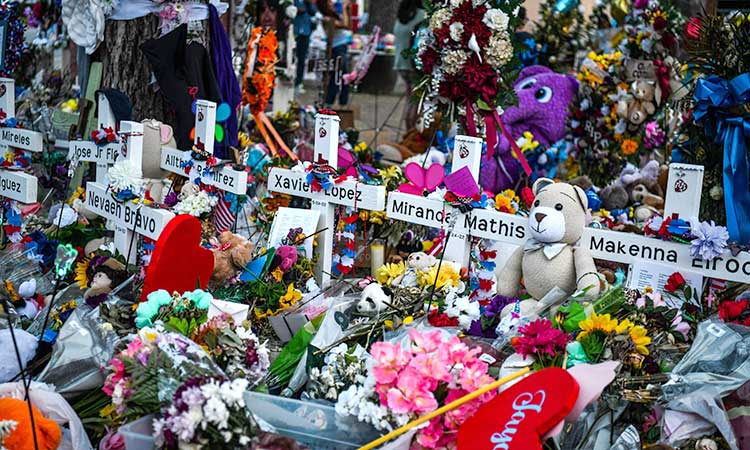 Crosses adorn a makeshift memorial for the victims of the shooting at Robb Elementary School in Uvalde. AFP

The two girls were among 19 students, aged 9 to 11, who were shot to death last Tuesday along with two teachers by an 18-year-old gunman who burst into their fourth-grade classroom at Robb Elementary School and opened fire with an AR-15-style semiautomatic rifle.

Several large media outlets in Texas, including the Dallas Morning News and the Texas Tribune, observed 21 minutes of silence on Tuesday – one minute for each of those who died in the attack.

Funerals for the remaining victims are planned over the next two weeks in Uvalde, a town of 16,000 predominantly Latino and Roman Catholic residents, 80 miles (130 km) west of San Antonio.

One service on Wednesday will be a joint memorial for Irma Garcia, 48, one of the two teachers killed, and her husband, Jose Garcia, 50, who died of a heart attack two days after the shooting. The couple, who were high school sweethearts, are survived by four children. 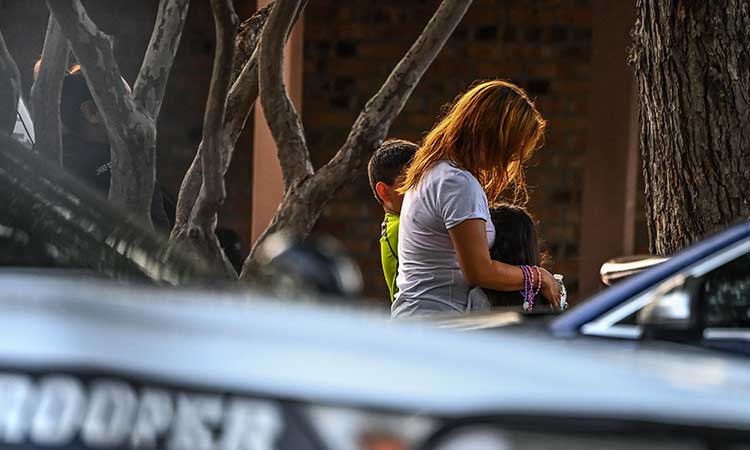 A woman holds her daughter during the funeral Mass for Mate Rodriguez in Uvalde, Texas, on Tuesday. AFP

The laying to rest of those who perished in the attack one week ago began as Texas Governor Greg Abbott issued a formal disaster declaration he said was designed to “accelerate all available state and local resources to assist the Uvalde community.”

With the first funerals came cancellation of a city council meeting on Tuesday, a session whose agenda was to have included the swearing in of its newly elected member, Pete Arredondo, who is also chief of the Uvalde Consolidated Independent School District police force.

Arredondo has come under heavy criticism for his role as on-scene commander of local law enforcement’s handling of the shooting as it unfolded. According to Texas Department of Public Safety (DPS) officials, it was Arredondo who decided against immediately storming the classroom where the shooter opened fire.

As many as 19 officers waited outside the classroom for nearly an hour as frantic school children cowering inside repeatedly called 911-emergency pleading for help, authorities said last week. A US Border Patrol-led tactical team ultimately burst in and killed the gunman. 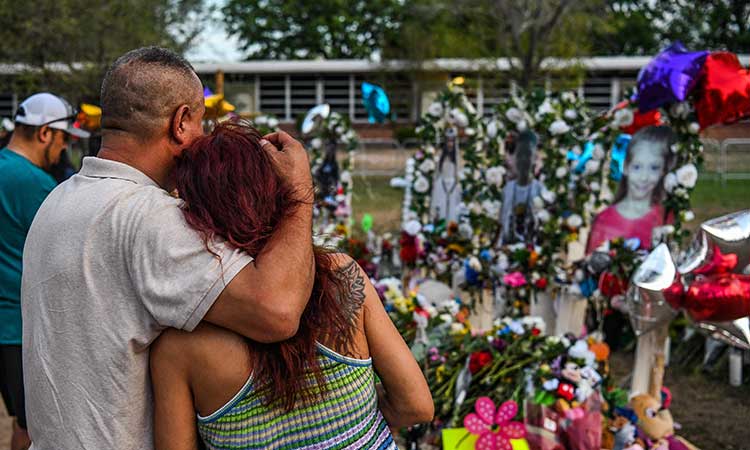 People pay tribute at a makeshift memorial for the victims of the Robb Elementary School shooting. AFP

A DPS spokesperson, Travis Considine, told Reuters by text message on Tuesday that the Uvalde city police and school district police departments were still cooperating with state-level investigators. But Considine said the school district’s police chief “has yet to respond to a request for a follow up interview made a couple of days ago.”

Arredondo, nevertheless, was sworn in to the council, according to a statement from Uvalde’s mayor that oaths of office were administered without ceremony during the day.

Separately, Considine said investigators had determined that the rear school door through which the gunman entered had been closed by a teacher before the shooter arrived but had failed to lock behind her – contrary to a DPS account last week that a teacher had left the door propped open.

“The investigation continues into why (the door) did not lock,” Considine added.

The shooting, the deadliest at a US school since 26 people were slain at Sandy Hook Elementary School in Connecticut, came 10 days after 10 people were killed by an 18-year-old gunman at a supermarket in Buffalo, New York. The back-to-back massacres have reignited a national debate over federal and state gun laws. 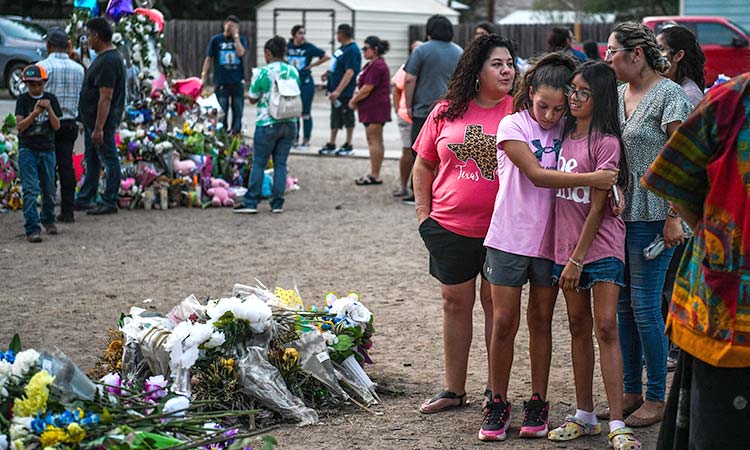 People mourn at a makeshift memorial for the victims of the Robb Elementary School shooting in Uvalde. AFP

Texas law allowed the Uvalde shooter to purchase an AR-15-type weapon on his 18th birthday, a week before the massacre. He also bought hundreds of rounds of ammunition and a second rifle in subsequent days.

US President Joe Biden, who traveled to Uvalde on Sunday, has joined many fellow Democrats in calling for new gun restrictions, such as a ban on assault-style weapons and universal background checks for all firearms purchases.

In New York, Democratic political leaders said on Tuesday 10 bills to tighten gun laws had been introduced in the state legislature, including one to raise the minimum age for buying semiautomatic rifles to 21.

Republicans have successfully held off tougher firearms control and in many states have relaxed gun regulations in recent years, saying law-abiding citizens have a constitutional right to bear arms.

Republican Arkansas Governor Asa Hutchinson, widely seen as potential 2024 candidate for president, made headlines by saying on CNN he was open to discussing raising the minimum age to purchase a semiautomatic rifle from 18 to 21.