A conceptual aircraft designed by a Yemini engineer, science communicator and video producer Hashem Al-Ghaili has set the stage for a debate on the future of luxury flights.

Ghaili designed and visualises the nuclear-powered sky hotel that can house over 5,000 guests including crew and stay airborne for years.

The graphic artist uploaded a video of a flying cruise ship called “Sky Cruise hotel” on YouTube, which depicts a giant plane that looks more like a giant cruise ship or a space station floating above the clouds.

According to Ghaili, the “flying hotel” operates without a pilot and without the need to refuel, and gives travellers the opportunity to see the aurora borealis closely every night.

The bold idea divided the internet’s pioneers.
Al Ghaili describes its “elegant design” as combining the “features of a commercial airliner and luxury.” 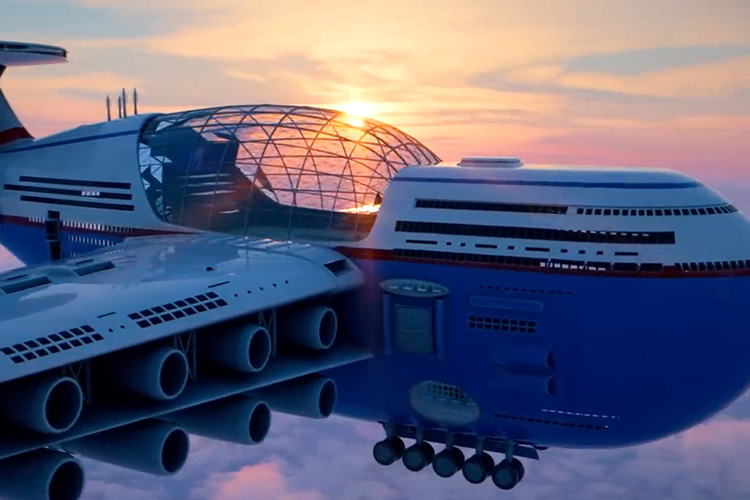 The aircraft can accommodate 5,000 guests.

He said that the “hotel” includes a huge “main entertainment platform” that includes shopping centers, gyms, swimming pools, restaurants, cinemas and even a theater, and also includes a conference center in a separate wing.

The “hotel” operates on nuclear energy through an on-board fusion reactor so it will never need to land for refuelling.

Passengers and crew can be brought on a separate plane to the “flying hotel”, which appears to have no fewer than twenty jet engines.

Al-Ghaili said that the plane represents the “future of transportation” and will fly 24 hours a day.

But since it never lands, where people will be taken to it is still somewhat unclear. 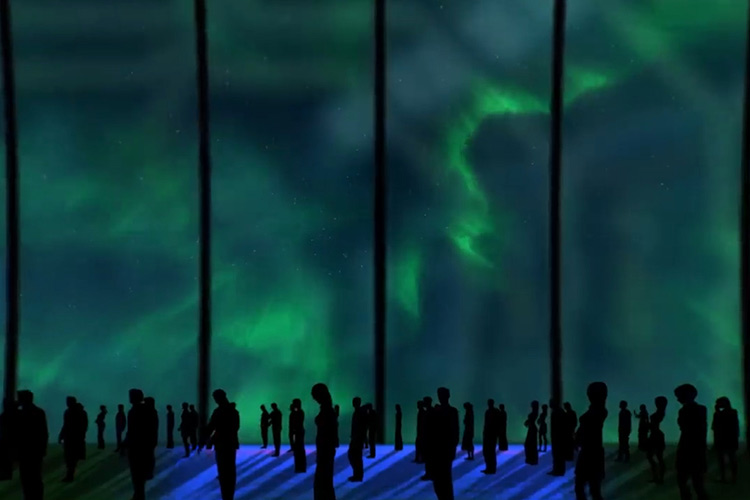 Guests can see the aurora borealis closely every night.

The number of crew members on board is also unknown.

In response to a comment on Facebook asking how many pilots to fly the plane, the designer simply said, “All this technology and you still want pilots?” He added, “I think it will be completely autonomous.”

Social media users were quick to react to the concept.
J. Tompkins said, “If physics and aerodynamics didn’t exist, then this vessel might actually be able to take off…”

Markius Fox said, “Thanks to nuclear energy, the hotel never runs out of fuel and can remain suspended in the air for several years without ever touching the ground.” The passengers and crew on the other hand must fight to survive in the evolving aero-thunderdome.”

Spaceman Rick said Youtube, “And I bring to you, the one-billion-dollar tire. Imagine the factory needed just to make one tire.
One tire would need a series of massive compressors running for 36 hours pumping an unheard of amount of nitrogen just to pressurise one tire.”

John Gerity said, “Hilarious! It’s like someone got in a time machine, traveled to 2070, found a retrofuturism video based on our era (as opposed to the 1950s or 1800s) depicting what people from our era thought our future would look like.

Tarquela said, “It’s interesting as a concept, although unfeasible.  Still, a good exercise in creativity.  Perhaps a mega airship, powered by a small atomic reactor, is more viable.  It would be a kind of floating citadel.”