Imran Khan along with other lawmakers, gestures upon his arrival to address the supporters of his party during a rally in Islamabad on Sunday. AFP

Pakistan’s Prime Minister Imran Khan said on Sunday that foreign powers were involved in the conspiracy to send his government packing through a no-confidence motion tabled by the opposition parties.

“Mostly inadvertently, but some people are using [foreign] money against us. We know from what places attempts are being to pressure us. We have been threatened in writing but we will not compromise on national interest,” he said while addressing a public meeting at the Parade Ground in Islamabad.

Imran said he has the letter [containing the threat] in his pocket and he can show it to anybody who wants to have a look at it but “off the record.” 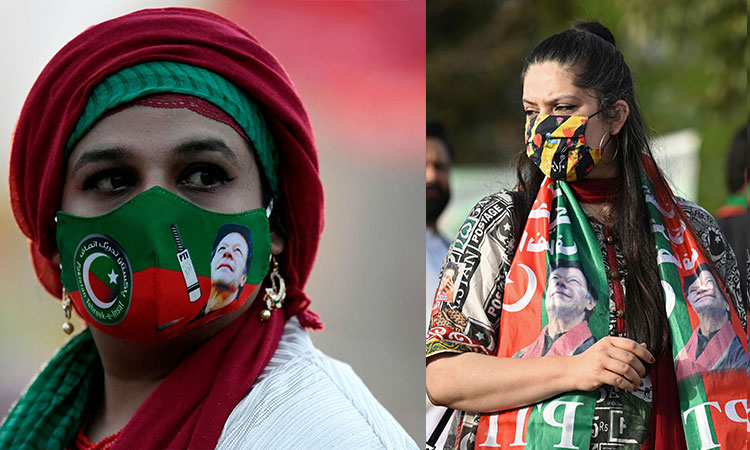 Terming the letter as ‘evidence’ of his claims, he said foreign elements are using local politicians and using money to “mend the country’s foreign policy.”

“I rarely write my speeches but I wrote this part of the address so that I don’t get emotional and say anything which can affect our foreign policy,” said the premier while claiming that foreign elements were involved in changing regimes in Pakistan.

He said he will not spare ‘corrupt leaders’ even if he had to step down from his post.

“First of all, I express heartfelt gratitude to my nation for coming from all parts of the country on my appeal,” he said in his opening remarks.

He also appreciated his party lawmakers present at the rally for refusing “opposition’s attempts to buy them off. I came into politics 25 years ago and formed a political party for one thing only and that is following the vision of Pakistan for which it was created.”

The prime minister once again claimed that he had put the country on the path of becoming a “Madina-like” welfare state. 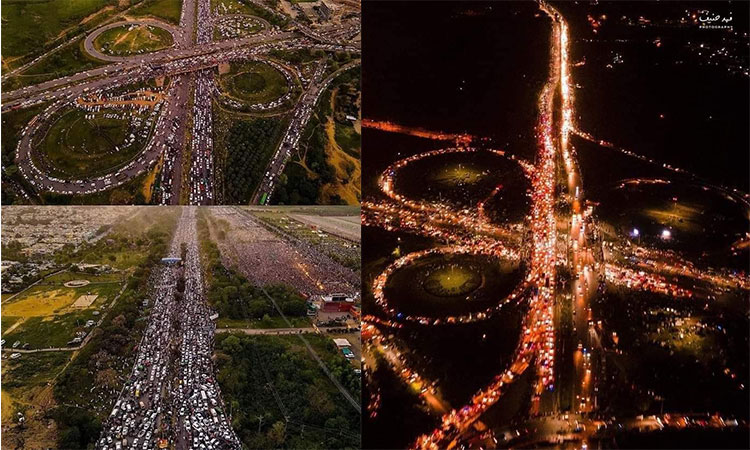 Supporters of PTI arrive to attend a rally next to a billboard with a picture of Imran Khan in Islamabad. AFP

“Previously, it was not possible for a common man to get free treatment at private hospitals… for the first time in the country’s history attempts are being made to lift the downtrodden segment of the society,” said the premier while referring to his government’s social welfare programmes.

Continuing his diatribe against the opposition leaders, Khan said, “‘three stooges’ wanted to topple my government to get NRO [amnesty] and doge accountability.”

He vowed that come what may he will not spare the “corrupt leaders,” saying that he was even ready to put his government at stake for this purpose.

“These ‘three stooges’ are looting the country for years and all this drama is being done to have Imran Khan surrender like Musharraf. They are trying to blackmail the government. General Musharraf tried to save his government and gave these thieves NRO and it resulted in the destruction of Pakistan. Come what may, I will not forgive them even if my government goes or even if I lose my life.”

The prime minister linked his crusade against corruption with the teachings of the Holy Prophet (PBUH).

“Our Prophet (PBUH) had also emphasised the supremacy of law. I don’t give them NRO because my Prophet had explained that nations get destroyed when you punish the poor and exempt the rich. Poor countries are backward because the law there fails to catch the rich who are involved in white collar crimes. They transfer stolen and looted money to offshore accounts. Small thieves do not destroy a country like the way big thieves do,” Imran said. 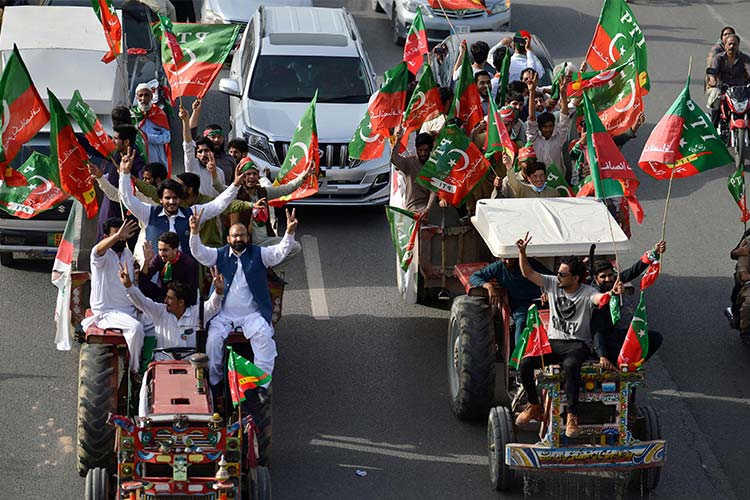 Activists and supporters of ruling party arrive to attend a rally in Islamabad.  AFP

“No government in the past has performed like my administration has done in the last 3.5 years,” the premier claimed once again.

“When the entire world was shut down due to coronavirus lockdowns’ I did not impose the blanket lockdown. I was criticised for destroying the country,” he remarked.

“Today I stand proud that the entire world is acknowledging that we protected the economy as well as people from the pandemic.”

He also cited a World Bank report, saying that Pakistan has the lowest unemployment rate in South Asia due to his government’s “prudent policies.”

Imran said all sectors of the country including exports, agriculture and others witnessed boom during his tenure, adding that after a gap of 50 years nine mega dams are being constructed in the country.

While citing various examples, he said people should know that the country benefits when honest rulers run it instead of corrupt leaders. 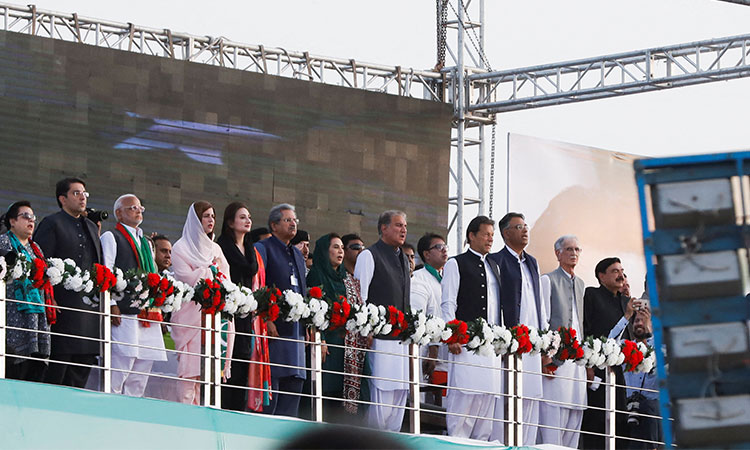 Imran Khan along with party leaders attend a public rally in Islamabad. AFP

“International court imposed a fine of Rs2,000 billion a few years ago in the Reko Diq case; my best team negotiated with them [private mining firm] and now they are investing $9 billion in Pakistan,” the premier said, adding that the people of Balochistan will benefit the most from the investment.

“Our currency will appreciate; Pakistan will have the largest gold reserves in the world.”

The prime minister said in the rental power project case a Rs200 billion penalty was imposed on Pakistan. “I spoke to [Turkish president] Tayyip Erdogan and they waived off the penalty,” he added.

Moreover, he claimed Minister for Communication Murad Saeed saved millions of rupees in the construction of main motorways and highways.