During the meeting, held at Al Shati Palace, Sheikh Mohamed Bin Zayed and Dr Ghebreyesus discussed ways to enhance cooperation between the UAE and WHO, in a way that will contribute to achieving their shared goals and serving targeted communities.

The WHO Director-General briefed Sheikh Mohamed on the organisation’s efforts and its regional and international activities aimed to eliminate communicable diseases. He also updated him on the steps to combat the spread of COVID-19, in collaboration with the international community.

Dr Ghebreyesus praised the support of Sheikh Mohamed and his health and humanitarian initiatives, including the Emirates Polio Campaign, the “Reaching the Last Mile Fund” to “End River Blindness” and efforts to eradicate guinea worm disease, all directed to boosting WHO’s programmes to combat and eliminate diseases, especially in the poorest communities. 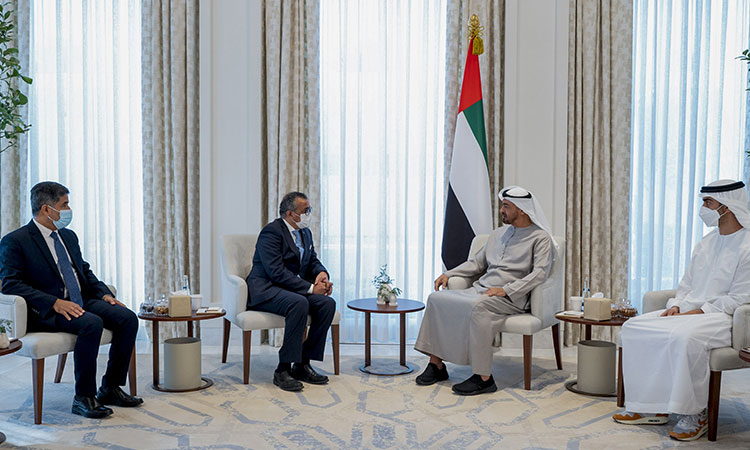 “His Highness Sheikh Mohamed Bin Zayed’s keen interest in eliminating communicable diseases and his cooperation with the international organisation have led to key successes in fighting diseases in Africa,” Dr Ghebreyesus said.

“The UAE is a key supporter of WHO’s programmes and initiatives to eliminate epidemics and communicable diseases,” he added.

The WHO Director-General commended the UAE’s solidarity with other countries since the outbreak of the COVID-19 pandemic and its assistance to the medical staff and frontline workers in many countries. He also highlighted the country’s initiatives to spread awareness and to combat chronic and communicable diseases in various parts of the world and their positive impact on the living conditions there.

He lauded the resilience demonstrated by the UAE in the face of COVID-19, which made it the best country in the world in handling the pandemic.

Sheikh Mohamed expressed UAE’s keenness to support the WHO’s efforts, eliminate the pandemic and mitigate its health and humanitarian impacts, and back the international efforts to eradicate diseases and pandemics. He further said that such keenness emanates from the UAE’s principles and values of cooperation, solidarity and extensively extending a helping hand to needy nations in crises.

He said the UAE’s efficient management of the COVID-19 crisis led to the pandemic’s containment and return to normalcy. It launched the National Immunisation Programme, provided vaccines to all citizens and residents, implemented a proactive package of precautionary and preventive measures, and ensured that the safety and security of the community top the country’s priorities.

In October, the UAE Pakistan Assistance Programme (UAE PAP) — part of Sheikh Mohamed Bin Zayed Al Nahyan’s initiatives to eliminate polio- announced that the UAE Polio Vaccination Campaign administered from 2014 to the end of September 2021, 583,240,876 doses of vaccination against polio for more than 102 million Pakistani children.

Emanating from Sheikh Mohamed Bin Zayed Al Nahyan’s vision and commitment to ending preventable diseases that affect the world’s poorest and most vulnerable communities, the ‘Reaching the Last Mile’ campaign, seeks to overcome some of the world’s most deadly and debilitating diseases.

A notable milestone of the initiative was the recent announcement by Niger that it had completed the necessary evaluations to certify the elimination of river blindness.