A house that was pulled into Rock Creek in Red Lodge, Montana, by raging floodwaters is seen on Tuesday. AP

More than 10,000 visitors were ordered out of Yellowstone as unprecedented flooding tore through the northern half of the nation’s oldest national park, washing out bridges and roads and sweeping an employee bunkhouse miles downstream, officials said Tuesday. Remarkably, no one was reported injured or killed.

The only visitors left in the massive park straddling three states were a dozen campers still making their way out of the backcountry.

Yellowstone National Park, which celebrates its 150th anniversary this year, could remain closed as long as a week, and northern entrances may not reopen this summer, Superintendent Cam Sholly said.

“The water is still raging,” said Sholly, who noted that some weather forecasts include the possibility of additional flooding this weekend. 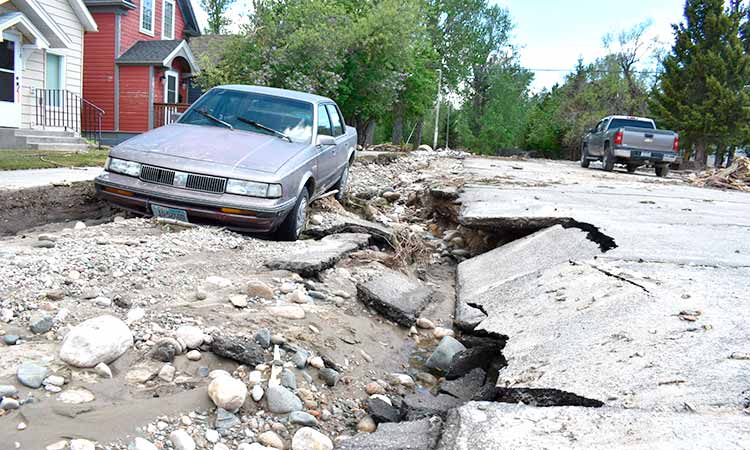 Flood damage is seen along a street in Red Lodge, Montana, on Tuesday. AP

The Yellowstone River hit historic levels after days of rain and rapid snowmelt and wrought havoc across parts of southern Montana and northern Wyoming, where it washed away cabins, swamped small towns and knocked out power. It hit the park just as a summer tourist season that draws millions of visitors was ramping up.

Instead of marveling at massive elk and bison, burbling thermal pools and the reliable blast of Old Faithful’s geyser, tourists found themselves witnessing nature at its most unpredictable as the Yellowstone River river crested in a chocolate brown torrent that washed away everything in its path.

“It is just the scariest river ever,” Kate Gomez of Santa Fe, New Mexico, said Tuesday. “Anything that falls into that river is gone.”

Waters were only starting to recede Tuesday, and the full extent of the destruction may not be known for a while. It was not expected to have affected wildlife. 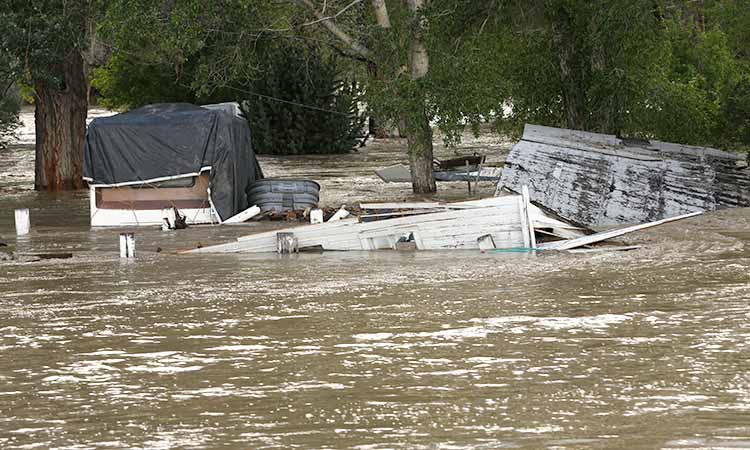 Closure of the northern part of the park will keep visitors from features that include Tower Fall, Mammoth Hot Springs and the Lamar Valley, which is known for viewing wildlife such as bears and wolves. Old Faithful, Yellowstone Lake and viewing the Grand Canyon of the Yellowstone are on the park’s southern loop road and likely to be reopened.

Sholly said the backpackers who remained in the park had been contacted. Crews were prepared to evacuate them by helicopter, but that hasn’t been needed yet, he said.

Sholly said he didn’t believe the park had ever shut down from flooding.

Gomez and her husband were among hundreds of tourists stuck in Gardiner, Montana, a town of about 800 residents at the park’s north entrance. The town was cut off for more than a day until Tuesday afternoon, when crews reopened part of a washed away two-lane road.