Shehroze Kashif (L) and Fazal Ali (R) with a military officer after the rescue operation in Gilgit on Thursday. Twitter photo

The military airlifted two Pakistani climbers, including the man who became the youngest to scale one of the world’s highest mountains, to safety on Thursday, two days after the pair went missing during an expedition to another dangerous peak.

The two — Shehroze Kashif, who last year scaled K2 at age 19, and Fazal Ali — went missing on Tuesday after scaling Nanga Parbat, known as “Killer Mountain” because of its dangerous conditions.

The military launched a search for them, following a plea from Kashif’s family. On Thursday, an army statement said the climbers were found stranded on Nanga Parbat and were taken to Gilgit, a town in the northwest.

A photo posted on Twitter by Kashif’s family later shows the smiling climbers sitting in an army helicopter. 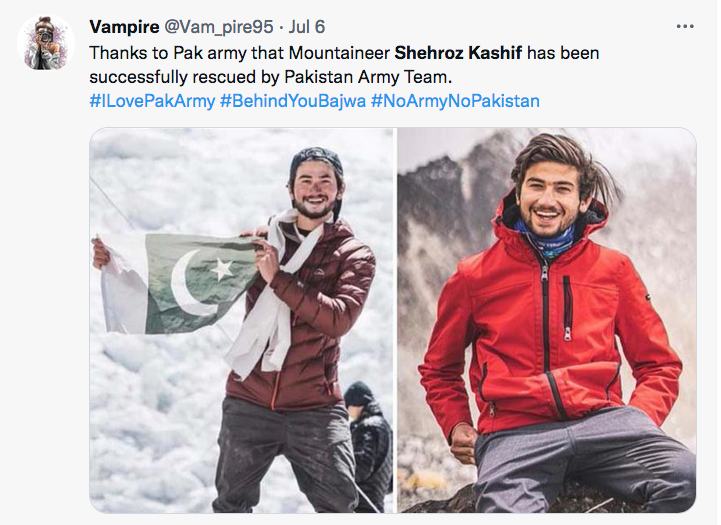 Earlier, Karrar Haidri, the secretary of the Alpine Club of Pakistan, told The Associated Press that both climbers were spotted on Wednesday and were “descending on their own” as bad weather hampered the military’s rescue mission.

In a statement Thursday, Kashif’s father confirmed that his son and fellow climber were safe and thanked army officials. Kashif Salman told the AP that the military told him the pair were successfully rescued.

“I have good news,” he said earlier on Thursday. “My son and Fazal Ali today safely reached a place on Nanga Parbat from where now they can be air-lifted.” He said authorities had asked the climbers to wait for the helicopters to reach there.

Every year, hundreds of local and foreign climbers try to scale K2, Nanga Parbat and the world’s other highest mountains located in the north. Kashif in 2021 also scaled Mount Everest, which is 237 metres taller than K2.

Last year, Kashif told the AP that nothing is impossible if we strive to get something. “My message to the world is challenge your limit, cross it and get what you desire,” he said.