As fight fans worldwide now know, Abu Dhabi will be hosting UFC 280: OLIVEIRA vs MAKHACHEV on October 22. The hotly anticipated fight night includes two title bouts and doubles up as the headline event of Abu Dhabi Showdown Week (ADSW) 2022, which runs from October 17-23.

The week-long festival of mixed martial arts and lifestyle events is the fourth edition of ADSW since the Department of Culture and Tourism – Abu Dhabi (DCT Abu Dhabi) announced its ground-breaking five-year partnership with UFC to bring high-profile fights to the UAE capital.

UFC President Dana White has referred to the UAE capital as the “international home of UFC” and with a range of events across a variety of sports – from jiu-jitsu and championship boxing to Muay Thai and judo – the emirate’s reputation is growing globally. Yet for those in the region, combat sports have already been popular in Abu Dhabi for more than a quarter of a century.

Sheikh Tahnoon Bin Zayed Al Nahyan, National Security Advisor of the UAE, was studying in California in 1998, when he watched Brazilian jiu-jitsu expert Royce Gracie dominate some of the earliest UFC events. Inspired to train jiu-jitsu, Sheikh Tahnoon returned to the Emirates with intent on spreading the word, and set in motion plans to create the Abu Dhabi Combat Club Championship (ADCC).

Since then, jiu-jitsu in the Emirates has evolved to become the country’s national sport with a host of national, regional, and international events being held in the country. With the support of the country’s leadership and the UAE Jiu-Jitsu Federation (UAEJJF), jiu-jitsu has also become an integral part of the schools and national service curriculum. 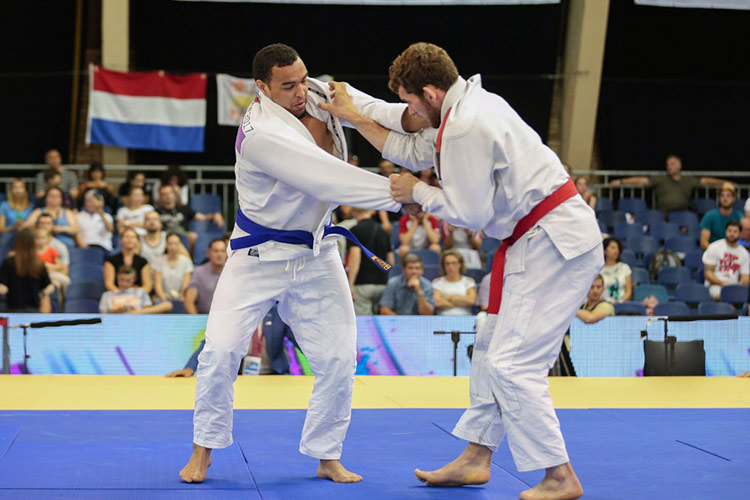 Abu Dhabi has continuously rolled out its mats, hosting events such as the Jiu-Jitsu World Championships, the Asian Championships, and the ADWPJJC, where various Emirati male and female champions have successfully represented their country and won various medals. Multiple domestic championships and training programmes have also contributed to this growth.

While jiu-jitsu is undoubtedly the instigator for combat sports growth in the UAE, Muay Thai and kickboxing have also both seen tremendous growth in Abu Dhabi in recent years. The UAE Muay Thai & Kickboxing Federation, which was founded in May 2017 and serves as the sports’ official governing body in the country, has made significant strides towards growing both strike-based sports and bringing their pillars together in a way that raises public awareness.

The judo scene in Abu Dhabi is also extremely active, helped no doubt by Sergiu Toma making history at the Rio Olympics in 2016 when he secured the second medal in UAE history, taking bronze in the Men’s 81kg category in Brazil.

As a result of growing interest, the UAE hosted the Abu Dhabi Grand Slam last November, attracting 223 judokas from across 41 countries and five continents. It will return this October.

The presence of championship boxing is also growing in the capital. In May this year, some of the biggest names in boxing and MMA – including Floyd Mayweather and Anderson Silva – clashed in front of a sold-out crowd at the Etihad Arena on Abu Dhabi’s Yas Island, during the Abu Dhabi Boxing Unity Event.

The venue will come under the boxing spotlight once more when it hosts the WBA light heavyweight title fight between Dmitry Bivol and Gilberto “Zurdo” Ramirez on November 5. The bout, organised by DCT Abu Dhabi and Matchroom Boxing, pits two undefeated boxers against each other, bringing the attention of a global audience to UAE capital once again. It is the inaugural event in the new Champions Series and promises to be the first of many high-profile bouts in the emirate.

With such solid foundations in combat sports, Abu Dhabi’s growing relationship with MMA was almost inevitable. While the 2019 partnership between UFC and DCT Abu Dhabi represented a landmark agreement for both parties, it was not the fight series’ first involvement with the UAE capital – UFC 112: Invincible was held on Yas Island in 2010 and Fight Night 39: Nogueira vs Nelson took place in 2014.

The 2019 partnership can be credited with kickstarting the significant growth of MMA across the country, paving the way for the UAEJJF to establish a committee, the UAE Mixed Martial Arts Federation, to coordinate all combat sports activities in June 2021.

The organisation aims to develop a variety of MMA disciplines with the aim of enhancing presence, ethics, and values as well as developing a new generation of athletes who can compete on national and international stages.

The International MMA Federation’s Youth World Championships was held in August 2022 at Abu Dhabi’s Jiu-Jitsu Arena, marking the second IMMAF event to be staged in the UAE.

At the Youth Worlds, the UAE national team won gold at an event widely considered a remarkable success. Attracting a record 486 participants from 41 nationalities, the event saw Jasem Al Hosani become the first global champion from the UAE. With a three-year agreement with the IMMAF, Abu Dhabi will host the Youth World Championships until 2024.

Hajj 2022: These are the latest requirements for UAE residents to perform Hajj

VIDEO: Wheel falls off car, rolls down road at high speed for kilometres in Saudi Arabia