A match in progress during Volleyball Championship at the Nas Al Sheba Sports Tournament in Dubai.

Al Jawareh registered an easy 3-0 victory over Zabeel to take top spot in Group B in the Volleyball Championship at the Nas Al Sheba Sports Tournament in Dubai on Monday.

Riding on Atos Ferreira’s superb all around efforts, Al Jawareh won the first two close sets, 25-21, and 25-23. With a flurry of powerful serves and conversions off free balls, Al Jawareh quickly established a lead and later wrapped up the game after winning the third set, 25-16, against their rivals.

Al Jawareh rose to the top of the standings with five points, while Spider are in second position with two points, followed by Zabeel, who has collected one point so far in the tournament.

Abdulla Mohammed Al Basti, Secretary General of the Executive Council of Dubai, graced the occasion and watched the volleyball and padel championship matches.

Basti met Sheikh Saeed Bin Maktoum Bin Juma Al Maktoum, President of the UAE Padel Tennis Association, and congratulated him on the UAE national team’s victory in the final of the inaugural edition of the Gulf Padel Cup. 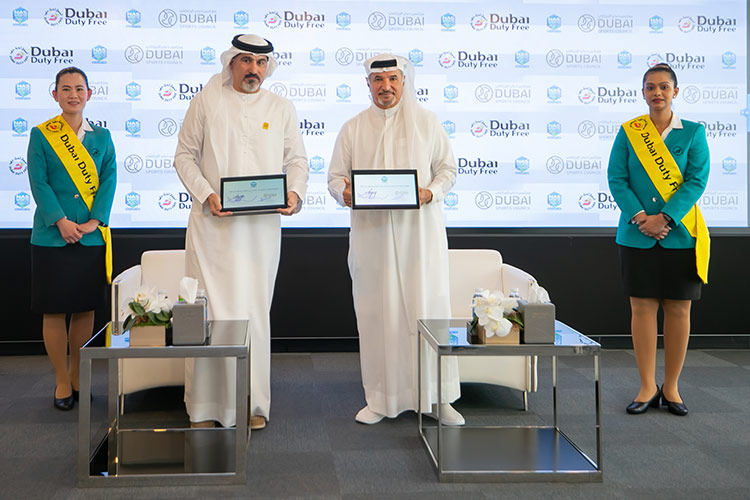 Saeed Hareb and Salah Tahlak pose for a picture after signing the agreement.

Major General Saif Al Zari Al Shamsi, Commander-in-Chief of Sharjah Police, was also in attendance. He watched the match between the Emperor and the Spider. Later, he met with a number of players and praised the high level of the competition.

The Padel Tennis Championship witnessed some exciting quarter-finals clashes in the Emirati and Expat category and Advanced Men’s category.

In the Emirati and Expat category, Roberto Rodriguez and Faris Al Janahi qualified for the semi-finals after defeating Hamad Abdullah and Francisco Javier Rodriguez 6-3, 6-1.

In the Advanced Men’s category, Javier Garcia Lopez and Martin Noschese Noschesetenis stormed into the semi-final with a thumping 6-0, 6-0 win over Sami El-Sayed and Xavi Mason.

In the men’s professional category, Seiji Meos and Kenneth Kauenberg moved ahead with a 6-0, 6-4 over Sheikh Rashid Ammar and Fermin Batata.

Dean Mcfarlane and Federico Morales advanced to the next round after defeating Muhammad Al Shamsi Ali and Salem Al Holi 7-5, 4-6, 10-7.

Omar Muhammad Ibrahim, Amer Ahli and Jean-Eric Morten and Maru Diaz also secured their spots in the next round.

Meanwhile, extending sponsorship of the NAS Sports Tournament, Dubai Duty Free renewed a deal for the ninth edition of the event.

Colm McLoughlin, Executive Vice President and CEO of Dubai Duty Free, said: “We are pleased to once again support the Nad Al Sheba Sports Tournament 2022, which has grown by leaps and bounds in stature and attracted a large number of participants. We are also pleased to have a number of our employees taking part in some sporting events.”

UAE has no plans to levy income tax, says minister

Saudi player Yasser Al Shahrani reassures fans about his health, flies back to Riyadh for surgery