Rafael Nadal returns the ball during a match against Carlos Alcaraz at the Mutua Madrid Open tennis tournament in Madrid on Friday. AP / Reuters

Carlos Alcaraz overcame an injury scare on his way to a milestone victory over Rafael Nadal on Friday to set up a blockbuster semi-final against Novak Djokovic in Madrid.

Alcaraz entered the contest with a 0-2 record against Nadal, but knew he had his chances given his opponent’s lack of match play.

Nadal was out of action for six weeks nursing a rib injury, and arrived to Madrid with little to no preparation on clay.

In an eventful quarter-final at the Caja Magica, the 19-year-old Alcaraz defeated 21-time Grand Slam champion Nadal 6-2, 1-6, 6-3 to post a tour-leading 26th victory of the season.

“It means a lot to me, all the hard work that I put in every day paid off today to beat Rafa, beat the best player in history on clay, it means a lot to me,” said Alcaraz, who is the first teenager to defeat Nadal on a clay court. 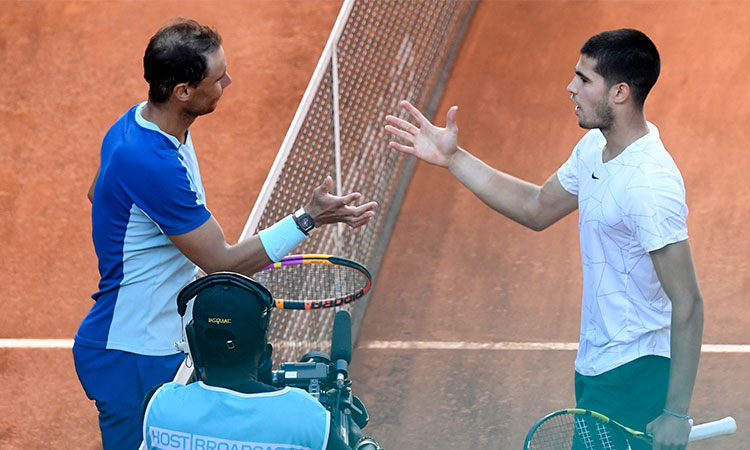 “It affected me a lot the fall in the second set but when I lost the second, I went to the bathroom and I believed I was able to get back, I was able to do my best, try everything on court, fight until the last ball and I think it was the key.”

The first three games went against serve and lasted over 20 minutes before Alcaraz finally held for a 3-1 advantage. Nadal mustered just one more game in that set as Alcaraz snatched a commanding lead.

In the third game of the second set, Alcaraz took a tumble trying to retrieve a ball and he had a lengthy medical timeout at 1-2 to get his ankle taped. Replays showed Alcaraz had badly rolled his ankle.

The seventh seed got broken upon resumption of play as Nadal inched ahead 3-1, but then another interruption came related to someone in the crowd.

After a long pause, Nadal held and ran away with the set as Alcaraz looked visibly restricted in his movement.

Alcaraz took a toilet break and appeared to move better at the start of the decider, leaping to a 3-1 lead. It was all he needed to complete the win in two hours and 28 minutes and set up an exciting clash with Djokovic.

“Of course, I’m focusing on tomorrow. I will text (David) Nalbandian to see how he did it. I will fight and let’s see what happens tomorrow,” joked Alcaraz, referring to Miomir Kecmanovic’s coach David Nalbandian, who defeated both Nadal, Djokovic and Roger Federer on his way to the Madrid title in 2007.

The world number one will face Alcaraz for the first time and heaped praise on the young Spaniard, having spent some time with him practicing earlier this week.

“I love to watch him play, as a lot of other players on the tour. He’s fantastic for our sport, no doubt. I think it’s great that we have a young player who is doing so well and giving a new fresh breath to the tennis world,” said Djokovic.

“Seeing that and knowing that he’s a very nice guy, very humble with good values, is a perfect combination.”

Djokovic started his quarter-final with a break and it was all he needed to grab the opening set in 33 minutes.

Hurkacz dropped serve in game five of the second set as Djokovic once again took control.

The Polish 12th seed saved two match points on his own serve at 5-3, forcing Djokovic to serve out the win. And the 34-year-old Serb had no trouble closing, moving into the final four with an 81-minute success.

Djokovic has not competed much in 2022 due to his vaccination status that has prevented him from playing in Australia or entering the United States.

His win on Friday was just his seventh of the year and he’ll be trying to make a second final of the season, having placed runner-up in Belgrade last month.

Djokovic received a walkover in the last 16 when Andy Murray pulled out with stomach illness.