Angelo Mathews throws a ball during a practice session on the eve of their second Test match against Pakistan at the Galle Cricket Stadium on Saturday. AFP

Angelo Mathews was one of the beneficiaries of Kumar Sangakkara’s youth push in 2009, when he made his Test debut at age 22 in Galle against Pakistan. Thirteen years later, he’s set to play in his 100th Test.

It’s at the same venue and against the same opposition. The second Test between Sri Lanka and Pakistan starts on Sunday.

In the last two years, Mathews has lost his place in white ball cricket but he’s been the leading batsman on the Test team. He produced back-to-back hundreds (199 and 145) to help Sri Lanka win a Test series in Bangladesh in May and he’s on the verge of 7,000 Test runs.

“It would be nice to get to 10,000 Test runs. Not many guys have done that and that’s something that I want to achieve,” the 35-year-old Mathews said on Saturday. 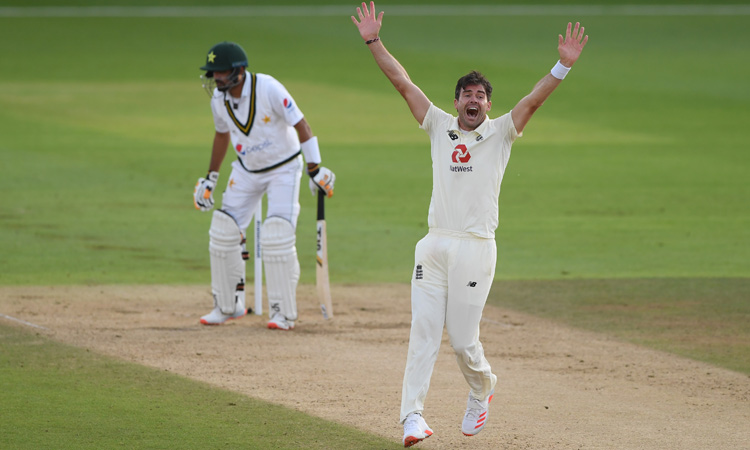 Jimmy Anderson in action during a match against Pakistan. File

“Jimmy Anderson is my inspiration,” he said of England’s record wicket-taker. “At the age of 40, he’s still delivering and he wants to do it for a couple of more years. It’s the drive that you have. This is not going to stop here and I still have few more years left. Age is just a number and I’ll work on my fitness.”

From a young age, Mathews impressed. He featured in two ICC Under-19 World Cups captaining the 2006 edition and in his first major ICC event — the 2009 T20 World Cup in England — he was the standout performer as Sri Lanka finished runner-up to Pakistan.

Not just with his batting, but some terrific fielding efforts and decent spells with the ball including three wickets in his first over in the semifinal match against the West Indies at The Oval where all three batters were bowled.

It didn’t take Mathews much time to find his feet in international cricket, becoming a regular early in his career. A seam bowling all-rounder is someone Sri Lanka had desperately searched for with little luck and the arrival of Mathews put an end to their worries. 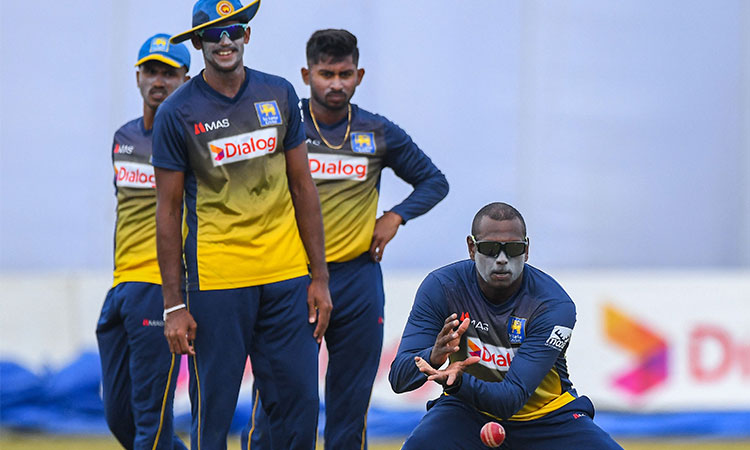 Angelo Mathews fields a ball during a practice session at the Galle Cricket Stadium in Galle. AFP

Mathews was elevated to the captaincy at the age of 25 despite the team comprising many seasoned campaigners.

Under his leadership, Sri Lanka reached new heights by winning a Twenty20 series in Australia in 2013 and beating England in their own backyard in a one-day international and test series the following year.

Mathews scored a test hundred at Lord’s in his first appearance at the home of cricket and followed it up with a match-winning 160 in Leeds to back up his four-wicket haul. It was Sri Lanka’s first-ever test series win in England.

Mathews also was Sri Lanka’s captain when they swept Australia 3-0 in a test series in 2016. Soon after, he was hit by injuries. A series of hamstring, ankle and quadriceps injuries saw him frequently sidelined. He stepped down from the captaincy in 2017 and as a result of injuries concentrated on batting alone.

“Something that always inspired me was his passion for the game. He’s been always a quick learner and has so much to offer,” Karunaratne said. “Hopefully we can make this a memorable game for him.”