Winner Asad Noor Muhammad and Luis Torrealba and pose for a picture after the presentation ceremony.

The first edition of the table tennis competition held at the TCCF was welcomed by the players, who hailed the top-notch facilities of the club.

Table tennis enthusiasts from across the UAE took part in the tournament, which was held under the strict COVID-19 measures laid down by the health authorities.

The competition was held in three rounds. Asad Noor Muhammad and Luis Torrealba managed to reach the final after winning the qualifying rounds. The final clash between Asad Noor and Torrealba kept the raucous crowd on the edge of their seats. Finally, Asad Noor prevailed over his rival to grab the top honours.

Trophies and certificates were distributed to the winners of the tournament. 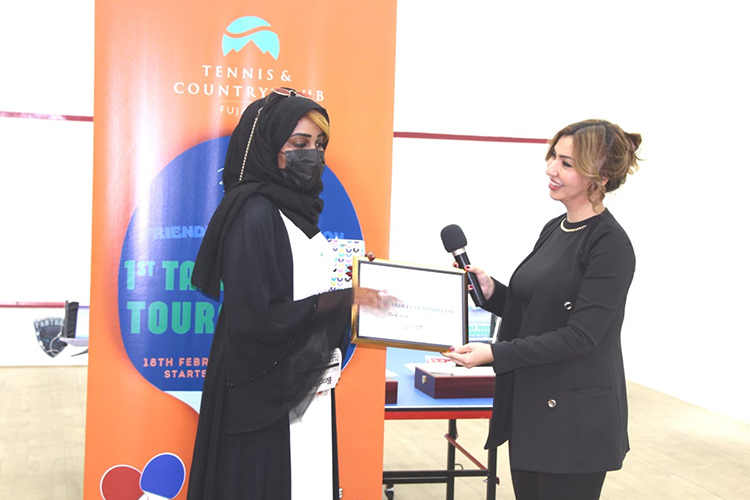 Highlighting the purpose of organizing an amazing event, Hania Reggi, Senior Sales and Marketing Manager of Fujairah Tennis and Country Club, said: “The club has a rich history of organizing events for youths to promote a healthy lifestyle and an opportunity to sharpen their skills.

“Table tennis is a new addition to the roster of sports events we organise at the club.

“Such events fit well with the club’s policy of providing upcoming players a platform to exhibit their talents. The club has an effective year-round sports calendar that encourages participants from all groups of the community to come and play at the club.

This also gives the Fujairah Tennis and Country Club an opportunity to position itself as a premier host of thrilling sports events,” Hania added.

Hailing the Fujairah Tennis and Country Club for organizing a hugely successful event, Amin Muhammad from the Institute of Applied Technology said: “Table tennis is a fantastic addition to squash and other sports at the club. There have not been any table tennis tournaments in Fujairah for years. I thank the club for organizing this event.”

Mustafa, a veterinary doctor, said: “For a long time, we were looking for a place to play competitive table tennis tournaments, and finally the search ended with Fujairah Tennis and Country Club. I was really excited when I came to know that the club had been organising a table tennis event.”

Amjad from HSBC said, “I enjoyed my time at the tournament, and it was well organised. I hope they will host more table tennis events in the future, which will eventually help the sport grow in Fujairah.”