Australia, led by a sublime 170 from Alyssa Healy, rewrote the record books to beat a valiant England by 71 runs in the Women’s World Cup final in Christchurch on Sunday.

Australia amassed a daunting 356 for five but the defending champions England, faced with a record target, kept up the run rate but ran out of wickets to be dismissed for 285 in the 44th over, with Nat Sciver unbeaten on 148.

The victory continued Australia’s dominance of the 50-over format with their seventh title from 12 World Cups and extended their one-day international record to 38 wins from 39 matches over the past four years.

Against England, they lost the toss but nothing else.

England captain Heather Knight put Australia into bat, noting her side had bowled “outstandingly well” at Hagley Oval, but Australian openers Perry and Rachael Haynes were not listening. 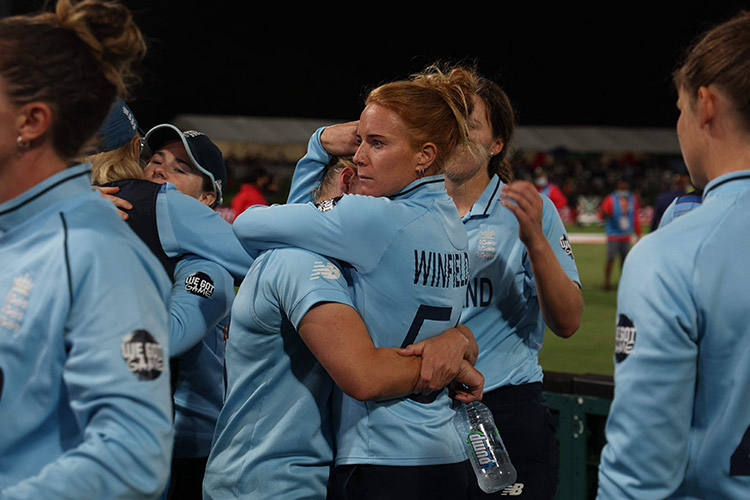 They showed patience, scoring a sedate 26 off the first eight overs before Healey went on the rampage, paying the bowlers no respect as she pounded all points of the boundary with 26 fours.

The Healy and Haynes 160-run opening stand was a record partnership for any wicket in a World Cup final.

England could have claimed both wickets in the 21st over, with Australia still in the 90s, when Healy and Haynes were dropped off the bowling of Kate Cross.

It took Australia 22.2 overs to bring up their first 100, 13 more overs for the second hundred but just nine overs for the third, helped by England returning to the poor fielding which had plagued their start to the World Cup when they lost their first three games. 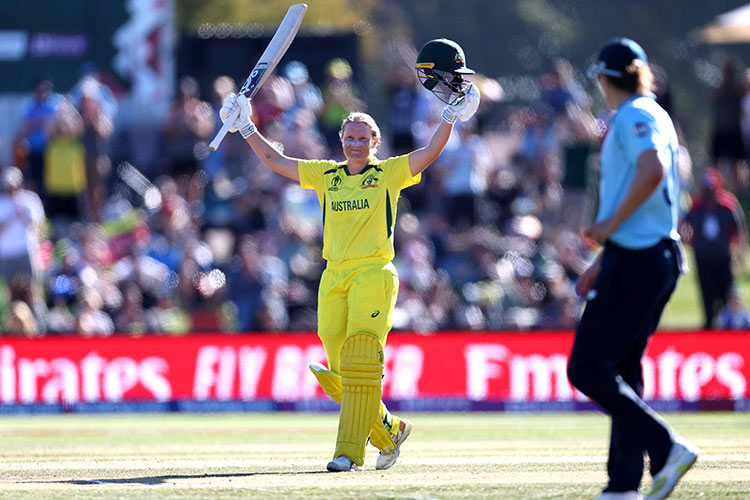 Australia’s Alyssa Healy celebrates her century during the final match against England at the Hagley Park Oval in Christchurch on Sunday. AFP

When Haynes went for 68, Beth Mooney joined Healy in a 156-run partnership before Healy’s extraordinary innings ended in the 46th over when she missed an Anya Shrubsole delivery outside off stump and was stumped.

Mooney quickly followed for 62 as Australia lost four wickets in a push for runs over the last four overs, with Elysse Perry finishing not out 17 after coming in at number seven on her return from injury.

Anya Shrubsole was the one England bowler to perform with credit with three for 46 off her 10 overs — the figures inflated by the final over which cost 15 runs.

England made a determined effort to stay within reach of the required run rate, but were hampered by wickets falling at regular intervals.

Sciver’s 148 was the second highest score in a Women’s World Cup final, but the next best for England was 27 by opener Tammy Beaumont.

For Australia, Jess Jonassen took three for 57 and Alana King finished with three for 64.