Joe Root is hit by the ball (L) and Marnus Labuschagne plays a shot during the second Test match. Reuters / AFP

The 27-year-old’s maiden Ashes century at Adelaide helped Australia go 2-0 up in the five-match series against England ahead of the third Test in Melbourne starting on Sunday, Dec.26.

Middle-order batter Labuschagne has climbed to the top of the ICC Test Player Rankings for batters for the very first time after sensational performances in the two matches of the Ashes so far.

With career-best 912 rating points, he has gone past England captain Joe Root (897), who drops to the second spot.

Root, who returned to the number one position in August, has amassed 1,630 runs at an average of 62.69 so far in 2021 and a further 159 in Melbourne would set a new record for a Test batsman in a calendar year. 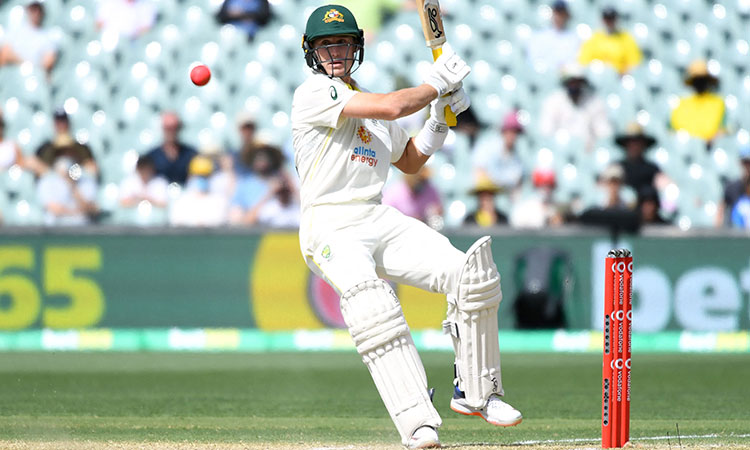 Labuschagne, the ninth Australian man to cross the 900-point mark in the ICC’s Test batting rankings, is ahead of Root, with Australia’s Steve Smith third, New Zealand captain Kane Williamson fourth and India’s Rohit Sharma fifth in the latest standings published on Wednesday.

Ranked fourth before the series, Labuschagne rose two spots to No.2 after scoring 74 in Australia’s win in the Brisbane Test. In the second Test at Adelaide, he scored a hundred and fifty (103 and 51) as Australia thrashed England by 275 runs to go 2-0 up in the Ashes.

His teammate Mitchell Starc broke into the top-10 for Test bowlers after returning figures of 6/80 in the second Test, which included a four-for in the first innings that helped reduce England to 236. He moves up to the ninth spot.

Starc was also quite handy with the bat in both the innings, scoring an unbeaten 39 and 19, which sees him climb a spot in the Test all-rounders’ ranking to No.6.

For England, captain Root attained his career-best rating in the rankings for all-rounders, rising two spots to No.10 after scoring 86 runs and picking three wickets in the second Test.