Bangladesh players appeal unsuccessful for Virat Kohli wicket during the third day of the second Test match in Dhaka on Saturday. AP

Off-spinner Mehidy Hasan claimed 3-12 on day three as Bangladesh hunted a stunning series-levelling win by reducing India to 45-4 as the touring team chased a victory target of 145 in the second cricket test on Saturday.

Axar Patel was unbeaten on 26 for India, which won the first Test by 188 runs, on a tricky, turning surface while nightwatchman Jaydev Unadkat was three not out.

Four of the Indian top five were out for single figures after captain Shakib Al Hasan made the initial breakthrough by dismissing opposite number KL Rahul for two. Mehidy then got in on the act, having Cheteshwar Pujara stumped for six.

Mehidy also had Shubman Gill stumped by Nurul Hasan for seven before removing talisman Virat Kohli for one as he was caught at short leg.

“The wicket is difficult but if one of the batters can play a long innings we can win,” India paceman Mohammed Siraj said.

“Axar looks positive. We hope he will carry on and then we have Shreyas Iyer and Rishabh Pant who are in form.” 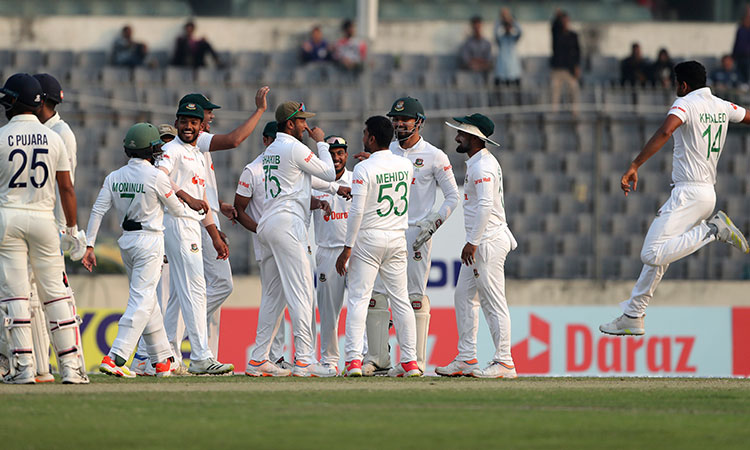 Earlier, Liton Das hit 73 and Zakir Hasan, playing in his second Test, made 51 as Bangladesh was bowled out for 231 in its second innings. Liton was dropped twice by Kohli, who also spilled a chance off Nurul (31).

After resuming on 7-0, Bangladesh made a poor start to the day when off-spinner Ravichandran Ashwin trapped opener Najmul Hossain lbw for five.

But Liton and Zakir held the innings together as left-arm spinner Axar worked his way through the batting order with 3-68.

“It’s important to win the game and draw the series,” Liton said. “We know batting in the fourth innings is always tougher on this wicket so we are confident of winning. They still need 100 runs and things won’t be easy. If we can take two wickets early tomorrow it will be our game.”