Ebadot Hossain walks from the field at the end of the Blackcaps second innings during play on day five of the first Test at Bay Oval on Monday. AP

The tourists needed only 40 runs in their second innings for the historic win, their first ever in New Zealand and only their sixth in 61 away Tests.

The match was wrapped up in one session on the final day as Ebadot Hossain took a career best six for 46 and New Zealand were rolled in their second innings for 169.

It was a “David and Goliath” result, with Bangladesh ranked ninth in the world while world Test champions New Zealand are second.
It was also New Zealand’s first loss in 16 home Tests over the past four years. 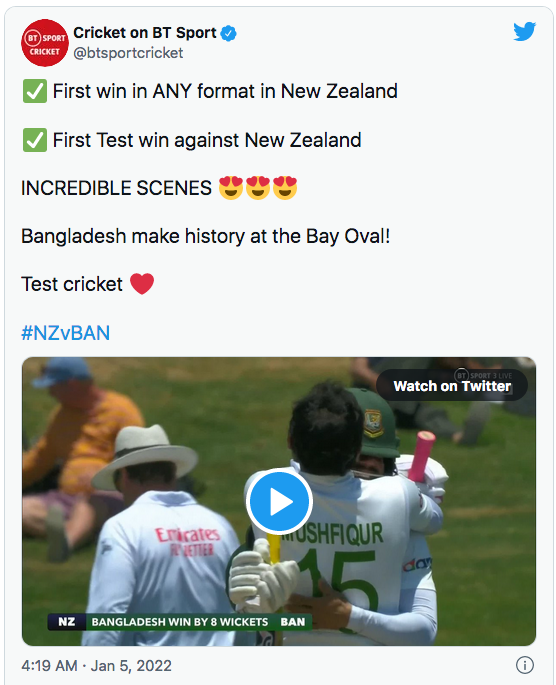 Bangladesh have previously lost all 32 matches played in New Zealand across all formats, including nine Tests, and they arrived to start this tour following back-to-back losses at home to Pakistan. But they attacked this Test with confidence and apart from a 138-run second-wicket stand by Devon Conway and Will Young in New Zealand’s first innings, the tourists have largely been in control.

After New Zealand were dismissed for 328 in their first innings, Mominul Haque (88) led Bangladesh to 478, a 130-run lead on a pitch which stayed true and did not have the usual bias towards fast bowlers regularly seen on New Zealand wickets.

Then, thanks to a canny reading of the game by bowling coach Ottis Gibson, Bangladesh only needed 73.4 overs to knock over New Zealand in their second innings. 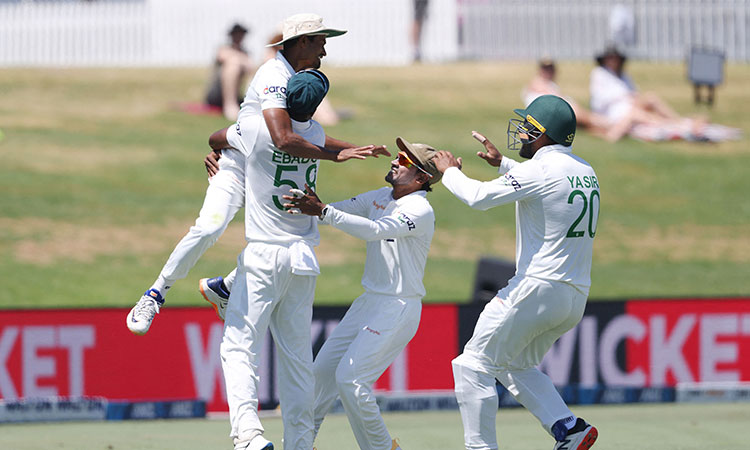 Gibson had noted the Bay Oval wicket was not delivering slip catches, which are common in New Zealand conditions, and he called for wicket-to-wicket bowling.
“It’s different to how New Zealand bowl, they didn’t bowl to length, they went short. That’s their tactic, it works for them.

“(Neil) Wagner’s very good at it, but we’re different, we try to bowl at the stumps a lot more and it’s really pleasing to see that it worked for us,” he said.
“Maybe the New Zealand batters underestimated us. The discipline we’ve shown is fantastic.”

Ebadot relished the instruction and produced by far his best bowling figures. He removed first innings centurion Devon Conway for 13, and in a quick burst claimed Will Young (69) along with Henry Nicholls and Tom Blundell without scoring.

On Wednesday morning he accounted for Ross Taylor (40) and Kyle Jamieson (0), while Taskin Ahmed and Mehidy Hasan mopped up the tail.

With Mahmudul Hasan Joy requiring stitches to a split hand, Najmul Hossain Shanto was promoted to opener and contributed 17 to the winning run chase.
Shadman Islam was out for three while the not out batsmen were captain Mominul Haque on 13 and Mushfiqur Rahim on five.