A spectacular late collapse left Pakistan’s Women’s Cricket World Cup campaign in tatters on Monday and handed Bangladesh their first victory ever at the one-day showcase.

Pakistan appeared to be cruising to victory, powered by a maiden century for Sidra Ameen, but slumped to a nine-run defeat after losing six wickets for 26 runs.

Among those dismissed in the spectacular late collapse of the Pakistan innings was Sidra Ameen, who was run out for 104 after posting the first century by a Pakistan batter at a Women’s World Cup.

Pakistan was 183-2 after 42 overs at Hamilton, seemingly well placed to surpass Bangladesh’s total of 234-7 with Ameen in command. But leg-spinner Fahima Khatun, playing her first match at the tournament, sparked the Pakistan collapse with three wickets. Two run-outs added to the chaotic ending. 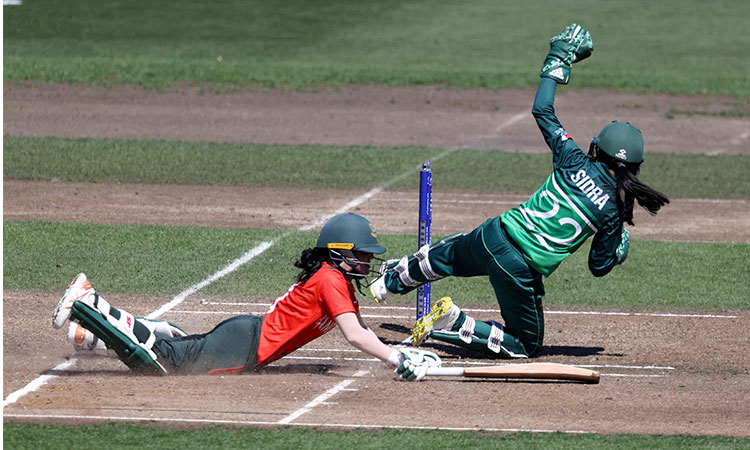 Nigar Sultana makes her ground as Sidra Nawaz (R) tries to run her out. AFP

Pakistan was 183-2 when Khatun claimed the wicket of Omaima Sohail for 10. She also removed Aliya Riaz and Fatima Sana lbw, both for first-ball ducks. In total three Pakistan batters were out first ball as the innings dissolved.

Pakistan lost those five wickets in the space of two overs and endured its most bitter blow when Ameen was run out after doing so much to steer her team toward its first win of the tournament. Khatun finished with figures of 3-38 from eight overs and was voted player of the match.

It was Pakistan’s fourth straight loss at the tournament in New Zealand and gives them virtually no chance of making the playoffs. “It’s very hard to digest, we were in the game but some poor shots from the middle order cost us the game,” captain Bismah Maroof said in Hamilton.

Bangladesh skipper Nigar Sultana praised her side’s never-say-die approach. “I cannot describe this in words because it’s our first ever win in a World Cup and this is history that we’ve made today here,” she said. “We’re looking forward to carrying this momentum through the tournament.”

Pakistan won the toss and opted to bowl but the strategy backfired after Fargana Hoque inspired Bangladesh to 234-7, their highest one-day international total.
Hoque made 71, forging a 96-run partnership with Sultana, who finished on 46, while Sharmin Akhter contributed a well-hit 44. 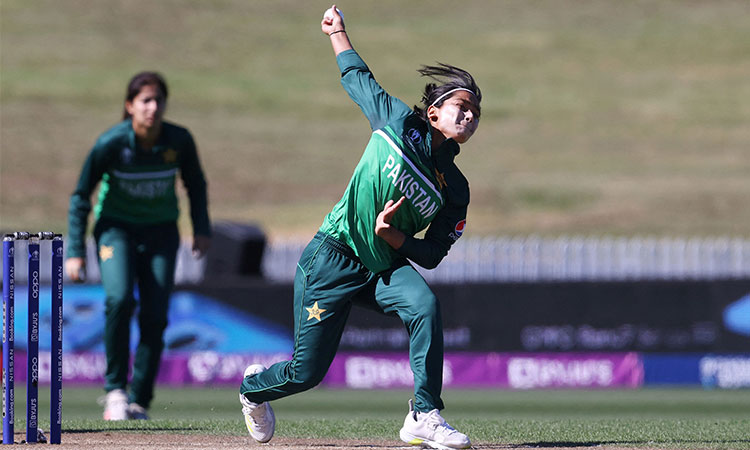 Nashra Sandhu was the pick of the Pakistan bowlers with 3-41, including two wickets in successive balls, one of which dismissed the dangerous Hoque.

Pakistan openers Ameen and Nahida Khan set about chasing the 235-run target with gusto, producing a 91-run partnership which ended when Khan was bowled by Rumana Ahmed.

Ameen ploughed on and seemingly had Pakistan on the brink of victory at 183-2 in the 42nd over, needing 52 runs from 48 balls with eight wickets in hand.

But disaster struck as the batters threw away their wickets, with three departing for first-ball ducks as spinner Fahima Khatun produced a mesmerising spell on her tournament debut to claim 3-38.

Any glimmer of hope for a Pakistan win ended when Ameen was run out for 104 in the 48th over.

Emirates A380 attracts thousands of visitors at the Bahrain Air Show