Sam Curran displays his trophies after the Twenty20 World Cup 2022 final between Pakistan and England at Melbourne Cricket Ground on Sunday. AFP

Though Sam Curran was given the Player of the match award in England’s five-wicket victory over Pakistan in the final of Men’s T20 World Cup for his sensational spell of 3/12 in four overs, the left-arm pacer believes all-rounder Ben Stokes should have received the accolade for his unbeaten 52 taking the side over the line in a chase of 138.

“I don’t think I should be getting this, the way Stokesy played there, to get a 50 in the final, he should get this. He has done it so many times for us! We’re going to enjoy this occasion, very special.”

“(Ben Stokes is) Incredibly special. He is someone I look up to and always turns up when the team needs him. People question him (Stokes), but there’s no questioning him… he’s the man!” said Curran in the post-match presentation ceremony. 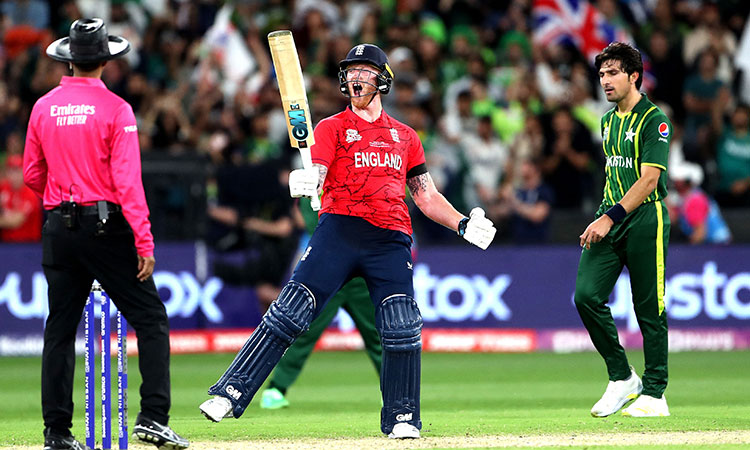 In the finale at the Melbourne Cricket Ground, Curran bowled two overs in power-play and two more in the death overs and didn’t conceded a single boundary. “They had big square boundaries, so into the wicket, it offered for the seamers, nipping around and a challenge for the chase. The way I bowl, I go into the wicket with my slower balls and keep the batsmen guessing. We are World Champions, how good!” he added.

Curran was also named the Player of the Tournament for picking 13 wickets in six matches at an economy rate of 6.5, including 5/10 in England’s Super 12 opener against Afghanistan at Perth.

He had missed last year’s T20 World Cup in the UAE due to a lower-back stress fracture and was roped in by Sky Sports as a pundit, standing at the pitch side when Australia won the trophy in Dubai. A year later, he got his way back into the England T20I side and produced simply sensational performances to be the clutch player for Jos Buttler & Co. in winning the T20 World Cup for the second time.

“To be honest, I am little bit lost for words, it has been a great tournament. First time for me in a World Cup and we have won it. Amazing crowd. I wanted to be adaptable coming into the tournament.”

“I haven’t bowled much at the death before and that is one area I want to keep improving. I want to improve my batting though it is tough to get to bat in this line-up. How good is it to be a World Champ,” concluded Curran.