Top three finishers of the men’s competition pose with dignitaries during the presentation ceremony.

Miles Partain and Andrew Benesh made history after becoming the first American men’s team to win gold at the Volleyball World Beach Pro Tour Challenge at Kite Beach in Dubai on Tuesday night.

It was their maiden title at any level for the American pair, and they also became the first men’s team to start from the qualifications and make it all the way to the top of the podium.

Barbora Hermannova and Marie-Sara Stochlova of the Czech Republic won the women’s competition. Having won silver in the Agadir Challenge in July, it was their team’s second medal overall and first gold on the Beach Pro Tour.

At the first of two back-to-back Challenge events in Dubai, the 20-year-old Partain also became one of the youngest players ever to win at that level. 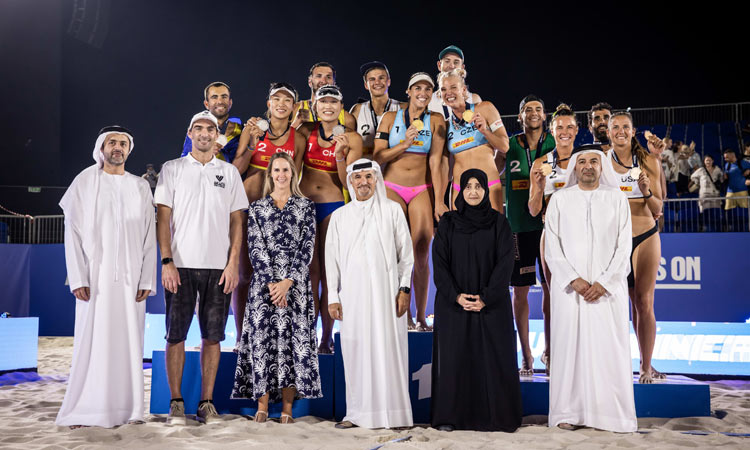 Gold, silver and bronze medallists pose with the medals.

Making their second appearance on Tour, Benesh and Partain won all eight of their matches and dropped only two sets along the way to their first international podium as a pair.

It was the first ever world-level podium for the pairing of 36-year-old Rio 2016 Olympian Pedro and his 26-year-old partner.

In the final, the Americans dominated the first set of the gold medal match.

Scoring five points in a row, 15th-seeded Benesh and Partain ran off with a 10-4 lead and never looked back on the way to a solid six-point margin at the end.

Popov and Reznik started well in the second set, but the last time they had the lead was at 3-2. All they could do after that was fall further behind than they had in the first set.

Keeping up the ante, Benesh and Partain displayed superb skills on the court and confidently cruised on to a comfortable 2-0 (21-15, 21-17) victory.

For the last point, Partain hammered the ball on two, just like he did many times during the match. He was the top scorer of the game with a total of 21 points, all in offence.

“It’s incredibly wonderful because we competed all the way from the qualifying to win the gold medal,” Partain said after the match, “I think we did a really excellent job of taking it one point at a time.”

“Now we get to celebrate for a couple of hours and then we are back in the qualifiers on Thursday. It’s an adventure. It’s a mystery and you never know how it’s going to go, and that’s what makes it fun,” said Benesh.

In both sets of a very tight bronze medal match, Horton and Scoles were pushed to overtime by their Thai opponents, fourth-seeded Taravadee Naraphornrapat and Worapeerachayakorn Kongphopsarutawadee, but managed to squeeze out a 2-0 (26-24, 22-20) victory, with Scoles delivering a match-high 26 points.

The gap never exceeded two points throughout the first set, and the lead went back and forth before the Americans scored three in a row to close it at 26-24. In the second, Horton and Scoles managed to break away with a 7-3 advantage, but the Asians caught up at 17-17 to prompt another interesting epilogue.

They saved two match points for another tie at 20-20, but then served long to gift the Americans another one. Finally, Scoles put an end to the game with a monster block for 22-20.

Meanwhile, in the women’s competition final, despite starting well, the second-seeded team of Hermannova and Stochlova lost the five-point advantage they held at 10-5 in the opening set.

The fifth-seeded team of Xia and Lin rallied to catch up at 17-17 and maintained their lead for the rest of the set thanks to a cross-court shot by Xia. In the second set, the roles were reversed. This time, the Chinese team took the lead right away, but after a 6-6 tie, the Czechs took back the initiative.

At the end, they scored three in a row, with Hermannova’s curve shot down the line sealing the title.

The Czechs were the better side at the beginning and at the end of an otherwise hard-fought tie-breaker. After 12-12, they took the next three rallies, with Stochlova’s kill block bringing in the match point, converted on a wide hit by Lin for a 2-1 (18-21, 21-17, 15-12) Czech victory. Hermannova finished as the top scorer of the match with 32 points to her name, including three blocks and two aces.

“I made serving errors in the first two sets at crucial times, and in the third set up until 11-11, all of my serves went into the net or three meters out. It was mentally taxing. But even in games like this one, when we don’t feel well, our coach Sebastian teaches us how to have fun during the games, and I think that shows on the court,” Stochlova said.