Matteo Berrettini celebrates after beating Gael Monfils in their men’s singles quarter-final at the Australian Open tournament in Melbourne on Tuesday. AFP

Matteo Berrettini created tennis history by reaching the semi-finals of the Australian Open with a rollercoaster five-set victory over Gael Monfils.

“It feels unbelievable (to be the first Italian), hopefully there will be a second one tomorrow with Jannik Sinner,” Berrettini said of his compatriot, who faces Stefanos Tsitsipas in a quarter-final on Wednesday.

“I was really happy with myself, it was a great fight with Gael, a great match, a lot of emotions.

Djokovic to play in Dubai after vaccine controversy

Australian Open allows Where is Peng Shuai shirts after backlash

“I thought I had him in the third set but then I found myself in the fifth. I really fought hard and I put everything into the court.”
In a grinding 3hr 49min night match on Rod Laver Arena, 25-year-old Berrettini grabbed a double break to surge clear in the fifth set after Monfils had roared back from two sets down.

It was Berrettini’s sixth win in seven career five-set battles. 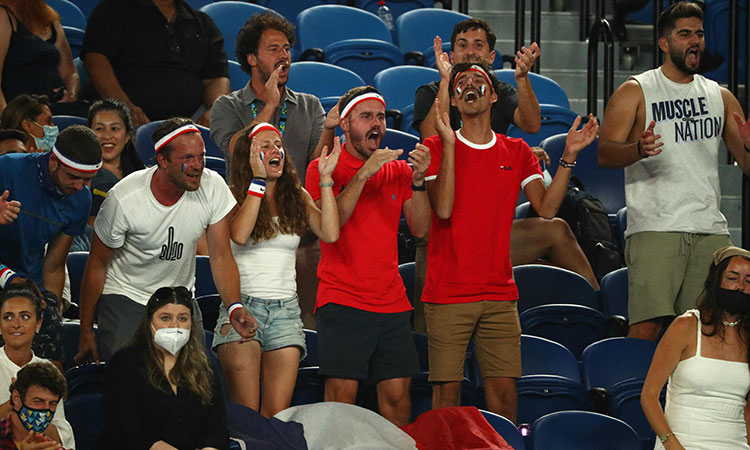 Supporters of Gael Monfils cheer during his men’s singles quarter-final match against Matteo Berrettini at the Australian Open. AFP

There were many drawn-out, attritional games, including a monumental 20-minute Berrettini service hold game of 10 deuces to give him the edge in the 62-minute second set.

It means the 35-year-old Monfils, who won the warm-up Adelaide tournament and had not dropped a set in his previous four matches, came up just short again in his first quarter-final appearance in Melbourne since 2016 when he lost in four sets to Canada’s Milos Raonic.

Monfils credits his recent resurgence to the stabilising influence of his new wife, women’s world number 17 Elina Svitolina. The tennis “power couple” tied the knot in Geneva in July just before the Tokyo Olympics.

COVID-19: Dhs3,000 fine for not wearing facemasks in closed places in UAE