Century-maker Suzie Bates produced a milestone innings as New Zealand beat Pakistan by 71 runs in the Women’s World Cup in Christchurch on Saturday.

It was the final match of the tournament for both sides, and although New Zealand hold a mathematical chance of making the semi-finals, captain Sophie Devine said that was most unlikely and it was a “bittersweet” win to bow out on.

“Absolutely, we’re gutted that we’re not moving forward in this tournament and I want to wish those teams that do manage to go through all the best,” she said.

The tournament hosts posted 266 for eight with Bates scoring 126 before Hannah Rowe took five for 55 to restrict Pakistan to 194 for nine. 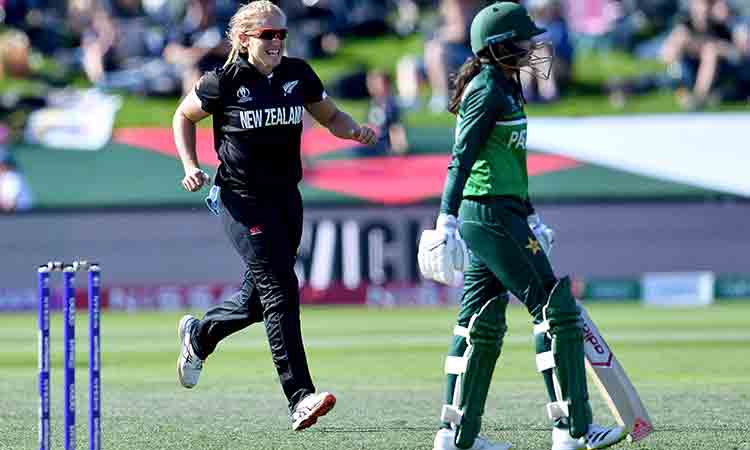 It lifted New Zealand to six points, equal with fourth-placed England and India who each have a superior run rate and a game in hand which sees them both threaten to overtake third-placed West Indies — who are one point ahead but have completed their matches.

At a crowded Hagley Oval, on New Zealand’s first day without Covid-enforced outdoor spectator restrictions, Bates contributed nearly half the New Zealand total and along the way became only the fourth player in women’s cricket to reach 5,000 ODI runs.

Bates also became the first person to score a century in four consecutive World Cup tournaments but believed her player-of-the-match award should have gone to Rowe.

“I just really wanted to take the game deep and make sure we finished off the 50 overs and got a good score on the board,” she said.

“It’s a nice record to have but I thought Hannah Rowe, I could share this player of the match with because she bowled outstandingly.”

Bates was given out lbw on 17 and deliberated on the dismissal until the final second before seeking a review which confirmed the ball was missing leg-stump.

When the opener was eventually dismissed, bowled by Nashra Sandhu in the 43rd over, she received a standing ovation as she walked from the field and New Zealand were well placed at 211 for five with more than seven overs remaining.

But instead of New Zealand pushing up the run rate, Pakistan took the initiative with four wickets for 20 runs before Katey Martin and Frankie Mackay plundered 32 off the final two overs.

Martin finished unbeaten on 30 with 22 of her runs coming off eight deliveries in the final flurry.

The star performer with the ball for Pakistan was Nida Dar, with the spinner taking three for 39 from her 10 overs.

Dar then top-scored for Pakistan with 50 while captain Bismah Maroof contributed 38 but the side were behind the required run rate throughout, and after reaching three for 155 Pakistan added only 39 more runs and lost six wickets.