India’s bowlers, led by off-spinner Sneh Rana (2-15) and left-arm spinner Radha Yadav (2-18), put out an impressive show to set the base for a comprehensive eight-wicket win over Pakistan in their second Group A match of Commonwealth Games 2022 at Edgbaston on Sunday.

After bowling out Pakistan for just 99 in an 18-overs a side affair due to rain, opener Smriti Mandhana slammed an unbeaten 63 and played magnificent shots which oozed class and delight in equal measure to chase down the total with 38 balls remaining.

The eight-wicket thrashing of Pakistan, after a three-wicket defeat to Australia in the opening match, means that India keeps their semi-final hopes alive and are on top of the table with their net run rate jumping from-0.56 to 1.17. 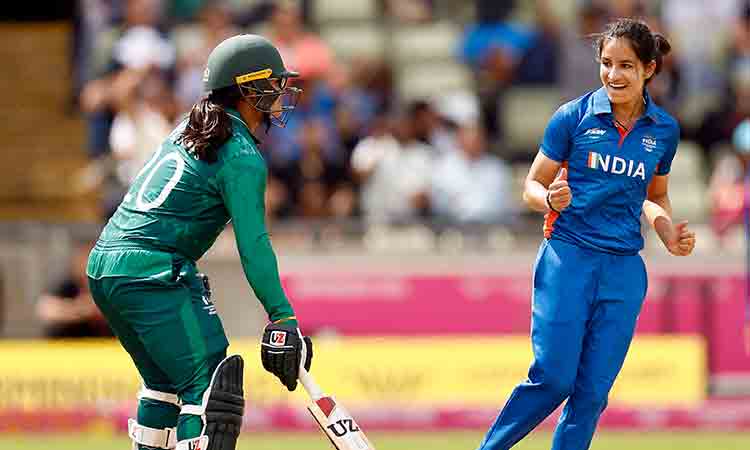 Smriti gave India an attacking start by slog-sweeping Anam Amin for six and followed it up by dancing down the pitch to loft over bowler’s head for four. Smriti’s elegant Sunday extended by using her crease and feet very well to hit Diana Baig for three boundaries, with her bisecting backward point and short third man being the standout.

India continued to deal in boundaries as Shafali Verma smashed Anam for a brutal six over long-on and ended the over with a loft over wide long-off for four. In between, Smriti snatched a four off Anam with a slice over backward point.

It was pacer Fatima Sana’s turn to get some thrashing from Smriti as the left-hander nailed a pull through mid-wicket for four and brought up India’s fifty in just 29 balls by dancing down the pitch to loft over mid-on.

Smriti and Shafali took a boundary each off Tuba Hassan’s first over. But the leg-spinner had the last laugh as Shafali tried to slice a quicker ball but nicked behind to Muneeba, ending the 62-run opening partnership.

Smriti reached her 15th T20I fifty in 31 balls by dancing down the pitch and lofting Tuba for a sensational six straight down the ground. S Meghana, who joined the team late due to Covid-19, got some batting time with a 16-ball 14 before being cleaned up by Omaima Sohail. Smriti finished off the chase in style by dragging Fatima over long-on for four to keep India in the hunt for the knockouts.

Earlier, despite losing the toss and rain delay coming in, everything went right for the Indian bowlers. The pacers got the ball to nip around and then the spinners bowled slow and got some turn as well to keep things tight and never let Pakistan break free.