Winners pose with the officials during the presentation ceremony.

Elite Brazilian athletes rounded off a remarkable weekend, asserting their dominance in the Professionals’ division on the third and final day of the season-ending Abu Dhabi Grand Slam Jiu-Jitsu World Tour finale in the UAE capital.

Men and women in the professional division took to the mats for ranking points and cash rewards as a cheerful audience of supporters and family members watched on.  The enthusiasm at the Zayed Sports City’s Jiu-Jitsu Arena peaked when the crowd was joined by Anderson Silva, the popular Brazilian-American mixed martial artist and former UFC Middleweight Champion.

In the professional competitions, Brazil succeeded in achieving first place as their athletes took 21 gold medals, while the UAE finished in second having secured five golds of their own. 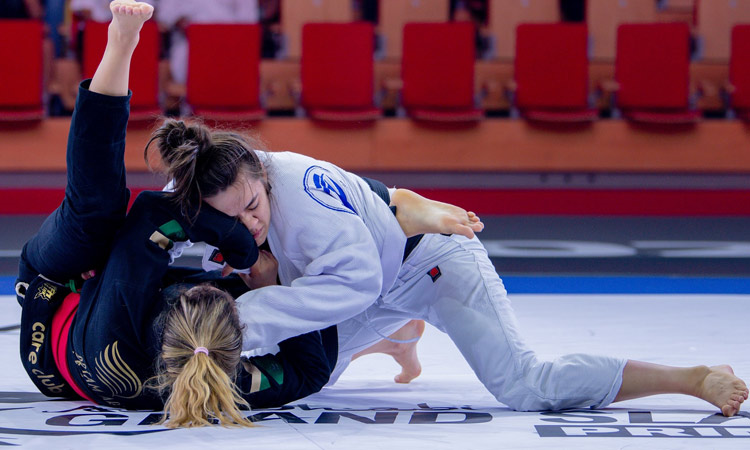 The three-day event was the finale of the season 2021/ 2022 tours that took place in Miami, Rio de Janeiro, Moscow, and London.

“Our men and women performed so well in front of the world’s best athletes. I am extremely proud of their accomplishments,” Mohamed Salem Al Dhaheri, vice chairman of the UAE Jiu-Jitsu Federation, said.

“The most important benefit of the competitions is that they allow our heroes to put their skills to the test against so many talented athletes, which will contribute to their preparation for upcoming tournaments, particularly the World Games in the US in July.”

Tariq Al Bahri, general manager of Abu Dhabi Jiu-Jitsu Pro, added: “As proven by the organisation of more than 100 championships throughout the world and overcoming numerous difficulties and challenges, the UAE and its capital, Abu Dhabi, are progressing from success to success with each tournament. Abu Dhabi is undoubtedly the global capital of jiu-jitsu.”

Hassan Fardan Al Fardan, CEO of Al Fardan Exchange said the UAEJJF and AJP are doing an exceptional job that contributes to enhancing the country’s position on the global jiu-jitsu map.

“This is in line with our wise leadership’s vision, marching us towards excellence on many levels,” he said. “We’re seeing some incredible performances from a group of UAE champions who are taking on the world’s best players with excellent technical skills and zeal.  It is a matter of pride and honour for us.”

Zayed Al Kathiri, a national team player and member of the Baniyas Club, expressed his joy at reaching the top of the podium and earning gold in the brown belt 56kg division, while Asmaa Al Hosani, a purple belt from Palms Sports Academy took bronze in the under-55kg.

“In preparation for the contests, I’ve been working extremely hard,” said Kathiri, thanking his technical staff and fans for support and motivation throughout. Al Hosani meanwhile called her result “a beautiful and unique experience”, adding that while she was aiming for gold, it was amazing to compete against such talented players.

“I’m looking forward to representing my country and national team in future competitions,” she concluded

The AJP recognised the season-long effort of jiu-jitsu heroes following the competitions on Sunday with an award ceremony for the top performers. Brenda Larissa (Rooster Weight), Ana Rodrigues (Light Featherweight), Julia Alves (Lightweight), Thalyta Silva (Middleweight), and Yara Nascimento (Heavyweight) were honoured for their outstanding performance throughout the 2021-2022 season in the Female Professional Brown/Black Belt category.