From L to R: Nizakat Khan walks off after being run out; Scott McKechnie plays a shot; Mohammad Ghazanfa and Ayush Shukla celebrate in Dubai on Wednesday night. AFP

Hong Kong batsman Kinchit Shah usually handles the family diamond business and he sparkled in a losing cause against India, studding an innings of 30 with two fours and a six in the T20 Asia Cup at the Dubai International Cricket Stadium on Wednesday night.

The Mumbai-born vice-captain, who proposed to his girlfriend after the match in Dubai, is part of an eclectic mix of pizza delivery men and university students representing Hong Kong against Asia’s cricket giants in the UAE this week.

The talented band of expatriates have been on the road since June, culminating in a berth in the main draw of the six-nation Asia Cup after winning all three qualifying matches.

They lost to top-ranked India by 40 runs on Wednesday, but only after a fight in their chase of 193.

Their next match against Pakistan on Friday in Sharjah could be their last in the tournament, but skipper Nizakat Khan said they had been flooded with praise from loved ones in their adopted home. 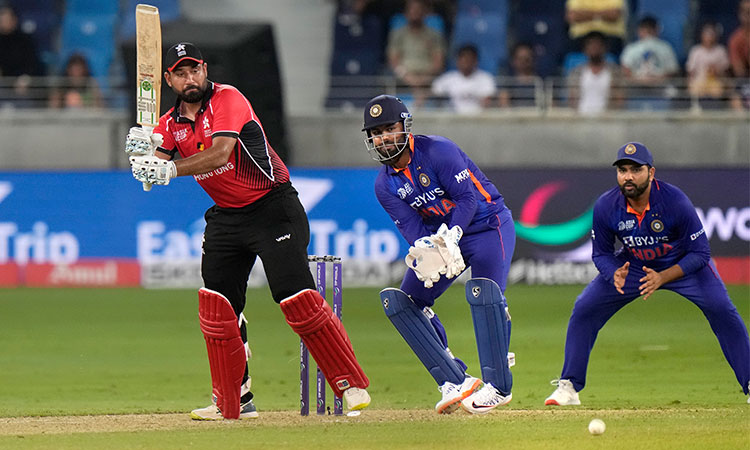 “It’s a big learning curve for us to play against India and Pakistan. We take something out of these two games and hopefully the players learn a lot.”

The team’s media manager Smita Chhetri told AFP that three players, Babar Hayat, Ehsan Khan and Yasim Murtaza, have recently become fathers but have only seen their newborns on video calls. For most players in Hong Kong, cricket is not the only means of livelihood as opportunities for the national team are few and far between.

“A few of our players are doing food delivery service part time,” Chhetri said. “And few of them are teachers as well as handling family businesses like Kinchit Shah.”

Fast bowler Ayush Shukla, a 19-year-old university student, celebrated the wicket of India skipper Rohit Sharma with a scream and fist bumps when he got the opener caught at mid-on for 21.

The experienced Hayat top-scored with 41, Kinchit made 30, Zeeshan Ali was 26 not out and Manchester-born Scott McKechnie smacked an unbeaten 16 off eight balls as they all impressed in a rare chance to play at the highest level.

“These are the opportunities for individuals as well,” said Nizakat, adding his team were making the most of their time at the Asia Cup by picking the brains of world-class Pakistani cricketers.

“We have players that can play franchise cricket and this is the time they can show how good they are.”

Nizakat, 30, an all-rounder who bowls leg-spin, is one of several players from Pakistan’s Punjab region who found their way in the Hong Kong national team. 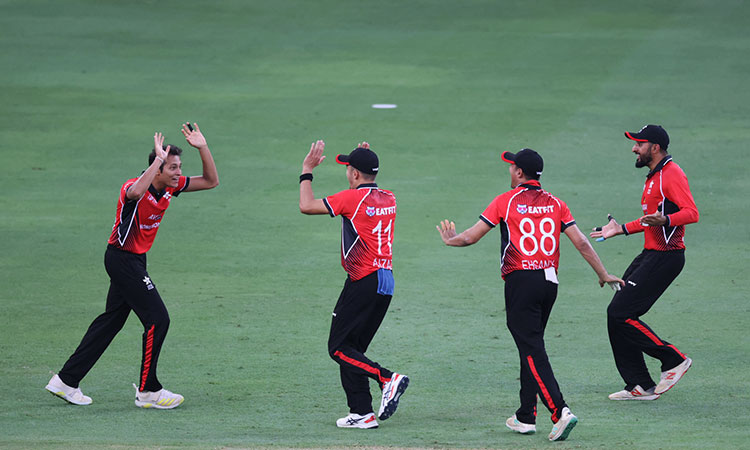 Ehsan Khan, who once represented the city of Rawalpindi in Pakistan, returned final qualifier man-of-the-match figures of 4-24 with his off-spin.

Hong Kong are coached by former Ireland fast bowler Trent Johnston, who said they deserved their place in the top-tier tournament. “They believe in themselves,” he said.

“They go out there and execute their plans, play positive cricket and I think it’s a great opportunity for the world to see how good at cricket Hong Kong is.”

UK may negotiate Cepa, other trade agreements with UAE