Jos Buttler plays shots (L and R) during the final ODI match between England and India at Old Trafford on Sunday. AFP

Jos Buttler anchored England’s innings in their third and final one-day international against India on Sunday, scoring his first fifty since becoming the full-time white-ball captain.

Buttler, who was struck on the helmet twice in the same over from Mohammed Siraj, hit an 80-ball 60 at his home ground of Old Trafford as England scored 259 all out in 45.5 overs.

England recorded the highest score so far in the series, which is level at 1-1, but its bid to set an unassailable total was undermined by Hardik Pandya taking an ODI best 4-24 in seven overs with three maidens.

Jasprit Bumrah was left out due to back spasms but his replacement Siraj exploited a hint of movement, with Jonny Bairstow and Joe Root both out for three-ball ducks in the second over.

Jason Roy (41 off 31) drove expertly then clipped twice to take 12 off his first four deliveries while Ben Stokes (27 off 29) was bullish as they led the recovery from 12-2 to 66 without further loss, but the introduction of Pandya set England back.

Roy skied a top-edge while Pandya then dragged his length back after seeing Stokes on the charge, with England’s test captain only able to loop a return catch. 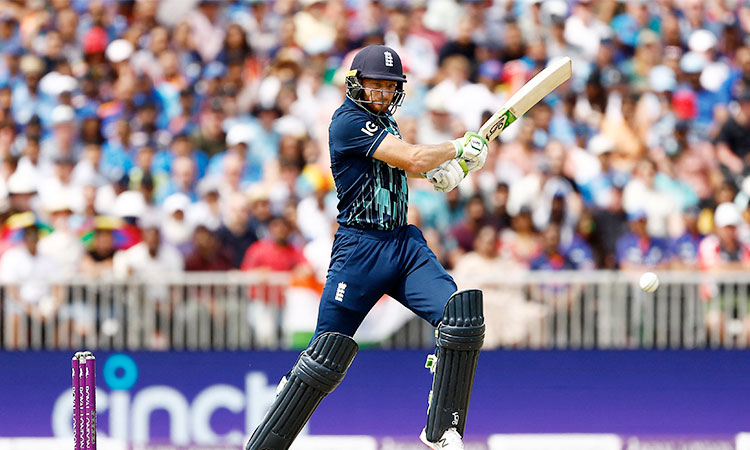 Jos Buttler plays a shot during the final ODI against India. Reuters

Buttler was watchful at first and twice rattled on the helmet after being beaten for pace by Siraj, but he connected with a pull in the fast bowler’s next over before lofting Yuzvendra Chahal over long-on for the first of his two sixes. Moeen Ali also got in the act by scoring 18 in an over off Siraj.

Moeen departed for 34, caught down the leg-side off Ravindra Jadeja. Liam Livingstone (27) fizzed with a couple of pulled sixes, but as he attempted to take down the returning Pandya again, he merely picked out Jadeja at deep square-leg.

Three balls later and Jadeja was back in action again, sprinting to his left and taking a fine low catch to see off Buttler, with Pandya again the bowler.

David Willey (18) and Craig Overton (32) put on a useful 48 for the eighth wicket. Both holed out off Chahal, who then bowled Reece Topley through the gate to finish England’s innings with 25 balls unused.

WGS sets out dialogue to ensure the next destination of aviation