Dinesh Chandimal celebrates after scoring a century during the third day of the second Test match at the Galle Cricket Stadium on Sunday. AFP

Former captain Dinesh Chandimal scored a hundred as Sri Lanka reached 431-6 at stumps on day three of the second Test against Australia on Sunday. Sri Lanka now leads by 67 runs with four wickets in hand.

It was a terrific effort by Chandimal, who stitched some crucial partnerships with the middle order to give the home side the edge after a disappointing batting performance in the first Test that they lost by ten wickets.

Walking out to bat in the third over of the day after the dismissal of overnight batsman Kusal Mendis, Chandimal was aggressive early on in the innings with close-in fielders piling on the pressure. His first scoring shot was a boundary as the right-hander gave Nathan Lyon the charge and drove him past cover.

The very next ball he sent down the track again and lofted the off-spinner over long-off for six. That gave him some breathing space and with the field spreading out, he settled in.

Chandimal and Angelo Mathews shared 83 runs for the fourth wicket as Sri Lanka lost just one wicket in the morning session as they fought their way back into the game. 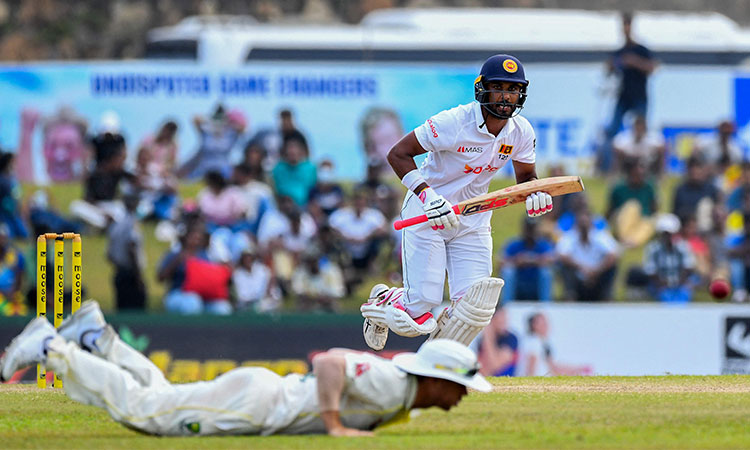 Dinesh Chandimal (R) plays a shot during the third day of the second Test match at the Galle Cricket Stadium. AFP

Chandimal had nicked Mitchell Starc to wicketkeeper Alex Carey when on 30 but umpire Kumar Dharmasena turned down the appeal. Australia had used all their reviews and had it been referred, the on-field decision would have been overturned.

Despite his side falling behind, Australia Head Coach Andrew McDonald was confident that the game is still within reach.

“At the moment we’re behind, that’s our problem, we have to work through that. And tomorrow presents another opportunity in the morning session,” he said. “We have to… keep that lead to about 100 and we’re well and truly in this game with a fantastic batting unit who can still go about their work on what is still a very true surface.”

Soon after completing his half-century Mathews offered a bat pad catch off Starc and Marnus Labuschagne at short leg held on for a good catch.

It was the partnership between Chandimal and debutant Kamindu Mendis – worth 133 runs for the fourth wicket – that gave Sri Lanka the advantage in the game.

Mendis was drafted into the side after Dhananjaya de Silva tested positive for COVID-19 ahead of the game and he made it count with a 50 on debut. It helped that the hometown boy has played a lot of cricket in Galle.

Mendis was thrilled with his performance in front of his home crowd.

“If we get a lead beyond 100, then that would be handy and we can put pressure on them. Pretty pleased to have contributed for the team’s cause with my half-century,” Mendis said.

Chandimal reached his 13th Test hundred with a quick single off Lyon to covers for his second test ton against Australia and the fourth in Galle. This year, Chandimal has hit a purple patch averaging 90 in Tests.

Sri Lanka’s total also went past 400, only the seventh occasion they have done so against Australia.

The partnership was broken when Mendis was bowled attempting to slog leg-spinner Mitchell Swepson. His 61 came off 137 deliveries and included seven boundaries.

Soon Australia had another wicket when Niroshan Dickwella tried to take on Lyon but failed to clear mid-on and was caught by Pat Cummins.

Ramesh Mendis was given out caught behind on four but he successfully reviewed the decision. He had added 22 runs for the seventh wicket with Chandimal.

At stumps, Ramesh Mendis was unbeaten on seven while Chandimal was on 118.

Chandimal’s knock has lasted for more than six hours in which he faced 232 deliveries having hit nine fours and one six.