Dimuth Karunaratne (R) and Babar Azam pose with the Test trophy on the eve of their first Test match at the Galle International Cricket Stadium on Friday. AFP

The economic crisis in Sri Lanka has brought the country to a standstill. There’s a shortage of essential items like fuel, medicine and food. The president has resigned. Despite the hardships, cricket goes on uninterrupted.

The first Test between Pakistan and Sri Lanka gets underway in Galle on Saturday. 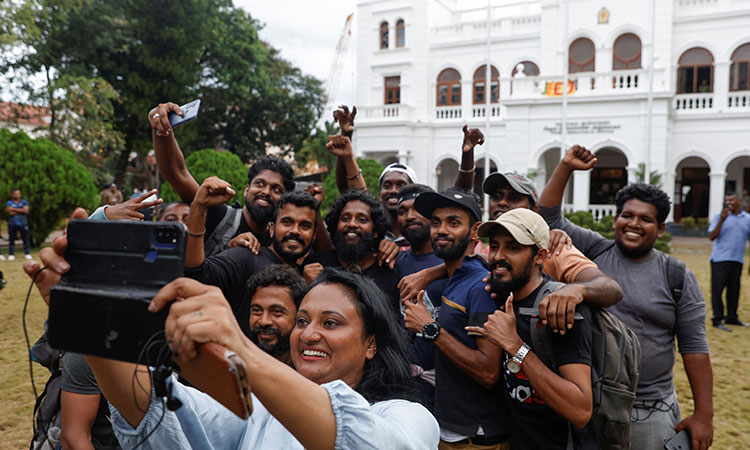 Protesters take a selfie outside the PM House in Colombo. AFP

Last weekend, as Australia played the second Test in Galle, protesters outside the stadium called for the ouster of Sri Lankan President Gotabaya Rajapaksa. An even bigger protest took place in the capital Colombo, less than one kilometre from the hotel where Pakistan’s team was staying.

No protester or political party objected to cricket being played while the country was burning. Everyone knows that cricket is essential for a country that is in severe shortage of foreign exchange. The Australian tour brought an estimated $2 million to Sri Lanka Cricket. The tourism industry also benefited with hundreds of Australian fans turning up for the matches that ended in 1-1 draw.

While the Pakistan series will not generate as much as revenue, it needs to go on for several reasons. Sri Lanka is set to host the Asia Cup later next month and the cricket board and the government are doing their best to ensure the tournament remains on the island without being shifted to the United Arab Emirates. 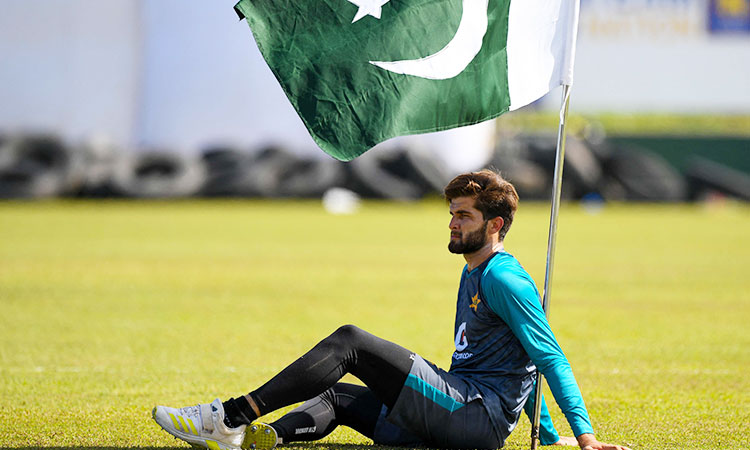 Shaheen Afridi takes part in a practice session ahead of the first Test match at the Galle International Cricket Stadium. AFP

Like the Australian series, the Asia Cup will make SLC richer by several million dollars and more tourists are expected to make the trip to witness one of the best rivalries in sports: India versus Pakistan.

The security detail of Pakistan had warned the team to cancel its training session in Colombo earlier this week as there was civil unrest in the capital. There are moves to shift next week’s second Test from Colombo to Galle.

“When we landed the situation was different but the Sri Lankan board and the security looked after us and that was helpful,” Pakistan captain Babar Azam told reporters. “We didn’t feel that anything could hurt us. We had a good practice game in Colombo and we are looking forward for the series.”

Sri Lanka had won the second test against Australia by an innings and 39 runs having lost the first game by 10 wickets. Spin played a big role in that win earlier this week and skipper Dimuth Karunaratne expected a tougher contest against Pakistan.

“They’re a different team. They are good against the spin. They have done well here on previous tours,” Karunaratne said.

These are two evenly balanced teams with Pakistan No. 6 in ICC Test Rankings and Sri Lanka one spot lower.

Sri Lanka will be without opening batsman Pathum Nissanka after he tested positive for COVID-19; he’s expected to be replaced by Oshada Fernando. Dhananjaya de Silva returns after having missed the second test against Australia also due to COVID. He’s expected to replace Kamindu Mendis, who made a half-century on debut.

For Pakistan, leg-spinner Yasir Shah is likely to make a comeback in the first test. The 36-year-old hasn’t played international cricket in a year due to injuries. He would be quite a handful in these conditions having picked up 24 wickets in the three test series when Pakistan last toured here in 2015.