Cristiano Ronaldo reacts to their defeat as he leaves after the English Premier League football match at Goodison Park in Liverpool on Saturday. AFP

Cristiano Ronaldo on Saturday apologised for knocking a mobile phone out of the hands of a supporter as he left the pitch following Manchester United’s 1-0 defeat to Everton.

Footage on social media emerged which appeared to show the Portugal star clashing with an Everton supporter as he headed for the tunnel at Goodison Park.

“It’s never easy to deal with emotions in difficult moments such as the one we are facing,” 37-year-old Ronaldo wrote on Instagram. “Nevertheless, we always have to be respectful, patient and set the example for all the youngsters who love the beautiful game.

“I would like to apologise for my outburst and, if possible, I would like to invite this supporter to watch a game at Old Trafford as a sign of fair-play and sportsmanship.” 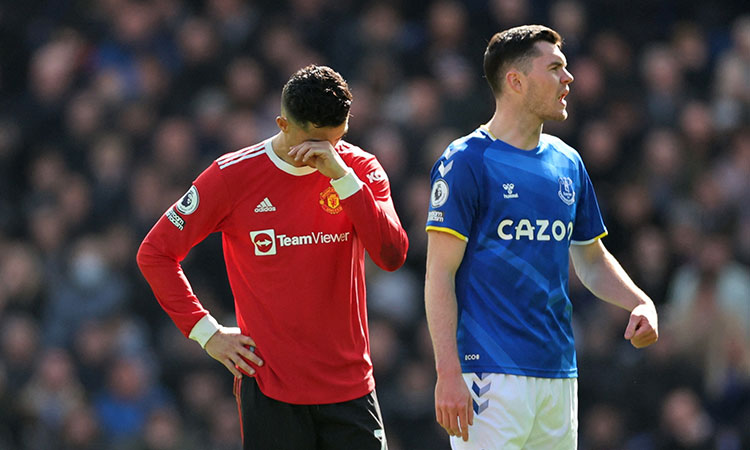 United’s lacklustre performance at relegation-threatened Everton left them in seventh place in the table, six points adrift of the Champions League places.

Police are investigating an incident that saw Ronaldo apparently slapping a phone out of a supporter’s hand as he left the field after a loss at Everton.

The force in Liverpool is appealing for witnesses after footage was posted on social media following United’s 1-0 Premier League loss on Saturday.

“As players were leaving the pitch at 2:30pm, it was reported that a boy was assaulted by one of the away team as they left the pitch,” Merseyside Police said on Sunday.

“Inquiries are under way and officers are currently working with Everton Football Club to review CCTV (video) footage and are carrying out extensive witness enquiries to establish if an offence has taken place.”